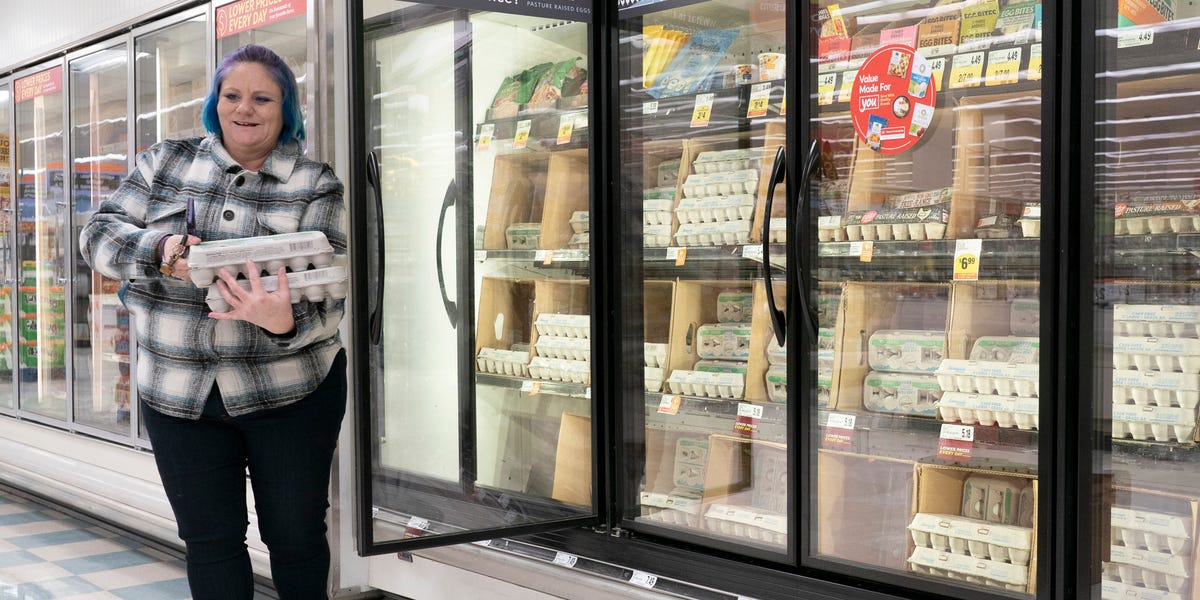 Egg prices rose so fast last month that consumers in some states were paying twice as much as the previous year, according to new data from Instacart.

In the Upper Midwestern states, the average price of a dozen eggs doubled in December compared to the same month in 2021. The price rose fastest in Iowa, where a dozen eggs rose 153% to $4.44.

Neighboring states also saw egg prices at least double. In South Dakota, they were up 137% at $5.00. Shoppers in Wisconsin paid an average of $4.78, an increase of 118%, according to Instacart. Consumers in Minnesota, Nebraska, North Dakota and West Virginia also paid at least twice as much as the previous year.

Iowa consistently produces the most eggs of any US state. In 2019, chickens on its farms produced just over 17 billion eggs, according to the US Department of Agriculture. But the state’s flocks, like those in other parts of the US, they have been devastated by bird flu, leading to soaring egg prices and some shortages.

Despite the increases, states like Iowa still had some of the lowest egg prices in the US. Shoppers in Hawaii, where most food must be imported from out of state, paid $9.73 per dozen. That was the highest price anywhere in the country, despite prices rising just 51% in December, Instacart said.

Florida was the second most expensive state for eggs, at $6.36 a dozen. Prices rose 57% in the month. Instacart data includes the purchases your customers made during the month.

Egg prices are likely to remain high in 2023. Cal-Maine Foods, the largest US egg producer, said in late December that it expects the fallout from avian flu to “continue to put pressure on the decline in the general supply of eggs”. well into this year.

Farms that produce only organic or free-range eggs have been less affected by bird flu, leading to lower prices for those types of eggs than traditional ones in some parts of the country.

The shortage is causing a stir among shoppers. Some are also facing empty shelves.

With such high demand, many supermarket chains like Kroger and Lidl are limiting the number of cartons shoppers can buy.

In December 2022, egg prices increased 11.1% compared to the previous month and nearly 60% higher compared to December 2021, according to the latest Consumer Price Index statistics. The index measures the prices of all purchases, both online and at traditional retailers.

An Instacart search in Orange County, California, on Thursday showed that the price of a dozen cage-free AA grade eggs ranged in price at supermarkets listed on the site from $5.86 at Walmart to $6.39 at Ralphs. , owned by Kroger. A 60-count carton at Costco costs $19.89.

Kroger CEO Rodney McMullen said he expects inflation to moderate later in the year and projects egg supplies to normalize in the coming months as new hens lay eggs.

“We are doing everything we can to minimize that impact,” he told CNBC last week.