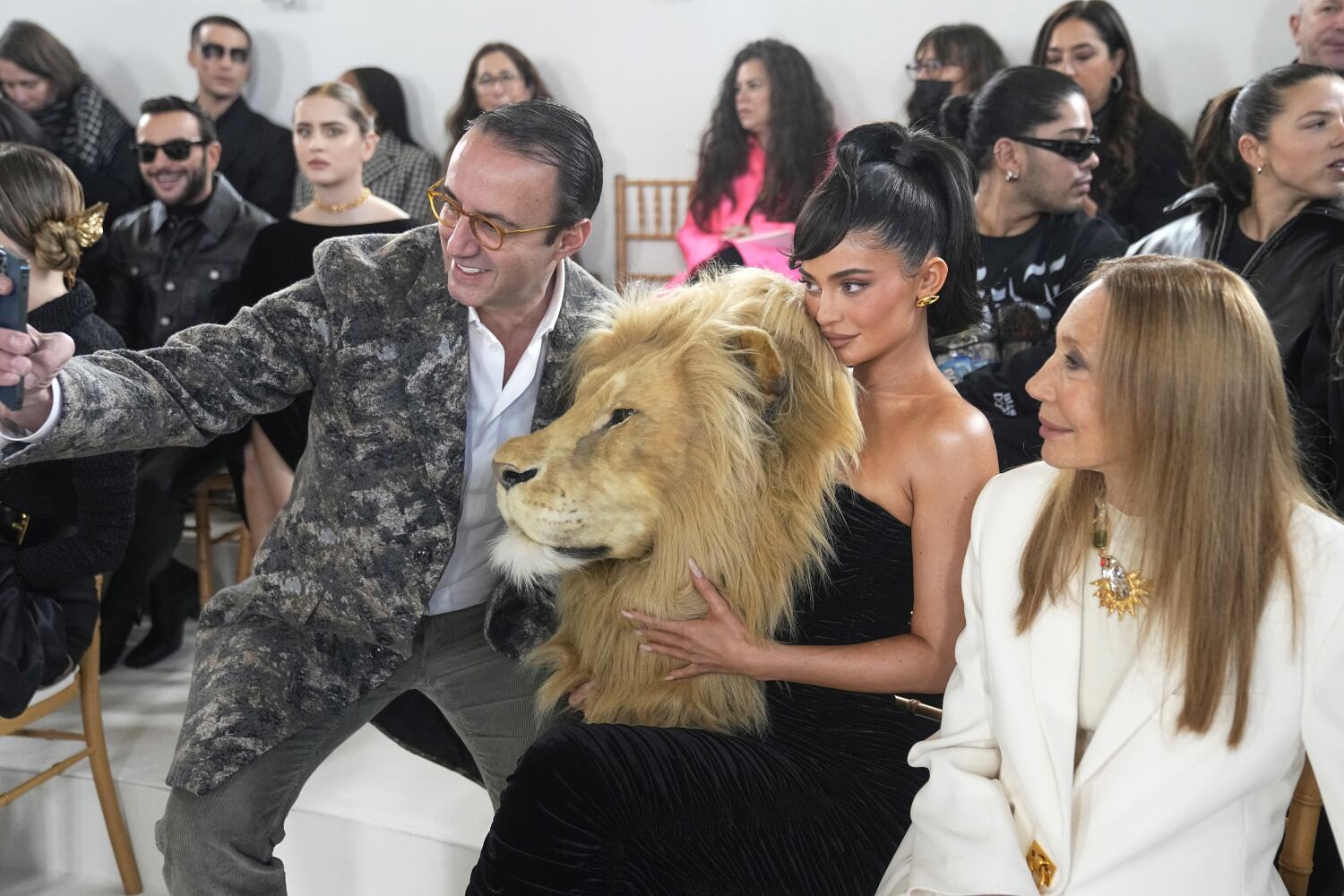 The “Kardashians” personality attended Schiaparelli’s Spring/Summer ’23 fashion show in Paris wearing a custom dress designed by Schiaparelli’s creative director, Daniel Roseberry. But unlike regular black dresses, Jenner’s had a wild twist: a realistic lion’s head, mane and all, slung over the right shoulder.

“BEAUTY AND THE BEAST. Thank you @danielroseberry and @schiaparelli for such a special morning,” Jenner said on Instagram Monday. “Wow, I loved wearing this hand-built faux art creation from man-made materials. Beautiful beautiful “

The cosmetics mogul’s lion-studded ensemble was just a taster of the animalistic looks Schiaparelli promoted as part of his “Inferno Couture” line.

On Monday’s runway, Naomi Campbell showed off a furry coat with a black wolf’s head draped over her shoulder, while Shalom Harlow flaunted a leopard-print dress with a realistic leopard baring its teeth on her chest.

For these outfits, Schiaparelli wanted to make one thing clear, saying in a press release, “NO ANIMALS WERE HARMED IN MAKING THIS LOOK.”

Instead of severed animal heads with genuine fur, the eye-catching accessories were made from hand-sculpted foam, wool and silk faux fur. They were hand-painted to appear as realistic as possible, “celebrating the glory of the natural world,” Schiaparelli said in the statement.

Even PETA, which has long spoken out against the use of real fur and leather in the fashion industry, was a fan.

Ingrid Newkirk, president of the animal rights group, told TMZ Monday that Jenner’s look “celebrates the beauty of lions and can be a statement against trophy hunting, in which lion families separate to satisfy human egoism”.

He continued: “These fabulously innovative three-dimensional animal heads show that where there’s a will, there’s a way.”

“I’m sorry, but it’s a no for me. Whether it’s fake or not, it promotes animal cruelty,” one user commented on an Instagram post by Schiaparelli.

“The only thing this glorifies is the killing of these animals, even if this is false. The lion, cheetah, and wolf seem literally meant to look like they were killed and worn as clothing,” a second user wrote. “How’s this for celebrating the glory of the natural world? Make it make sense.

According to Schiaparelli, the realistic animal heads were a nod to Dante’s “Inferno,” in which each beast represented a different vice.

“Hell, Purgatorio, Paradiso: one cannot exist without the others,” Schiaparelli said in an Instagram video showing off her fashion show. “It is a reminder that there is no heaven without hell; there is no joy without sadness; there is no ecstasy of creation without the torture of doubt.”

Everything Coming to Luna+ and Prime Gaming in February 2023 — GeekTyrant

Here’s a quick rundown from Xbox and Bethesda Developer_Direct, including a surprise HI-FI-RUSH release — GeekTyrant