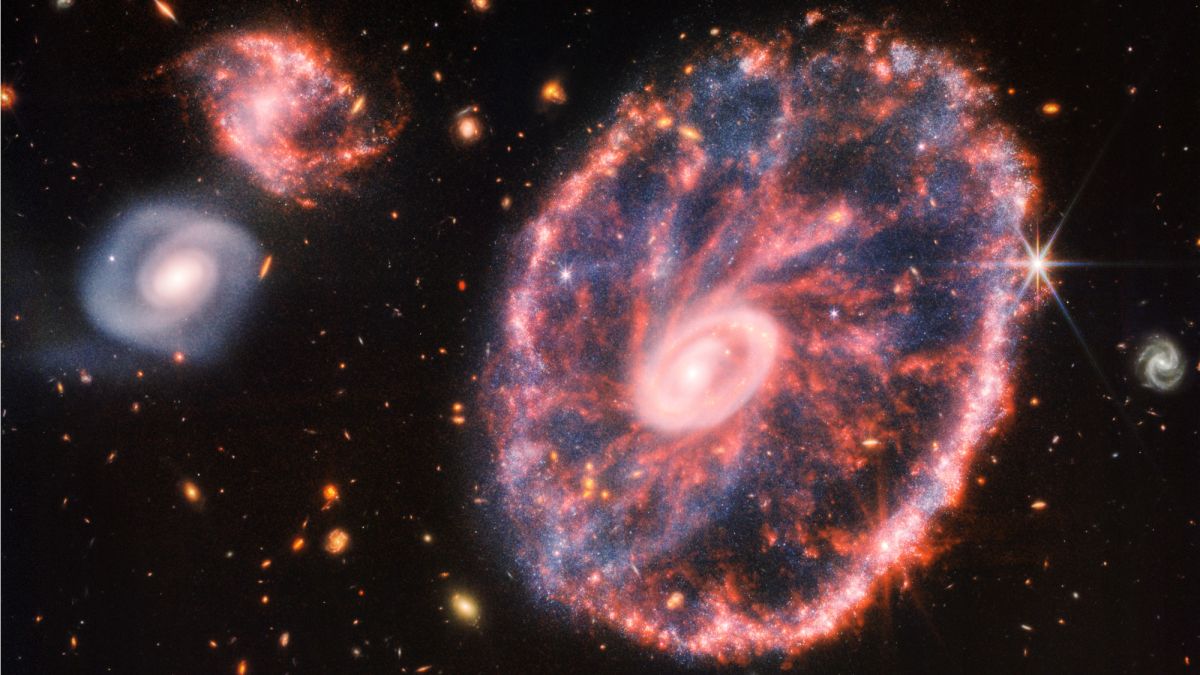 The James Webb Space Telescope peered through dust and gas to reveal star formation in a rare wheel-shaped galaxy that formed in a long-ago galactic crash.

The galaxy, called the Cartwheel for its striking resemblance to a wheel of an old fashioned carriage, was previously studied by the Hubble Space Telescope, but Webb’s infrared gaze has revealed a plethora of previously unseen details in the galaxy‘s structure.

Infrared light, which is essentially heat, penetrates through dust clouds, allowing the James Webb Space Telescope to peer into regions of space that are obscured to optical telescopes, such as Hubble. In the new images, Webb instruments NIRCam and MIRI, revealed individual stars within the star-forming regions in the outer ring of the Cartwheel galaxy, as well as clusters of very young stars around the galaxy’s central supermassive black hole, which is also shrouded in dust.

The Cartwheel, located about 500 million light-years away from Earth in the constellation Sculptor in the southern sky, is a rather rare type of galaxy that astronomers call a ring galaxy. Scientists believe that long ago, the Cartwheel was a common spiral galaxy, similar to our Milky Way. Then, about 700 to 800 million light-years ago, it collided with a smaller galaxy.

The crash altered its shape and structure to what astronomers can see today, forming two ring-like structures, one surrounding the galactic center and another framing the entire galaxy. The two rings expand outward from the galaxy’s center like “ripples in a pond,” the Space Telescope Science Institute (STScI), which operates Webb and is based in Maryland, said in a statement (opens in new tab).

As the outer ring expands, it pushes outward the dust and gas that surrounds the galaxy and triggers star formation, according to STScI. The areas where new stars are being born appear as small blue dots in the image and are scattered throughout the galaxy, but especially concentrated in the outer ring.

The Webb observations also reveal areas rich in hydrocarbons and silicate dust, which form the spokes connecting the inner and outer ring. Earlier Hubble images could also distinguish the spokes, but the new Webb observations make these features much clearer, STScI said.

The Cartwheel galaxy is still transforming as a result of the past crash, and the new observations will help provide insights into its past and future evolution.