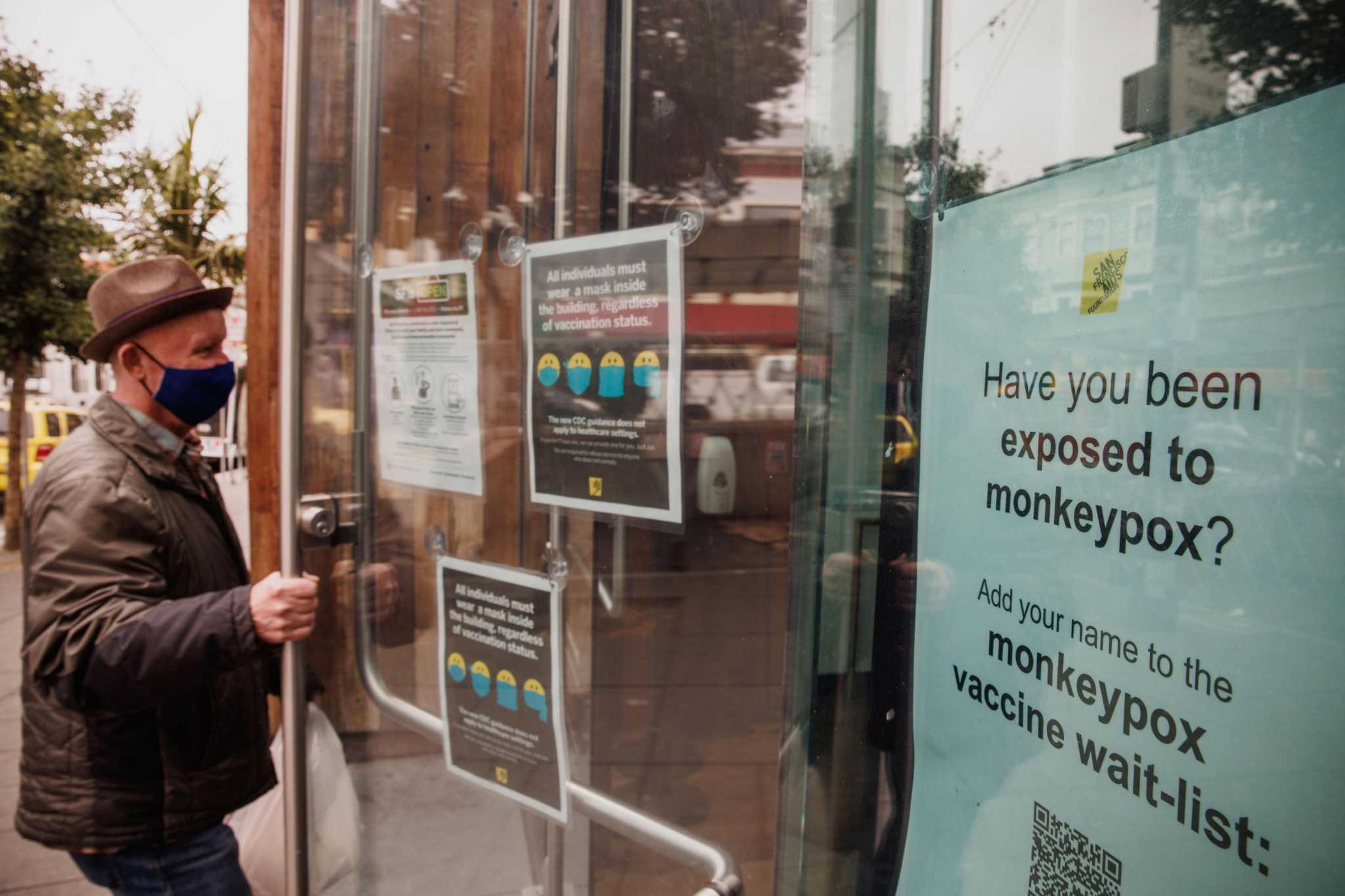 As the city of San Francisco declared a state of emergency Thursday in response to rising cases of monkeypox, members of San Francisco’s LGBTQ community expressed frustration and anger over the government’s response.

Referring to the population most affected by the outbreak so far, Health Officer Susan Philip on Thursday said officials wanted “to affirm our commitment to the health of our LGBTQ communities in San Francisco, as we have historically always done as a city.”

But among LGBTQ residents, lines with hours-long waits for the vaccine and a shortage of education about best practices to avoid transmission have been common complaints, as well as a shortage of the vaccine itself. A lack of centralized information about vaccination appointments has also been a concern.

“Information is trickling down in a lot of different ways, and it’s not getting to the people that really need it the most quick enough,” said drag performer and LGBTQ activist Juanita More.

Monkeypox in the Bay Area

A well-known organizer in the city’s queer scene, More was able to get an appointment for a first vaccine dose through her physician. But she said she worries that because of the lack of information, others in the nightlife community, as well as sex workers “who are in contact with people all the time,” are not being prioritized.

Anyone can get monkeypox, but during the current outbreak it has been spreading largely through male-to-male sex.

Outside of Strut, the Castro district wellness center run by the San Francisco AIDS Foundation, 68-year-old Tom Lappin said he had hoped he would receive the vaccine Thursday afternoon — after his doctor encouraged him to do so because he has cancer — but was told the waiting list had more than 1,000 people on it.

“I’m feeling apprehensive,” Lappin said, adding that the dearth of clear information about the virus and the disorganized response are making him and his husband think twice about things like sharing laundry machines with their neighbors. He said many residents like him are hearing echoes of the AIDS crisis, and questioning whether the current mindset is, “It’s just affecting gay people, and we don’t care, so we’re not shipping vaccines?”

In a report Wednesday, San Francisco officials said that 261 people had confirmed or probable monkeypox infections, with more than 30% of cases affecting Latinos across the city. Health officials also said that they anticipate cases will continue to grow in the coming weeks.

Honey Mahogany, chair of the San Francisco Democratic Party and candidate for District Six supervisor, was blunt in her assessment of the official response:

“I feel like our government across the board has really failed us in this response to this outbreak,” she said, prior to the announcement of the state of emergency.

“We should have learned our lessons from the HIV and AIDS crisis: that just because it affects one community doesn’t mean it can’t quickly spread to affecting everybody else,” said Mahogany.

“Additionally, I don’t think that we’ve learned our lesson from COVID-19,” she said. “We have just been through this, many of these systems haven’t even been completely dismantled yet. Why couldn’t we have used these systems to get people to (the) monkeypox vaccine?”

After San Francisco’s announcement, she said it should be followed with action on the federal level: “It’s about time! We need a local, but also a national emergency to be called so we can effectively nip this in the bud. We know how to do this, and we have the tools at hand.”

Tyler TerMeer, executive director of the San Francisco AIDS Foundation, said Thursday that while he applauded the decision to declare monkeypox a public health emergency, the foundation — and San Francisco’s queer community — had been ringing the alarm about the rapid spread of monkeypox since May, and vaccine access is still severely lacking.

More than 7,300 individuals are waiting for a vaccine at the foundation’s sexual health clinics in San Francisco, he said, and added that there is no end to that demand in sight.

The emergency declaration “could have happened sooner, but at the end of the day I believe this is the appropriate moment,” said TerMeer. “Anything beyond this would have been too late.”

“The state of emergency gives us the opportunity as people who are working with more marginalized communities to have a very specific and grounded conversation about monkeypox,” he said. “So I think it’s a good thing.”

Jupiter Peraza, director of social justice initiatives for the Transgender District, also saw the declaration as a positive development: “We are definitely very pleased to hear that the city of San Francisco has officially declared a public emergency for monkeypox,” she said. “We think that that was a step that the city needed to take mostly because of their large and prominent LGBT population that the city possesses.”

The city’s announcement came just a few days before the “Up Your Alley” leather and fetish event on Sunday, also known as Dore Alley because of its South of Market neighborhood location. On Monday, the Tubesteak Connection party that was planned for Thursday evening announced its postponement due to concerns over lack of vaccine availability.

Organizers of Saturday’s Sneaks party at Club Six advised guests on their e-vite page to “Take care of yourself, think about what level of risk you are comfortable with, keep an eye out for symptoms and should you unfortunately suspect exposure or infection, take care not to spread it to others.” Although they are not canceling the event, they also noted “We accept refunds — please stay home if you are not well and we will see you next time.”

Bob Goldfarb, the executive director of the Leather & LGBTQ Cultural District in the South of Market area, said the organization was using its social media accounts to put out information about the virus ahead of the Dore Alley events this weekend.

“I think that there is a lot of confusion about methods of transmission and the actual impact of an infection itself,” said Goldfarb. “The Department of Health recommends if you’re going into a crowd that you be fully clothed and covered to avoid skin to skin contact, which is apparently the primary method of contracting the disease.”

While Goldfarb noted that there will be gatherings and dance parties this weekend “where it is atypical to be fully clothed,” he has spoken to people who are taking various degrees of caution.

“Some people are avoiding events and some people … are just diving in as carefree as ever. (But we) are very happy to see people who are taking precautions to minimize that skin-to-skin contact and the risk of transmission.”

Diamond Heights resident Todd Janzen, 60, said he was still planning to go to the main street fair for “Up Your Alley” on Sunday, but added that his risk calculation felt different as a married man no longer “on the meat market.”

Still, the chaos surrounding the outbreak brought back memories of the AIDS crisis, which he lived through as a San Francisco resident in the 1980s, he said.

“I lost a lot of very close friends,” Janzen said. “To me that was a far more scary time. We didn’t know. We had no idea. People were dropping like flies.”

The fact that monkeypox is rarely fatal has come as a grounding comfort to many other queer San Franciscans who acutely remember the AIDS crisis and the city’s response.

Lower Haight resident Jack Davis, 71, said he and his friends are wondering if it’ll be the third pandemic they’ll live through — while they’re still coping with PTSD from the past two.

“This is not our first rodeo,” said Davis, adding he’s now asking his friends if he can hug them, out of concern for how the virus is spreading. “Everyone I talk to is aware of it and concerned about it. Some people are changing their sexual behavior and some people are not.”

In response to the emergency declaration, podcast host and adult film performer Kristofer Weston said that he is glad that the increase in cases is now being addressed.

“I’m noticing lots of gay men are quickly trying to find out where they can get the vaccine or at least get the first dose,” said Weston. “I’m also noticing a few dropping out of events this weekend, out of caution.”

While he has seen some confusion over the vaccination rollout and transmission of the virus, he also believes that the LGBTQ community has been good at getting the message out as quickly as possible. Weston has had one vaccination as said that although he will still attend Dore Alley, he is changing his plans somewhat.

Just after Thursday’s announcement, the atmosphere along Castro Street seemed as jovial as any other day.

LGBTQ activist and AIDS Memorial Quilt founder Cleve Jones said that while he is disappointed by the federal response to the virus, he believes San Francisco “has done a relatively good job.”

Of concern to Jones, however, are both what he sees as the unserious nomenclature associated with the term “monkeypox” and ongoing labeling of the virus as a “gay disease.”

“That gives power to those who would like to ignore it or mock it as it only happens to other people,” said Jones.

“We’re already seeing an abundance of this coming from the right wing,” he added. “It just seems like every time we have a public health crisis there are certain elements who want nothing more to do than mock the people that are afflicted to minimize the urgency.”