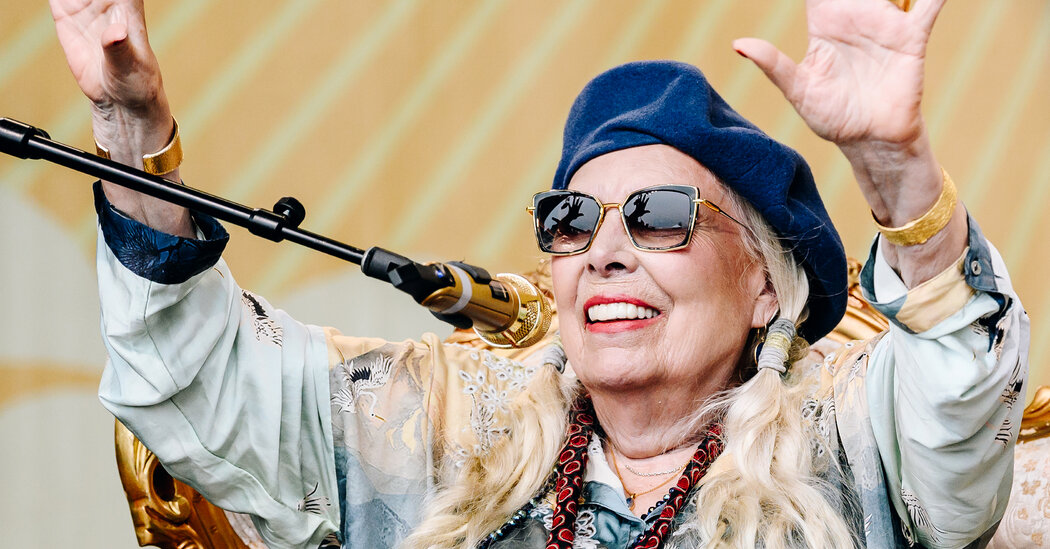 The highlight of the set, though, was “Both Sides, Now,” a song that a 23-year-old Mitchell wrote in 1967, the same year she played Newport for the first time. Back then, some critics scoffed at the lyrics’ presumptive wisdom: What could a 23-year-old girl possibly know about both sides of life? But over the years, the song has revealed itself to contain fathomless depths that have only been audible in later interpretations.

When she was 56, Mitchell rereleased a lush version of “Both Sides, Now” on her 2000 album of the same name, backed by a 70-piece orchestra. Her voice was deeper, elegiac and elegantly weary. “It’s life’s illusions I recall,” she sang at the end of the song, “I really don’t know life at all.”

That version was considered a tear-jerker (and used to this effect in a classic scene from the movie “Love, Actually”), but then again, it’s easy to find pathos in getting older. Aging inherently brings suffering, debilitation and loss — this is not news. What Mitchell’s 2022 performance of the song asserted was that it can also bring serendipity, long-delayed gratification and joy. Ever an expert re-interpreter of her own material, Mitchell breathed new meaning into some of her most famous lyrics. “I could drink a case of you, and I would still be on my feet,” she sang with Carlile, the line becoming not only a challenge to a lover, but a survivor’s boast to life itself.

Part of what is so heartening about Mitchell’s recent pop cultural revival, like Bush’s surprise chart resurgence, is that it allows a beloved if somewhat underappreciated artist to receive her laurels while she’s still living. (Wynonna Judd, still grieving her mother Naomi’s death, was also onstage with Mitchell and wept openly throughout “Both Sides, Now” — a visual reminder of a crueler fate and the inherent dichotomy of the song.) In a culture that excessively scrutinizes women as they age, or simply renders them invisible and erases their influence, it felt like a quietly radical act to honor Mitchell in this way. Younger artists got the chance to pay earnest homage to their elder; a mature woman who was not yet finished reinterpreting her life’s work reclaimed the stage.

Surrounded by an adoring crowd of friends, fellow musicians, and admirers — many of whom were not yet born when Mitchell wrote “Both Sides, Now” — she seemed to sing it this time with a grinning shrug: I really don’t know life at all. As if to say: You never know — anything can happen. Even this.