Monkeypox Has Been A “Wake-Up Call”, Says WHO Chief Scientist 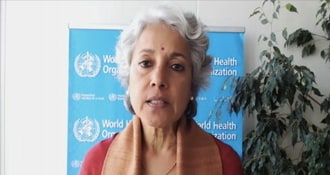 The outbreak of Monkeypox has been a “wake-up call”, Chief Scientist at the World Health Organisation, Soumya Swaminathan has said. In an exclusive interview to NDTV, she explained that since 1979-1980, smallpox vaccination programmes have been stopped, indicating that it might have helped the virus to steal a march on the world.

“This Monkeypox outbreak has been a wake-up call for us, because we need to prepare ourselves for deadly outbreaks all the time,” she said.

Monkeypox is caused by monkeypox virus, a member of the Orthopoxvirus genus. Its clinical presentation resembles that of smallpox, a related orthopoxvirus infection which was declared eradicated worldwide in 1980.

The World Health Organisation website says the vaccines used during the smallpox eradication programme also provides protection against monkeypox. But newer vaccines have been developed, of which one has been approved for prevention of monkeypox.

Dr Swaminathan, however, indicated that using the smallpox vaccine for monkeypox may be useful though more laboratory data is required.

“The vaccine we have today for smallpox, the second and third generation vaccines, but there are very limited doses. Countries have been stockpiling these vaccines in case there is a smallpox outbreak, biological or accidental,” she said.

One company — Denmark-based Bavarian Nordic — has developed a vaccine for Monkeypox, but there isn’t any efficacy data. “There is an urgent need to collect data,” she said.

Dr. Swaminathan also said that Indian pharma companies including the Serum Institute of India could have a role in bottling, marketing and distributing the existing smallpox vaccine if it were widely available.

“We have been talking about a pandemic preparedness and one of the things is how quickly we can scale up manufacturing. India will play a very important role just because of the capacity we have. So yes, Bavarian Nordic has 16 million doses, which is part of the US stockpile. The US has donated some of those doses to some other countries… so something we need to explore is if we can get the fill and finish done for example at SII (Pune-based Serum Institute of India), but if we also can transfer technology and start the manufacturing in other sites,” she said.

Asked if Monkeypox can be worse than the new mutant virus of Covid, Dr Swaminathan said there can be no straight comparison.

Despite the lack of data, it is clear that Monkeypox is a different virus and will not mutate at the same speed as Covid, she said.

“We need to do the same thing – sequencing and all. We need global sharing of data,” she said. “At the moment, we should prevent it from becoming a pandemic. We have caught it early,” she added.

So far, four cases of Monkeypox have surfaced in India — three from Kerala and one from Delhi.

The World Health Organisation, which declared Monkeypox a global health emergency over the weekend, said yesterday that more than 16,000 confirmed cases have been recorded in 75 countries so far.