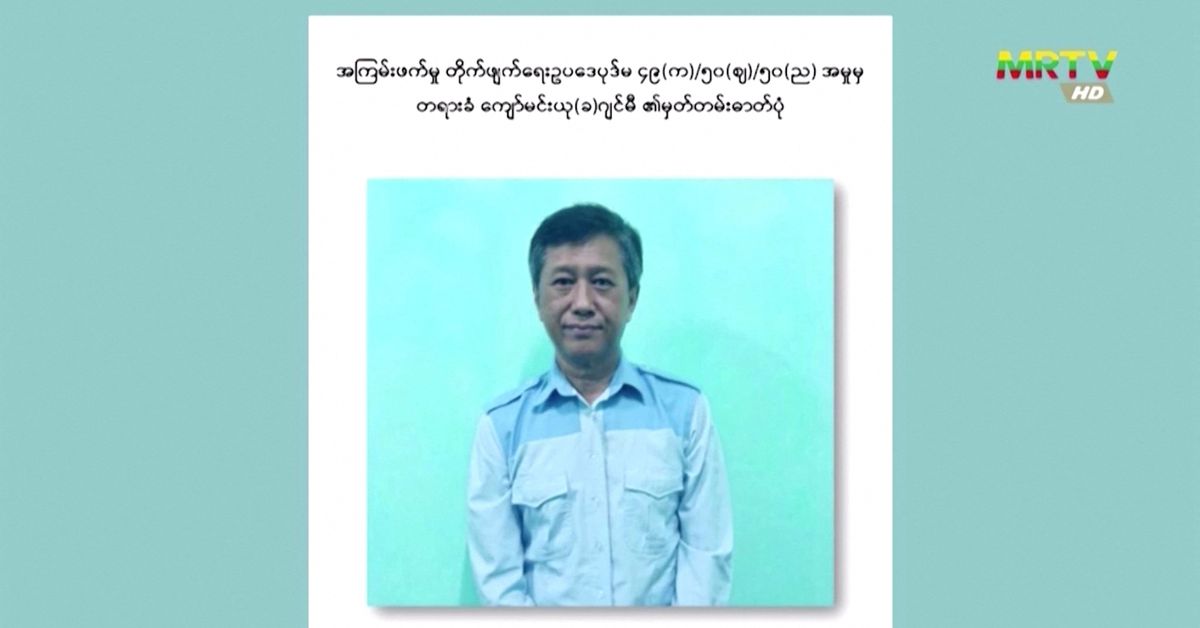 Sentenced to death in closed-door trials in January and April, the four men had been accused of helping insurgents to fight the army that seized power in a coup last year and unleashed a bloody crackdown on its opponents.

Myanmar’s National Unity Government (NUG), a shadow administration outlawed by the ruling junta, condemned the executions and called for international action against the ruling military.

“Extremely saddened … condemn the junta’s cruelty,” Kyaw Zaw, the spokesman of the NUG president’s office, told Reuters in a message. “The global community must punish their cruelty.”

“The four men were convicted by a military court in highly secretive and deeply unfair trials. The international community must act immediately as more than 100 people are believed to be on death row after being convicted in similar proceedings.”

Thazin Nyunt Aung, the wife of Phyo Zeyar Thaw, said she had not been told of her husband’s execution. Other relatives could not immediately be reached for comment.

The men had been held in the colonial-era Insein prison and a person with knowledge of the events said their families visited it last Friday. Only one relative was allowed to speak to the detainees via an online platform, the source added.

State media reported the executions on Monday and junta spokesman Zaw Min Tun later confirmed the sentences to the Voice of Myanmar. Neither gave details of the timing.

Previous executions in Myanmar have been by hanging.

An activist group, the Assistance Association of Political Prisoners (AAPP), said Myanmar’s last judicial executions were in the late 1980s.

Kyaw Min Yu, also known as Ko Jimmy, one of the four democracy activists executed by Myanmar’s military authorities, accused of helping carry out “terror acts,” state media, is seen in the undated screen grab taken from a handout video. MRTV/Handout via REUTERS

Last month, junta spokesman Zaw Min Tun defended the death penalty, saying it was justified and used in many countries.

Cambodian Prime Minister Hun Sen, chair of the Association of Southeast Asian Nations (ASEAN), appealed in a letter in June to junta leader Min Aung Hlaing not to carry out the executions, relaying deep concern among Myanmar’s neighbours.

“Not even the previous military regime, which ruled between 1988 and 2011, dared to carry out the death penalty against political prisoners,” said Malaysian member of parliament Charles Santiago, chair of the ASEAN Parliamentarians for Human Rights.

“This means yet another increase in the junta’s brutality, which comes from a sense of impunity largely fostered by the failure of the global community to do anything effective to prevent it from committing further atrocities.”

Japanese Foreign Minister Yoshimasa Hayashi said the executions, which go against Japan’s repeated urging for a peaceful resolution as well as its demands to free detainees, would further isolate Myanmar.

Myanmar has been in chaos since last year’s coup, with conflict spreading nationwide after the army crushed mostly peaceful protests in cities.

The AAPP says more than 2,100 people have been killed by security forces since the coup. The junta says that figure is exaggerated.

The true picture of violence has been hard to assess as clashes have spread to more remote areas where ethnic minority insurgent groups are also fighting the military.

The executions have shattered hopes of any peace agreement, said the Arakan Army (AA), a major ethnic militia in Myanmar’s restive Rakhine State.

“This act wiped out ASEAN members’ efforts toward peace and reconciliation,” the AA said in a statement, adding that the executions would only attract “braver heroes in the future, and contribute to the spring revolution”.

Last Friday, the World Court rejected Myanmar’s objections to a genocide case over its treatment of the Muslim Rohingya minority, paving the way for a full hearing. read more

The latest executions close off any chance of ending unrest in Myanmar, said analyst Richard Horsey, of the International CRISIS group.

“This is the regime demonstrating that it will do what it wants and listen to no one,” Horsey told Reuters. “It sees this as a demonstration of strength, but it may be a serious miscalculation.”