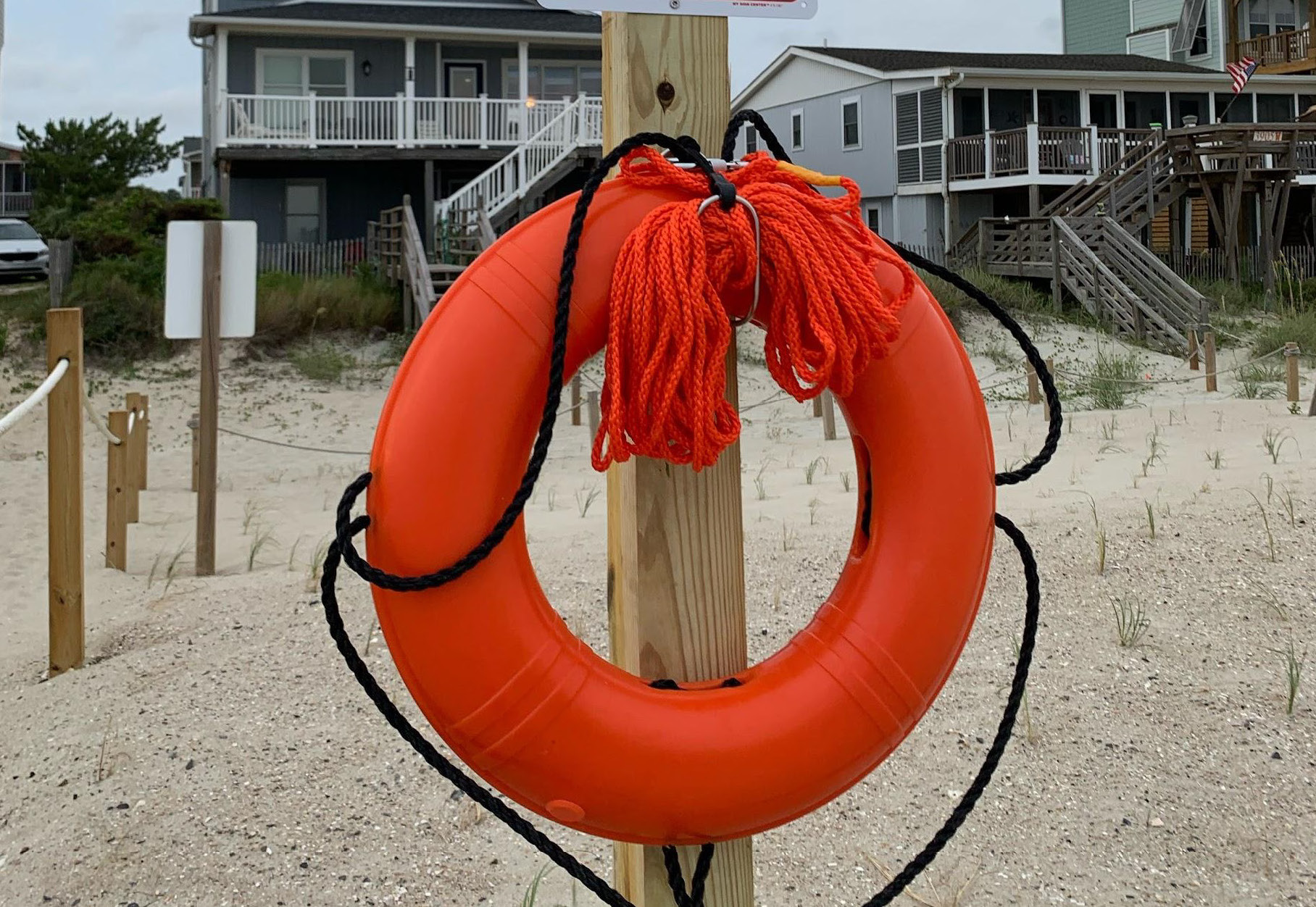 OAK ISLAND – A few weeks after the fourth tourist of the season drowned on Oak Island, members of the community are taking concrete steps to enhance beach safety.

Island spokesperson Mike Emory told Port City Daily previously that if funding were provided by local organizations to install rescue devices, the town council likely would examine its implementation. It didn’t take long for the opportunity to present itself.

READ MORE: ‘Four deaths this year is so devastating’: The cost of not having lifeguards on Oak Island

Beachgoers could see a water rescue station at all 65 public beach accesses soon, due to an initiative presented to the town by the Jack Helbig Memorial Foundation (JHMF).

JHMF already installed and funded 14 rescue can stands on Caswell Beach, and five rescue rings at the Southport waterfront in collaboration with Eagle Scout candidate Jackson Enis. Adding them to Oak Island comes as controversy over whether the town should have lifeguards continues.

Lifeguards once were posted on a section of the island called Long Beach in the early ‘90s, prior to a merge with Yaupon Beach to form Oak Island. Officials say it would be too costly to cover its 10 miles of beach with current fiscal limitations.

JHMF donated $1,800 to the signs initiative. Adding rescue cans to Oak Island’s 65 beach accesses will be a larger undertaking. Each station will be equipped with red rescue tubes, similar to those already installed at Caswell Beach, and cost approximately $250 each.

Total financing could exceed $16,000 and JHMF’s proposal includes a seed donation of $10,000 for setup costs and an annual maintenance budget of $2,000. Helbig says the community seems eager to fill in the gaps for anything JHMF or the town wouldn’t cover.

“I’ve seen so much support from the community via social media,” she said. “I’ve already had a few people want to donate and sponsor, which is amazing.”

As details continue to be ironed out, Helbig said an “adopt a stand” initiative has been discussed as a way for community members to get involved. The idea is that with a donation of $250 or more, a donor will have a plaque affixed to their sponsored post with an inscription or dedication.

The proposal by JHMF was not the only one shared with the town this week.

Bruce Ivers considers Oak Island his home beach even though he lives in St. James Plantation, a community less than 5 miles from the island. He, too, examined installing a water rescue station between 71st and 72nd streets near the St. James community’s private oceanfront beach house back in May, before the last three of this year’s drownings had taken place.

Ivers said he mentioned the idea to Oak Island Mayor Liz White on May 25, who in turn seemed receptive, aside from some questions about logistics. After the drowning on July 3, Ivers drafted an 11-page proposal with hopes of addressing the mayor’s concerns and vetting the plan further.

Last week he met with St. James Mayor Jean Toner who was supportive, Ivers said. He also sent a formal copy of the proposal to White. The town and Mayor White did not respond to a Friday request from Port City Daily for confirmation of receipt of Ivers’ proposal.

He planned “to build, install, fund and maintain the station,” in hopes it would increase its chances of being approved. Relinquishing any costs from the local municipalities, Ivers estimated an initial investment of $800, with the intention to “accept any long term costs personally.”

His proposal included renderings, a list of 15 people and organizations consulted in its development, and information about various phenomena that could warrant the use of a rescue device on the beach.

It also included a summary of the North Carolina General Statutes that limit the liability of “good samaritans.” Good samaritan laws are intended to protect those who offer aid in emergencies even if the victim is injured or dies despite rescue efforts. Still, liability is a primary concern shared by many critics of installing lifeguards and rescue stations.

Ivers hoped his thorough planning would make for a quick approval and is “disappointed that it hasn’t been received more enthusiastically by the town” at this point.

However, local resident Richard Gephart didn’t approach the town to take matters into his own hands. Beachgoers might have already noticed a new life ring rescue station installed near the NE 39th St. public access.

Gephart of Raleigh owns an oceanfront home near the access that he rents out most of the year. Earlier in the season after a drowning, Gephart saw a post on social media about beaches that have installed rescue devices in light of a national lifeguard shortage.

He said he was compelled more after a close friend drowned at Salter Path beach — which also doesn’t have lifeguards — while trying to rescue his son. Gephart said the terror of the situation hit closer to home, compounded by Oak Island’s drowning incidents and with his own family vacation approaching the week of July 4th.

“If I were sitting on the beach and my 10-year-old were out there in distress, how would I handle that, and how would my wife and I handle that?” Gephart said he asked himself. “And I was like, one of us is going into the water regardless, and if there’s a flotation device that’s highly visible nearby, the other one’s going to get the floatation device.”

So he spent $130 on the materials to build a life ring rescue station. Accessibility and visibility were priorities in the installation. The life ring stand is at the end of a private access in front of his home, about 170 feet away from the nearby public access. While his property line is technically on a dune, Gephart installed it beyond the dune directly on the public beach without prior approval.

He said photos appeared on his social media feed one day, posted by OIWR, showing Gephart’s station and another non-sanctioned rescue post at Sherill Street.

“Although a good faith effort, it is important that the devices be of the correct type and size for ocean rescue,” OIWR posted. “Likewise, it is best if they are part of an organized, town-sanctioned program. The good news is that the town has indicated they are willing to consider a proposal if funded by outside sources.”

Town spokesman Emory said the town has not formally addressed any non-sanctioned rescue stations at this time.

Gephart said he wondered if he would receive pushback.

“I was hoping I wasn’t doing anything that would be perceived as bad,” he said. “I was just doing what I could to help out.”

When passing most houses while walking on the beach, visible rip-current signs aren’t displayed for beachgoers. The signs with QR codes leading to virtual warning flags are displayed at beach accesses only.

At the beginning of July, beach patrols began traveling up and down the shoreline, flying warning flags attached to UTVs. Visitors also can download OKInformation, a text-messaging service that will notify mobile subscribers of the surf conditions.

Though Gephart said personal responsibility is incremental to drowning prevention, he also is uncertain whether it’s enough.

“There is a difference between ‘realistic’ and what’s ideal,” Gephart said. “Most people who are coming here from out of town just don’t understand the ocean.”

Want to read more from PCD? Subscribe now and then sign up for our newsletter, Wilmington Wire, and get the headlines delivered to your inbox every morning.