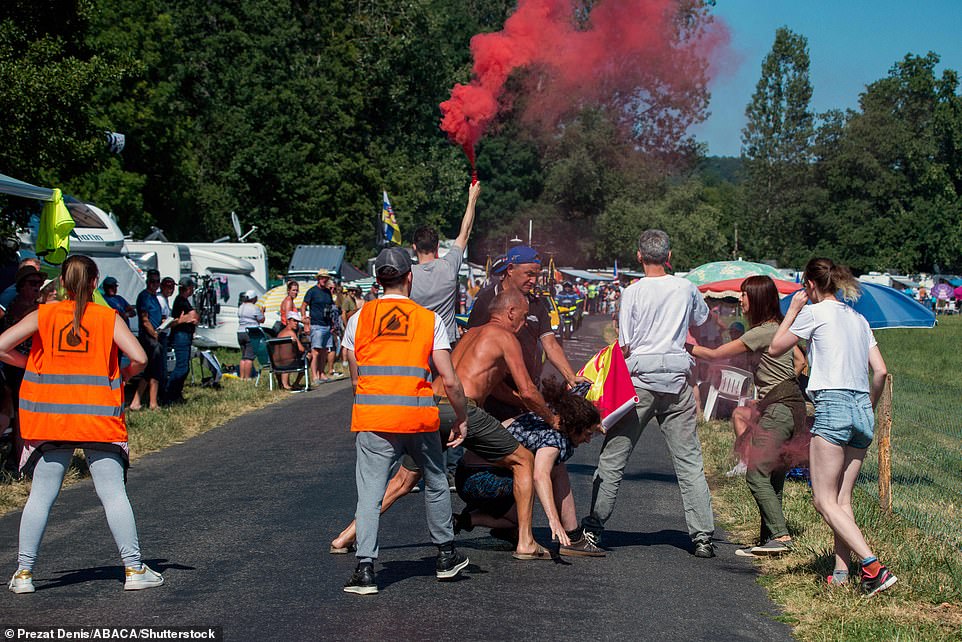 Tour de France fans took matters into their own hands yesterday as they angrily removed a gang of eco-protesters threatening to disrupt the historic bike race by sitting in the middle of the road to block oncoming riders.

Eight climate activists from French campaign group Dernière Rénovation (Last Renovation) sporting T-shirts emblazoned with the message ‘we have 978 days left’ to tackle environmental decline tried to stop the race during the 20th stage between Lacapelle-Marival and Rocamadouron on Saturday.

But their attempts to wreak havoc at the stage were thwarted by spectators, who stormed onto the road and dragged them out of the path of the oncoming bikes even before the police arrived on the scene to make arrests.

Striking pictures have emerged of the enraged fans bowling into the road to pull, push and harry the protesters off the tarmac to prevent them from ruining the race.

Started earlier this year, Dernière Rénovation (DR) is a French faction of the international climate activism conglomerate ‘A22’, which includes the likes of Just Stop Oil – a UK-based group which attempted to disrupt the British Formula 1 Grand Prix at Silverstone on July 3.

DR employ similar tactics to those used by the likes of Just Stop Oil and Insulate Britain, such as gluing themselves to the road to create congestion in large cities or putting themselves in harm’s way to disrupt major events.

The French faction had already hit the cycling competition three times prior to yesterday’s demonstration, and have promised more action – though the Tour De France draws to a close today on the Champs-Élysées in Paris.

A statement released by the group today read: ‘Citizens supporting DR tried to interrupt the Tour de France time trial, during the 20th stage between Lacapelle-Marival and Rocamadour.

‘If nothing is done, the climate crisis will devastate entire swaths of our planet, as its disastrous consequences in our country have already witnessed this summer, and will condemn billions of people to death.’

Hero Tour de France fans have taken justice into the own hands to remove eco-protesters threatening to disrupt the event by blocking the road. Pictured: People push the protesters away from the path of the oncoming Tour de France, between Lacapelle Marival and Rocamadour, in Gramat 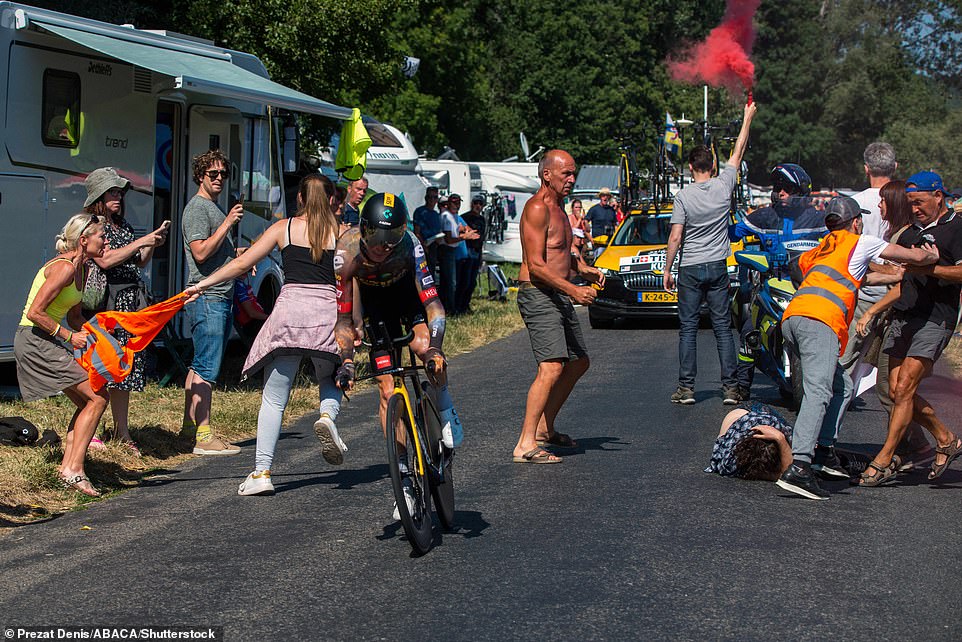 Eight climate activists from Dernière Rénovation (Last Renovation) wearing T-shirts saying ‘we have 978 days left’ to tackle the environment tried to stop the race during the 20th stage between Lacapelle-Marival and Rocamadour. Pictured: Tour de France fans pushing the protesters away on Saturday as they tried to block the race 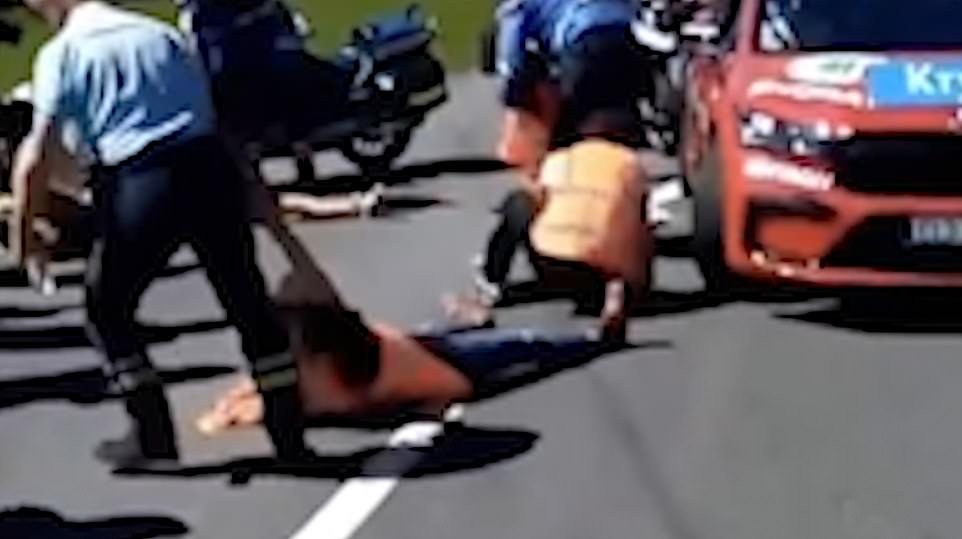 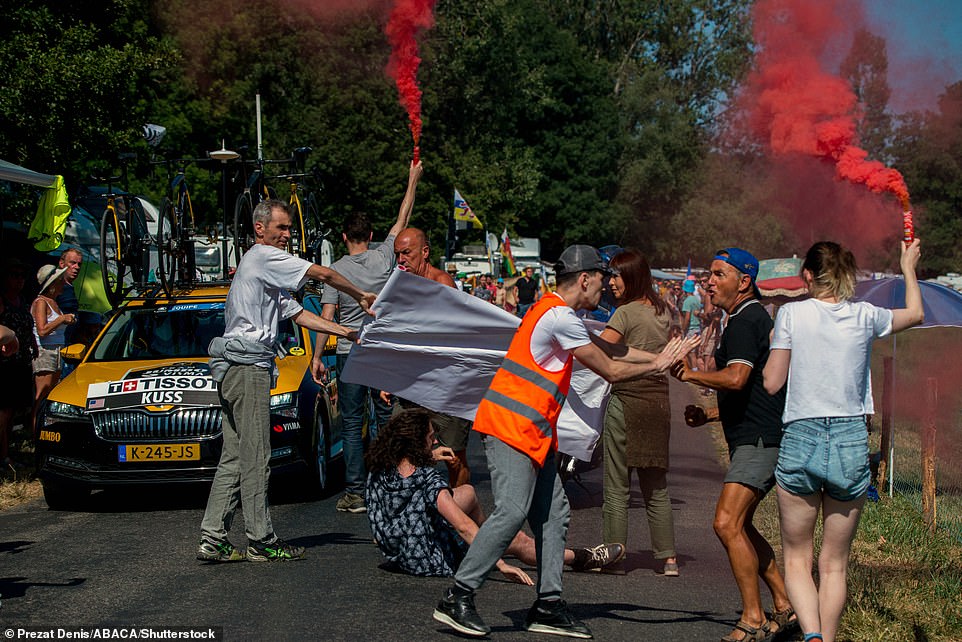 Environmental collective ‘Last Renovation’ activists demonstrated on the road, and block the Tour de France, between Lacapelle Marival and Rocamadour, in Gramat, France, on Friday, July 23 before spectators dragged them away 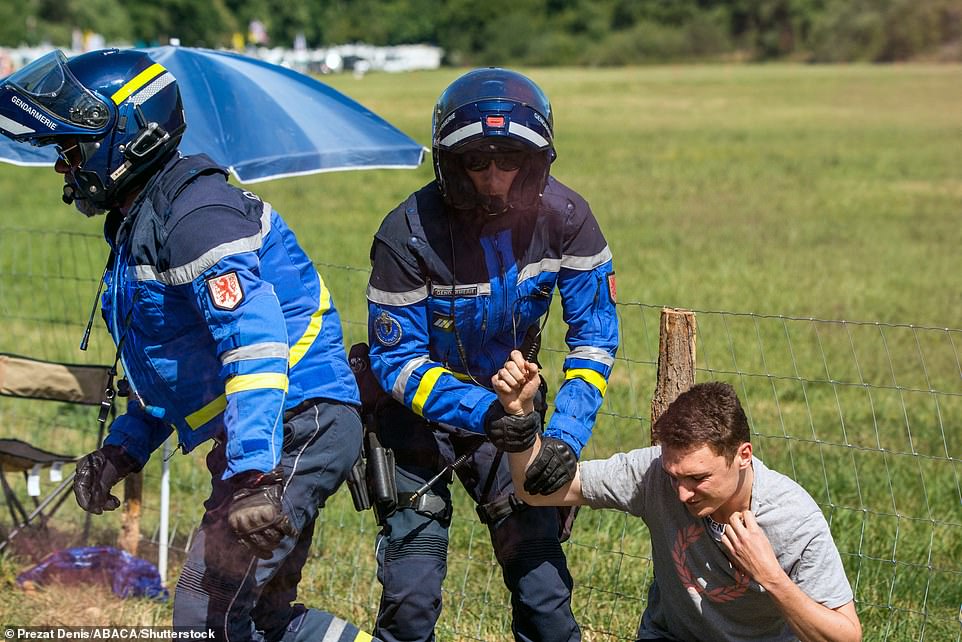 Activists who demonstrated on the road, and blocked the Tour de France are pictured being handcuffed by police on Saturday 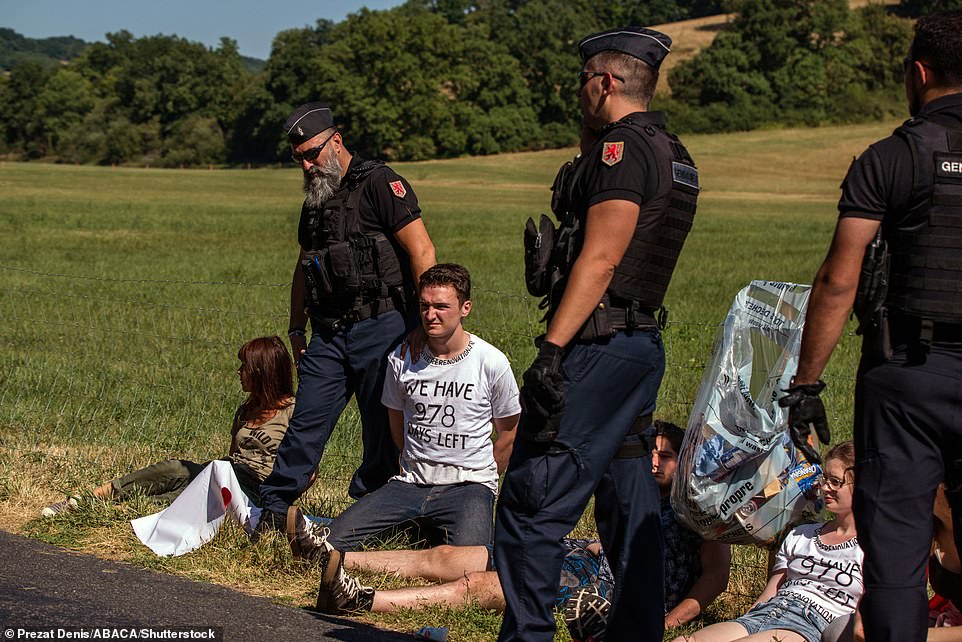 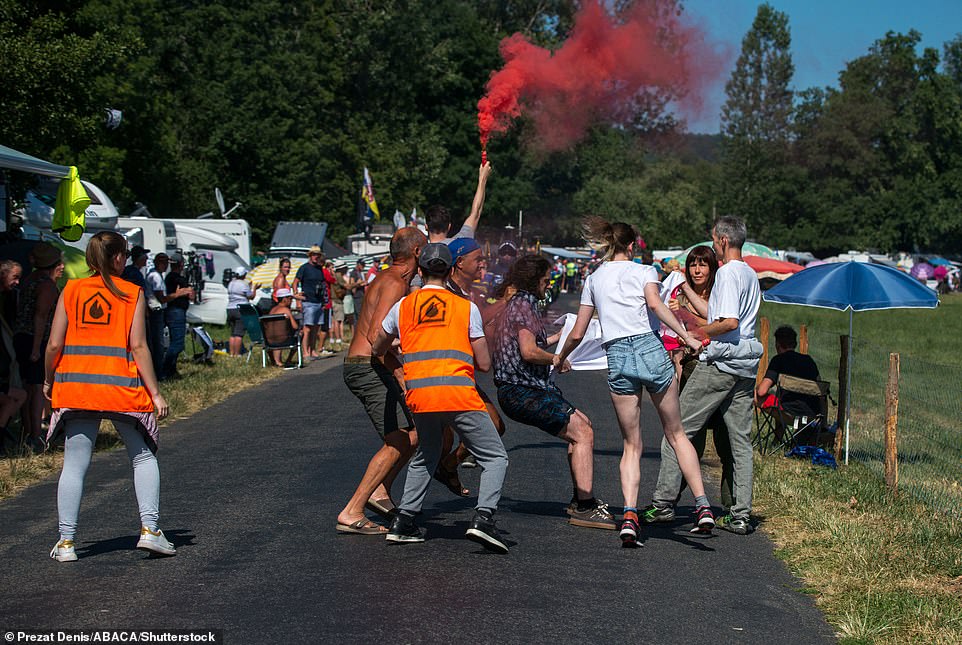 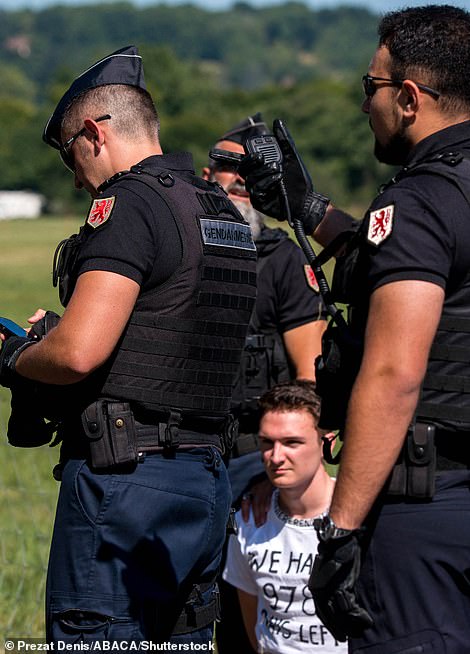 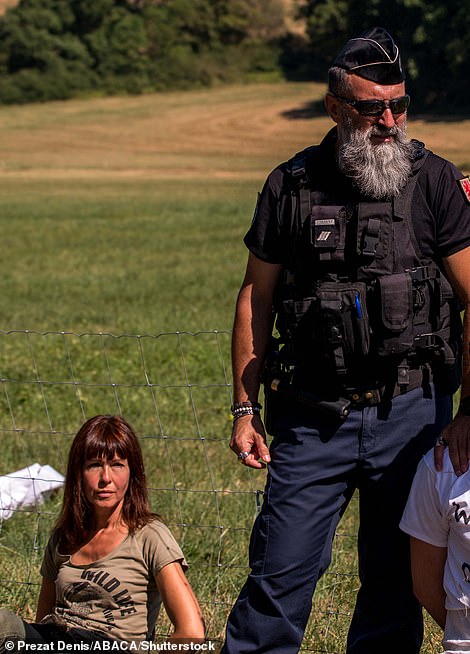 Their tactics and demands echo Insulate Britain, who want to see a government commitment to insulate buildings, and Just Stop Oil. Pictured: On Saturday 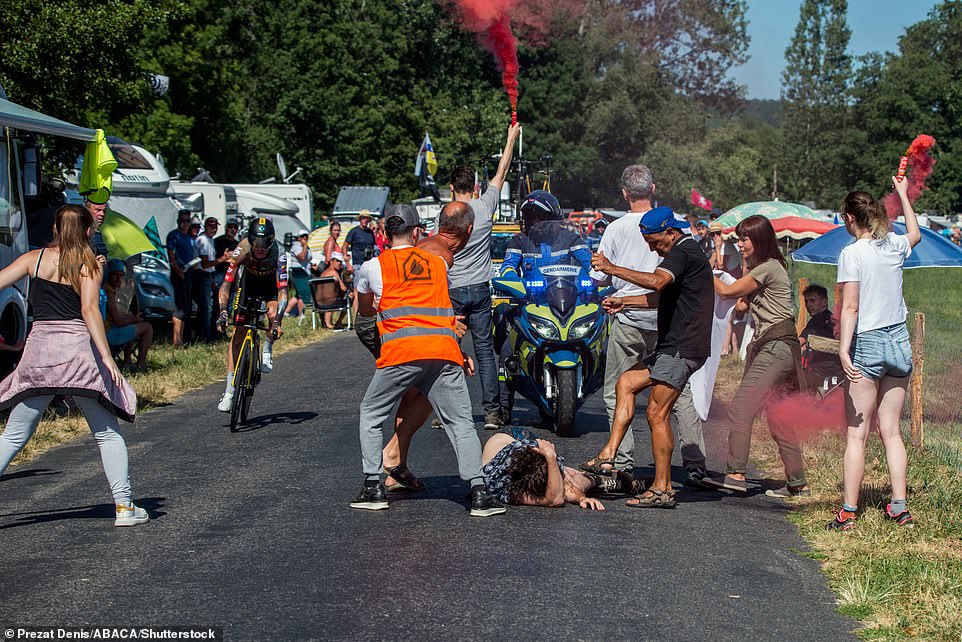 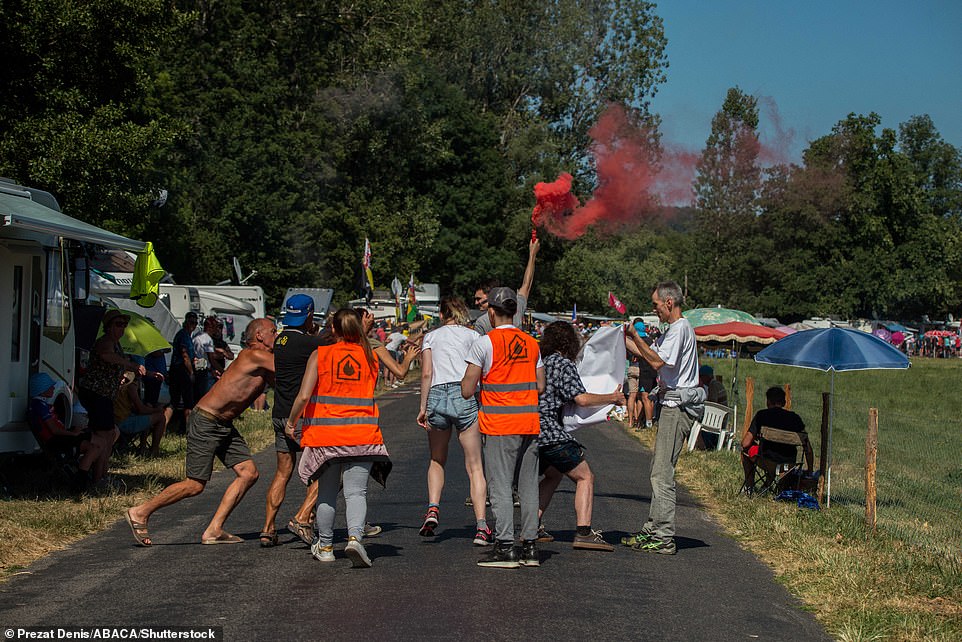 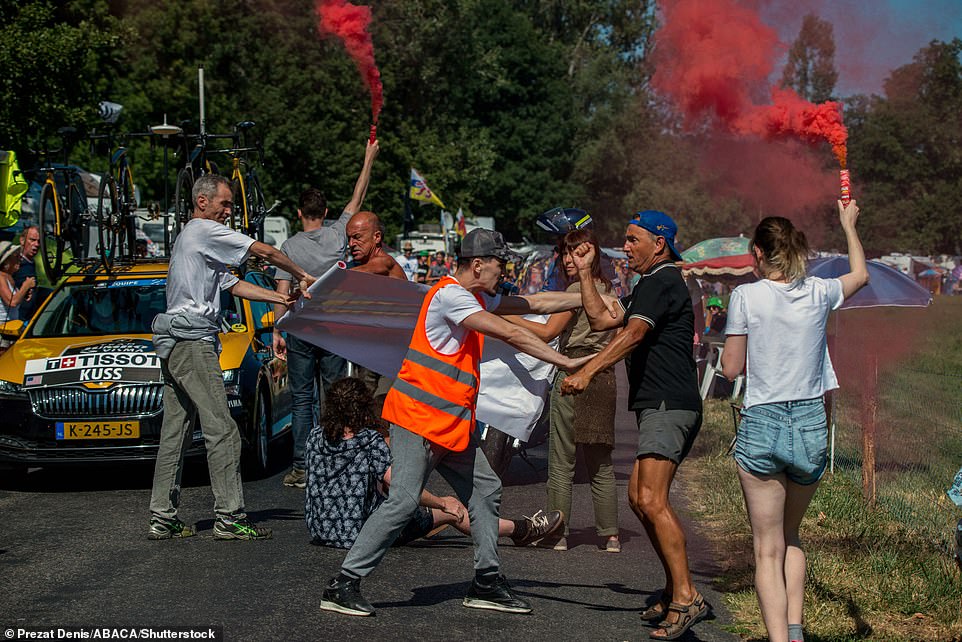 In a separate press release the group said: ‘We will start again as many times as necessary to make our government react.

‘Not a day should go by without the climate emergency being at the heart of the political agenda.’

Cédric, a 49-year-old engineer and DR member who was involved in the attempted protest said on Saturday: ‘I know a lot of people won’t understand this action. I’m on this road because I’m terrified of the world my children and the people I love will come to know.

‘I do my best to do what seems right and necessary to me. To prevent millions of people from living in a world of immense suffering, wars and famines.

‘I am determined to do everything in my power, rather than remain in denial and inaction where our government takes refuge. I can’t be 100 per cent sure what I’m doing is the best solution, but I know it’ll always be better than not trying.’ 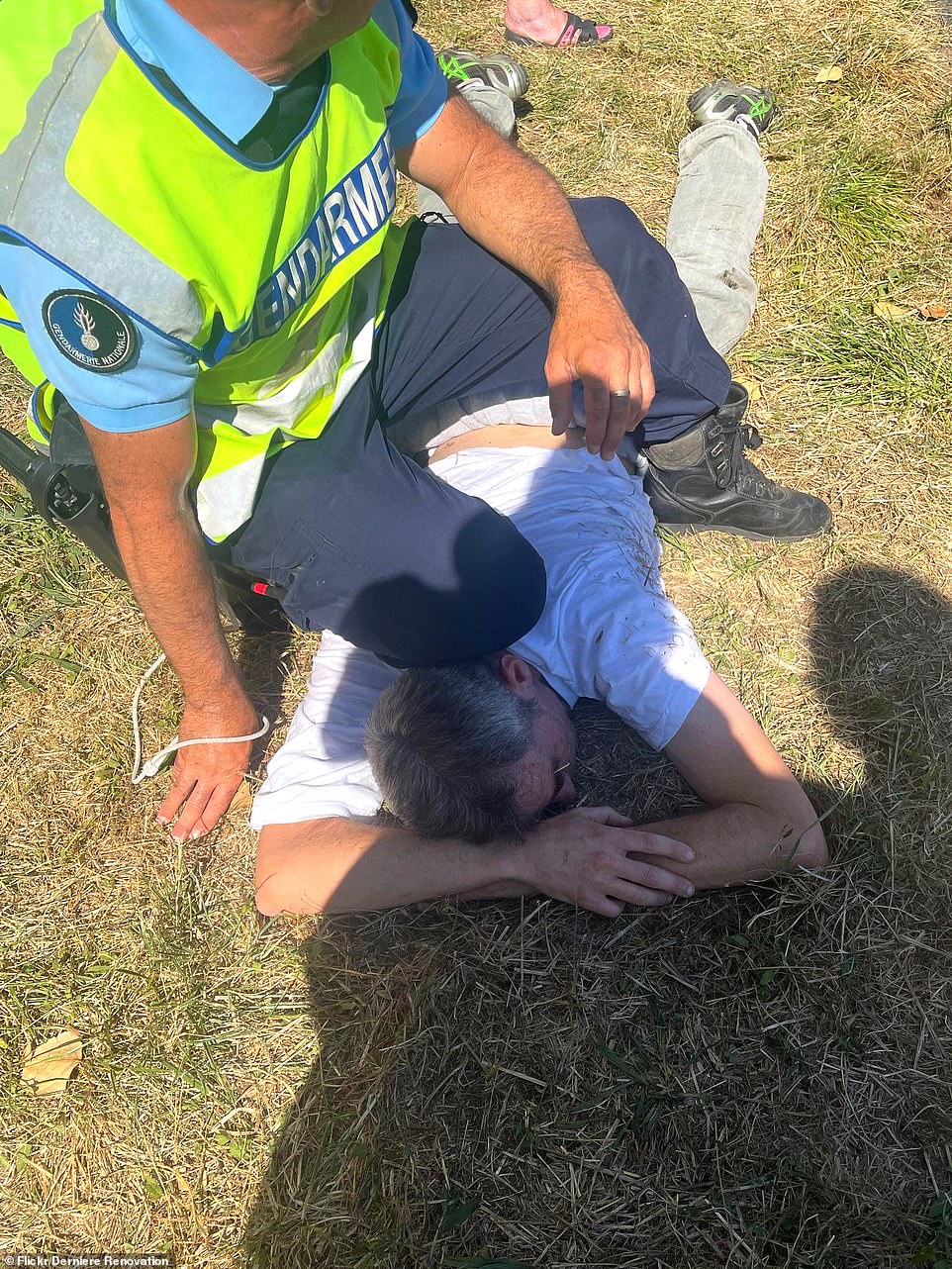 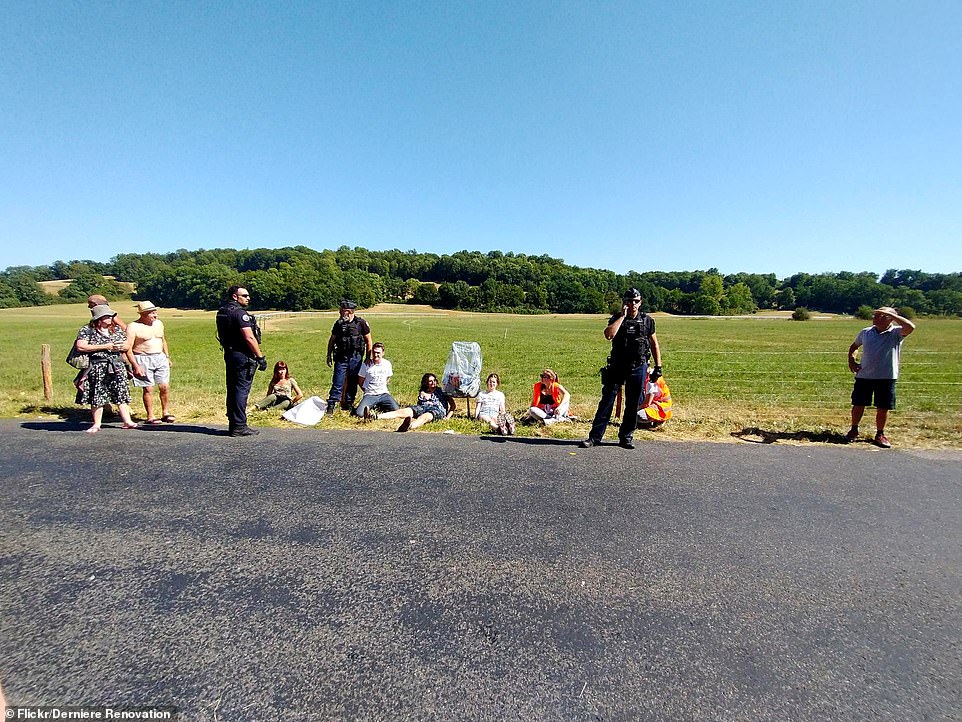 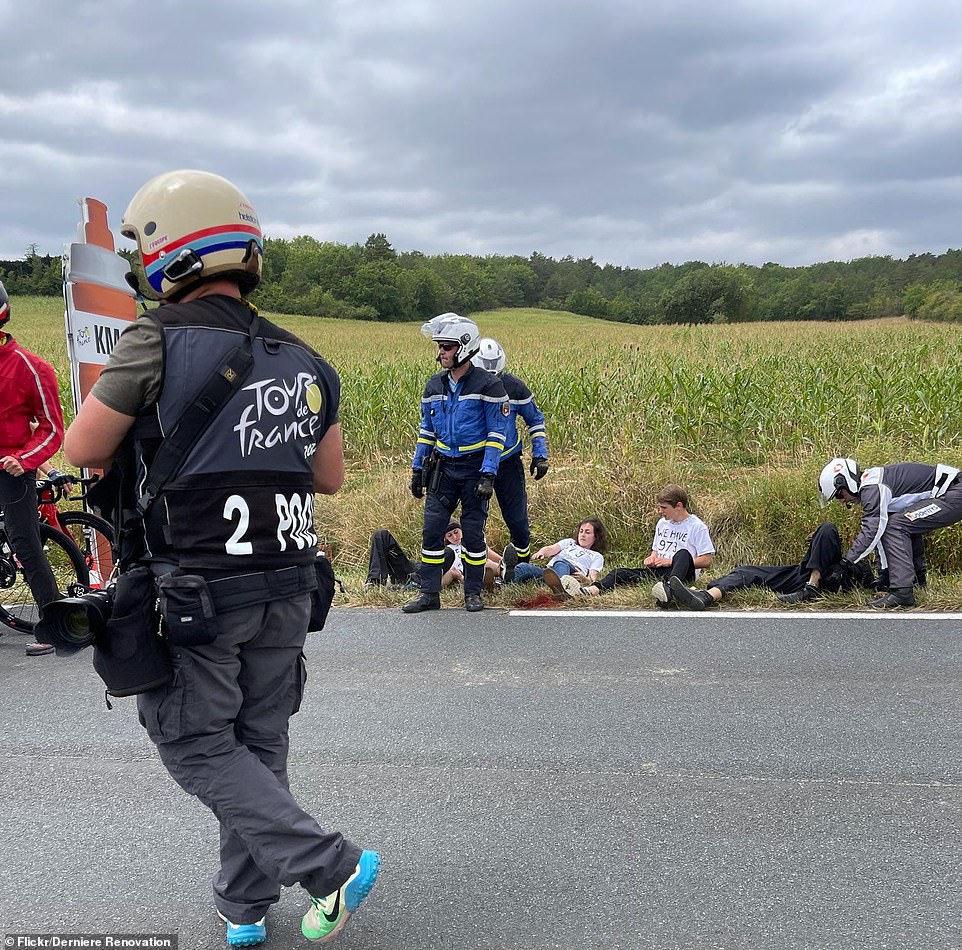 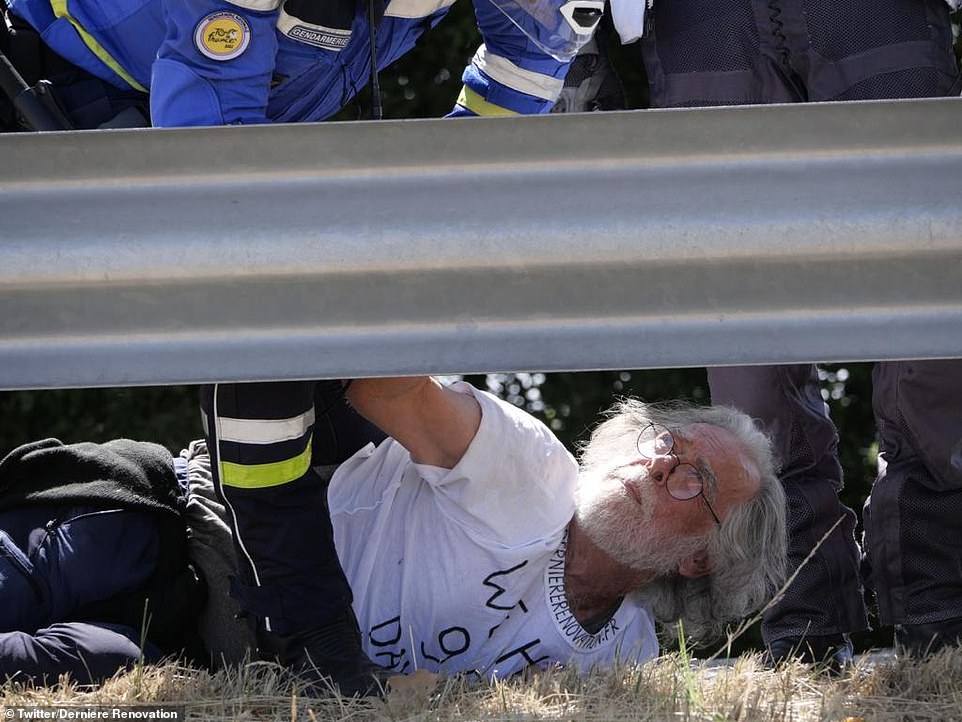 During a protest on Friday, six protesters – four men and two women – were arrested by French police for another disruption attempt and are set to be hauled into court in November to face trial.

‘At the end of their police custody, the six people were summoned to appear on November 22, 2022 before the Auch criminal court to be tried on the count of obstructing the circulation of vehicles’, Jacques-Edouard Andrault said in a statement.

They are likely to face a two-year prison sentence and a fine of 4,500 euros, local media reported.

Other DR members let off a smoke bomb about 95 miles from the stage’s finish line, between the villages of Boucagnères and Auterive, while five activists glued and chained themselves to the road.

Philippe Gilbert, a rider competing in his final Tour de France, said on Friday: ‘It’s a bit disappointing because there are other ways to protest. I hope they will be punished in proportion to their stupidity.’ 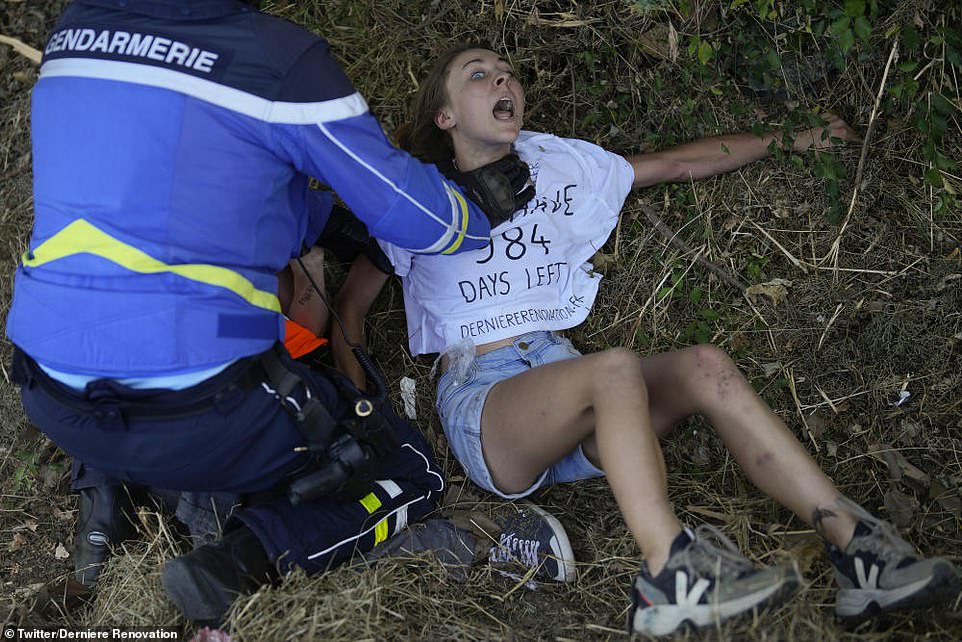 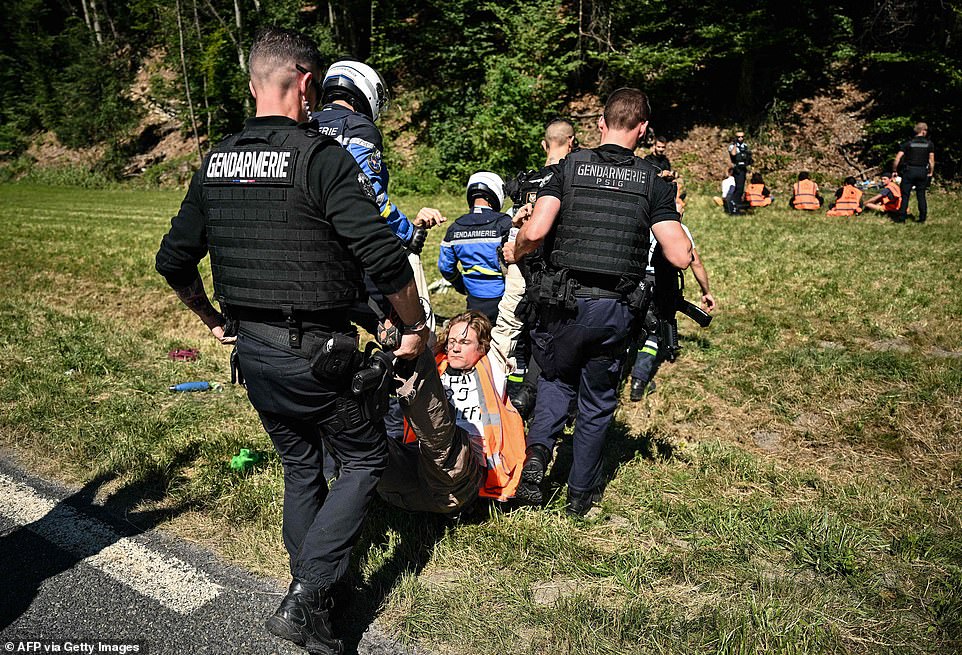 The activists were pulled off the road by police onto the nearby grass, helped by a Tour official earlier this month on July 12 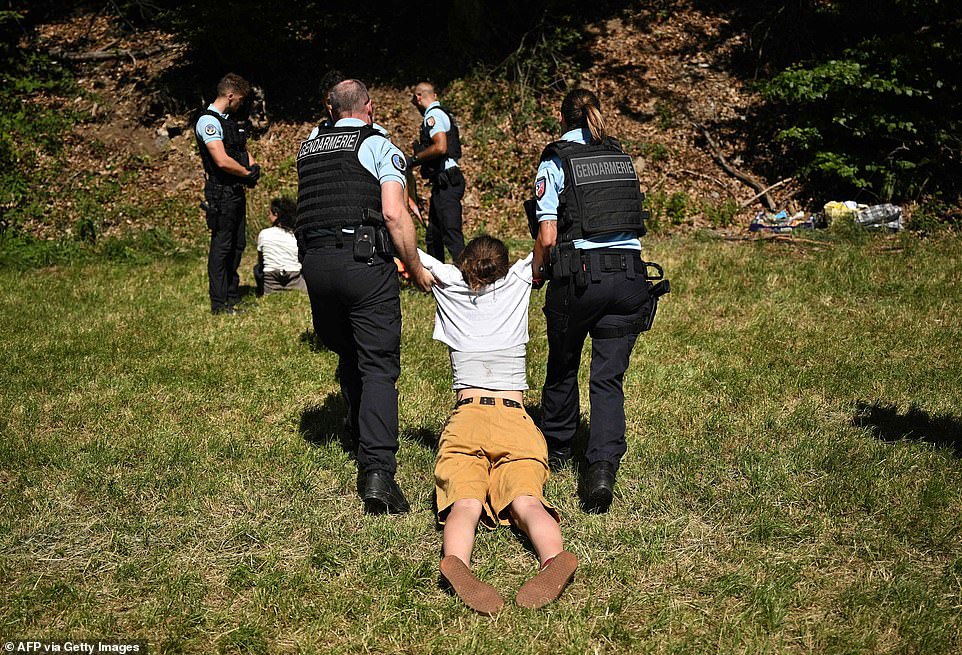 Two of the activists were sitting back-to-back tied together, while others let off smokebombs on July 12 during the Tour De France 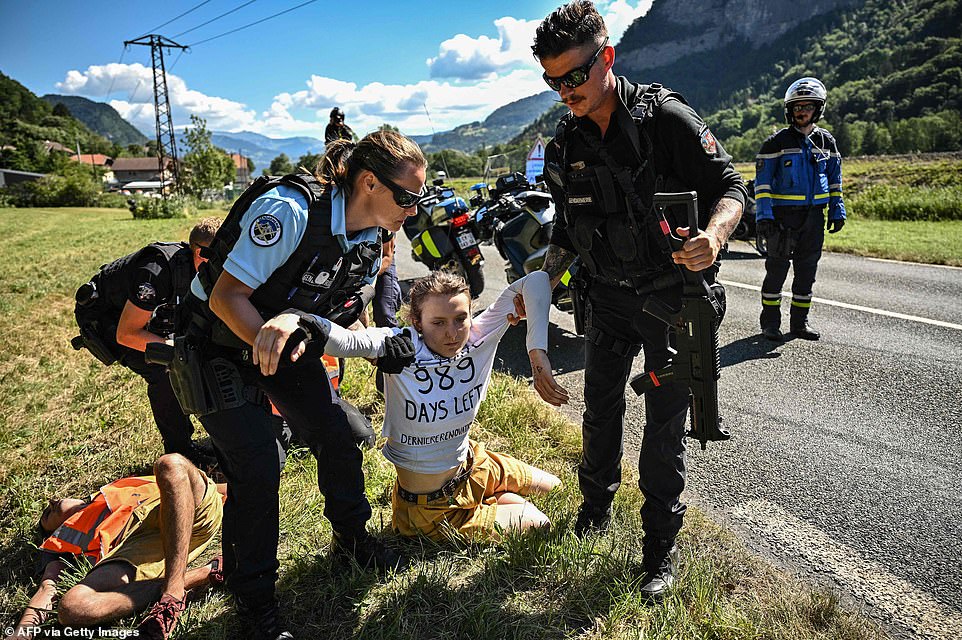 DR spokesperson Sasha Cantet said: ‘In the absence of a bill on the energy renovation of buildings, which is all the more necessary in the context of the war in Ukraine, we will continue to disrupt the normal functioning of the country, its infrastructure and sports competitions.’

The 10th stage of the Tour de France was also halted for 10 minutes earlier this month after half a dozen climate activists tried to block riders before being hurled out of the road by police and a senior Tour official.

The activists sat on the road some 22 miles from the finish in Megeve on July 12.

DR also targeted the French Open on June 3 with demonstrations. A young woman ran onto the men’s semifinals and tied her neck to the net while wearing a T-shirt saying: ‘We have 1,028 days left’.