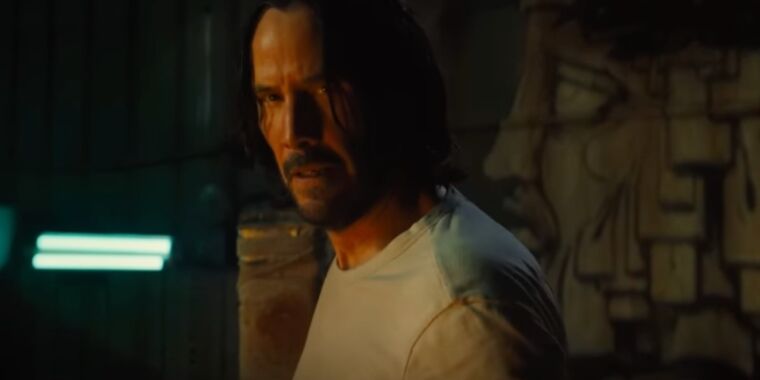 The movie won’t hit theaters until March 2023, but that didn’t stop Keanu Reeves from swinging by Comic-Con to introduce a sneak peek teaser for John Wick Chapter 4, simply titled John Wick (which might be confusing given that this is also the title of the original film that launched the whole franchise). According to Deadline Hollywood, Reeves crashed the Collider’s Directors on Directing panel, which included John Wick: Chapter 4 director Chad Stahelski as a panelist.

(Spoilers for the first three films in the franchise below.)

As I’ve written previously, for the benefit of those who missed the first three movies, John Wick (Reeves) is a legendary hitman (known as the Boogeyman or “Baba Yaga”) who tried to retire when he fell in love and got married. Unfortunately, he’s drawn back into the dark underground world by an act of senseless violence after his wife’s death. Nothing will stop John Wick from seeking retribution. The first John Wick grossed more than $88 million worldwide for a film that cost around $30 million to make, and it was praised for its brisk pace, heart-stopping action sequences, and stylish noir feel.

So naturally, there was a sequel. In John Wick: Chapter Two, Wick takes on a whole slew of Russian baddies but finds himself honor-bound (per the professional hitman’s code) to go on one last assignment. Of course he succeeds—he’s John Wick—but the client, Italian crime lord Santino D’Antonio (Riccardo Scamarcio), tries to cover his tracks by posting a bounty on Wick’s head. Wick ends up killing Santino—newly named to the High Table—inside the Continental Hotel in New York, which is supposed to be a safe space for assassins, and is declared “excommunicato,” cutting him off from all the resources the hitman underground usually provides.

And that’s where John Wick: Chapter 3—Parabellum picked up, with Wick scrambling to find allies (and ammo) to fight off pretty much the entire underworld of assassins, all of them very eager to claim the $14 million bounty on his head. The title refers to the old adage, Si vis pacem, para bellum: “If you want peace, prepare for war.” Wick essentially declared war on the High Table, and the escalation played out exactly as you’d expect when everyone’s favorite dog-loving hitman is involved.

Parabellum ended with one final twist that neatly set up John  Wick: Chapter 4. John negotiated a deal with the elder for the forgiveness of his many transgressions against the High Table in exchange for killing Winston (Ian McShane), manager of the NYC Continental Hotel where Wick killed Santino. That’s because Winston had refused the order to abdicate his position as punishment for aiding John. But when the time came, John refused to complete the mission.

So the High Table sent its army of assassins, Winston provided the firepower and John killed pretty much all of them. In the ensuing parley with the Adjuticator, Winston declared fealty to the High Table and shot John, who tumbled off the rooftop to the ground. He survived and was rescued by the minions of the badly wounded Bowery King (Laurence Fishburne), and the two vowed to cooperate to exact their revenge.

The big question is whether Winston’s betrayal was a calculated move. Did he actually mean to kill John? Stahelski told Digital Spy in 2020 that this was open to interpretation, but either way, we’re definitely going to see some fallout from Winston’s choice in Chapter 4. Stahleski made one thing very clear in a profanity-laced interview with IndieWire: after ruthlessly killing over 300 people (so far), John might survive, but he won’t be riding off into the sunset with a new love interest. “At the end of it, there’s no happy ending,” he said. “He’s got nowhere to go.”

The four principles are returning for this installment: Reeves, McShane, Fishburne, and Lance Reddick as Charon, the urbane concierge of the NYC Continental. Among the new characters is Akira, played by Japanese singer-songwriter Rina Sawayama in her feature film debut. She was cast after Stahelski saw her combining dance and martial arts in a couple of her music videos, so we can definitely expect some fight choreography playing to her strengths. The cast also includes top Hong Kong action star Donnie Yen, Hiroyuki Sanada, Shamier Anderson, Bill Skarsgård, Clancy Brown, and Scott Adkins in undisclosed roles.

Chapter 4 will take place in Japan, America, Paris, Berlin, and Jordan. There’s not many specifics of the plot in the Comic-Con teaser, but do we need any? Franchise fans know what they want, and they trust Stahleski to deliver. The teaser delivers. We see images of John punching a roped pole, already bloodied from constant use, in between a smorgasbord of action shots: there are samurai swords, nunchucks, bows and arrows, “dog fu,” daggers, and of course, guns, guns, guns. “Have you given any thought to where this ends?” a man asks John. “The Table will never stop. You know this. No one, not even you, can kill everyone.”

But John Wick never stops either. Yes, there will be a Chapter 5; the studio meant to film it simultaneously with Chapter 4, but between the pandemic and Reeves’ scheduling conflict due to filming The Matrix Resurrections, it decided to just focus on the fourth installment. Reeves has said he will continue making John Wick movies as long as they keep making money. Parabellum raked in $362 million worldwide. If the next two chapters do as well (or better), the franchise is gonna be with us for a long time.

In fact, there’s already a spinoff film, Ballerina, in development, with Ana de Arnas playing a young woman raised to be an assassin vowing revenge on the assassins who killed her family. A key scene in Parabellum depicted a training school for young girls, similar to the one where John Wick was raised, involving intense ballet training. The spinoff film will focus on the adult version of one of those girls.  There is also a limited TV series being developed, The Continental, focused on a young Winston in the 1970s, played by Colin Woodell.