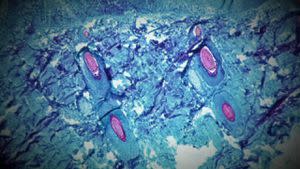 There are now more than 150 cases of the monkeypox virus in Georgia, according to the Centers for Disease Control and Prevention.

Infectious disease doctors say gay men continue to be impacted the most by this virus; however, Channel 2′s Audrey Washington talked to metro health officials about why this is not just a gay man’s disease.

Doctors told Washington that the vaccine is available in metro Atlanta, but it is still relatively limited.

Most clinics in the metro area are specifically set up to vaccinate men who have sex with other men. According to the CDC, that group is at the highest risk.

He is the director of THRIVE SS, an Atlanta-based organization that provides support to Black, gay and bisexual men living with HIV.

“They’re unfortunately living with a virus,” Walker said. “I know a couple of people who have it currently.”

Walker said he’s alarmed by the sheer number of people in the gay community who are testing positive for monkeypox.

“It’s very scary to see the pictures and hear from people suffering with it,” Walker said.

The CDC just confirmed that there are now nearly 160 cases of the monkeypox virus in Georgia and more than 2,500 cases nationwide.

He said although we are seeing higher cases within the gay community, monkeypox is not just exclusive to men who have sex with other men.

“I think it’s really important not to color this as a gay disease or homosexual disease. Anybody can get it,” Colasanti said.

Walker agrees, saying it’s important not to attach a stigma onto people who contract the virus.

“It’s a skin-to-skin disease. There’s no such thing as gay skin or straight skin. But I feel like it’s irresponsible. It heaps a bunch of unnecessary stigma onto same-gender-loving people,” Walker said.

Now his focus is on ways to prevent the spread. Both Walker and Colasanti say it begins with taking the proper precautions.

Colasanti says it’s important for people to “have their radar up if partners have rashes.”

“We all have a responsibility as it relates to preventing the spread of this disease,” Walker said.

The U.S. Department of Health and Human Services is providing thousands of additional vaccines to Georgia.

Anyone at risk is urged to get vaccinated.