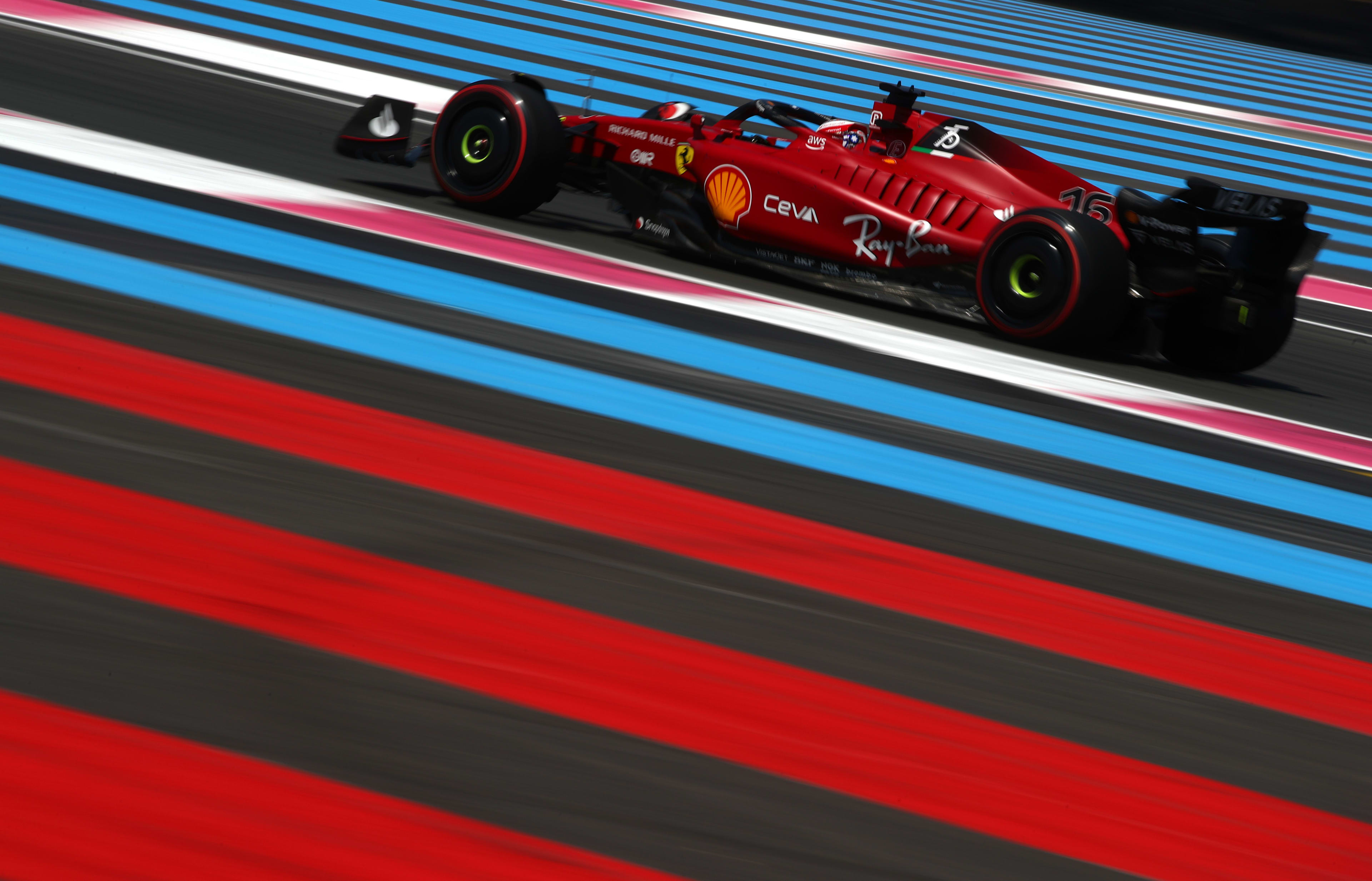 Charles Leclerc’s French Grand Prix weekend got off to a strong start as he beat championship rival Max Verstappen to the fastest time in opening practice at Circuit Paul Ricard.

The Ferrari driver clocked a 1m 33.930s on the soft tyre to finish just 0.091s ahead of the Red Bull, however Verstappen lost around two tenths of a second running wide at Turn 11 on his best lap.

Carlos Sainz was more than 0.3s off the pace in third, the Spaniard facing a tricky weekend ahead after Ferrari fitted a new control electronics to his F1-75 that triggers a 10-place grid penalty.

All three tyre compounds were on show in the opening 60-minute session of the weekend, as teams evaluated how the Pirelli rubber coped with the heatwave cruising across Europe right now. Track temperatures hit 58 degrees Celsius.

Mercedes, who have brought updates to France, were inside a second of the fastest time, courtesy of George Russell, with the team’s reserve Nyck de Vries borrowing Lewis Hamilton’s car for FP1 and ending up ninth, half a second further back.

This was the first time in Hamilton’s career – which hits 300 Grand Prix weekends in France – that he has given up his car for an FP1 session. The rules mandate each driver must do so at least once this season and the seven-time world champion, who watched the action from the Mercedes garage alongside boss Toto Wolff, chose this weekend to step aside.

AS IT HAPPENED: Follow all the action from first practice for the French Grand Prix

AlphaTauri’s Pierre Gasly and Yuki Tsunoda have been crying out for upgrades, having last received new parts back at race four in Imola, and they have been rewarded at Paul Ricard.

The early signs are positive, with Pierre Gasly just a second off the pace in fifth in his home race – however Tsunoda was down in 18th, more than two seconds off the ultimate pace.

Sergio Perez had a little spin down at Turn 4 before continuing, the Mexican sixth, ahead of the leading McLaren of Lando Norris, whose team have brought more new parts than any other for this weekend.

The Briton wasn’t running them in FP1, though, as McLaren did some back-to-back testing with Daniel Ricciardo – who ended up 10th – getting the chance to give them a try.

Alex Albon was a fine eighth for Williams, more than 1.5s ahead of team mate Nicholas Latifi, who was running the new upgrade package for the first time but ended up 20th overall.

Zhou Guanyu was the leading Alfa Romeo in 11th, ahead of Aston Martin’s Lance Stroll and home favourite Esteban Ocon in the Alpine, with Sebastian Vettel – who took a 100-year-old Aston Martin for a spin around Circuit Paul Ricard on Thursday – 14th.

Double world champion Fernando Alonso was 15th, ahead of the Haas duo of Mick Schumacher and Kevin Magnussen, who are still awaiting their first updates of the season, with Robert Kubica – borrowing Valtteri Bottas’s car for FP1 – 19th.

Who’s going to score in the 2022 French Grand Prix? Pick your dream team before qualifying and take on the world to win huge prizes with the Official Formula 1 Fantasy game. Sign up, join leagues and manage your squad here.