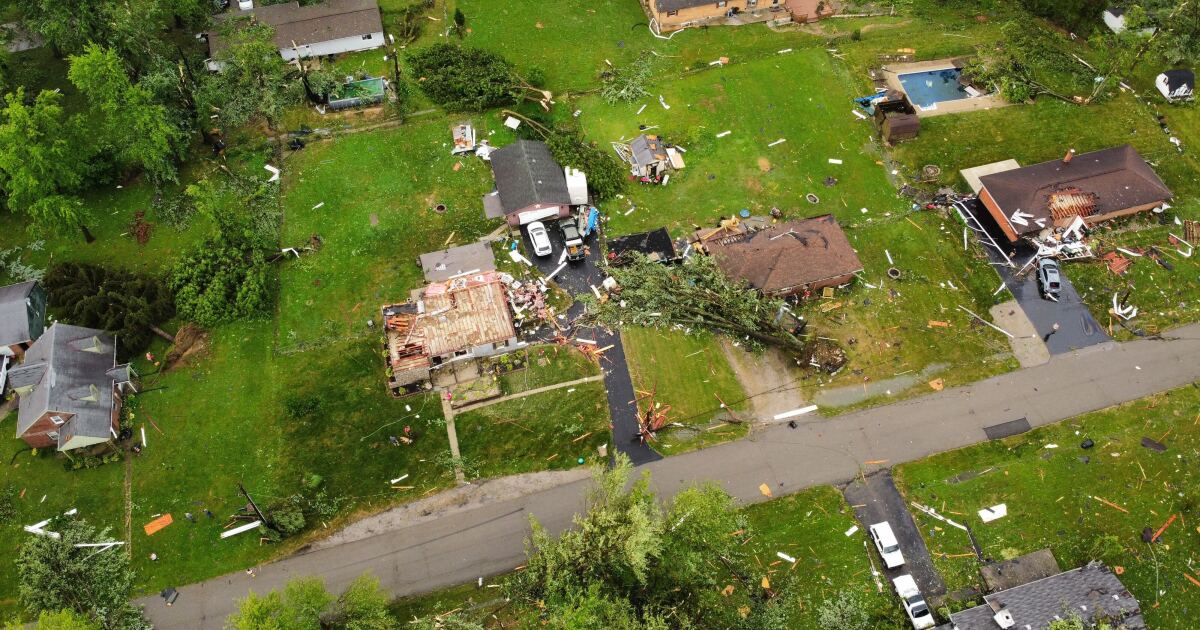 Trustees already waived fees for permits. However, some families could spend a year away from home waiting on repairs.

A tarp covers Eric and Beth Perrmann’s home. Two weeks ago, a tree branch fell on the house and snapped every roof truss. There is also a 150-year-old oak tree leaning toward their neighbors’ property. Repair costs are so staggering that the wine salesman and elementary school teacher are looking for help and optimism.

“My wife has a t-shirt that says grow through what you go through and you just try to keep that in mind,” Eric Perrmann said. “You can’t quit. You just have to keep going.”

The July 6 tornado caused a state of emergency in the township. Zoning department staff already had overwhelming numbers of permit requests for new construction before the storm. Now, demand for repairs led zoning staff to recommend changes. Trustees met to review and consider action Tuesday evening.

“Other people have it worse,” Eric Perrmann said.

The Perrmann family’s insurance company told them it could be a year before contractors finish work on their home.

“It’s tough,” Beth Perrmann said. “He travels, so he’s in Cleveland a lot. So, it’s me running the ship and it’s complicated.”

Between business trips, their two daughters’ soccer camps and their son’s 14th birthday Tuesday, the couple has split time between their rental and real home managing clean-up and unpacking. Meanwhile, they are spending $7,000 out-of-pocket on deductibles and deposits.

A GoFundMe to help them raised more than $1,800 as of Tuesday afternoon.

“It’s been surprising to our family in this time,” Eric Perrmann said. “The compassion and generosity of others has been unbelievable and hopefully people remember to continue to be compassionate and generous to those people who are seriously affected, not just our family but everyone.”

In addition to waiving fees, trustees are trying to eliminate some of the hoops residents have to jump through to submit applications.

“We’ve waived the fees in line, Clermont County, they have as well,” trustee Lisa Allen said. “We’ve streamlined the application process — made it so there’s not as many things they have to do to apply.”

Allen said they’re hoping to do everything they can to make things a little easier for those who have lost so much.

“A teacher friend was displaced — can’t go back to her home for six months, maybe a year just to get settled back into a home before school starts with her kids,” said Allen. “She had thousands of dollars out of pocket. Even though they are going to get insurance, they don’t have that right now. We want to make sure it’s easy for them to get back to some sort of normalcy.”