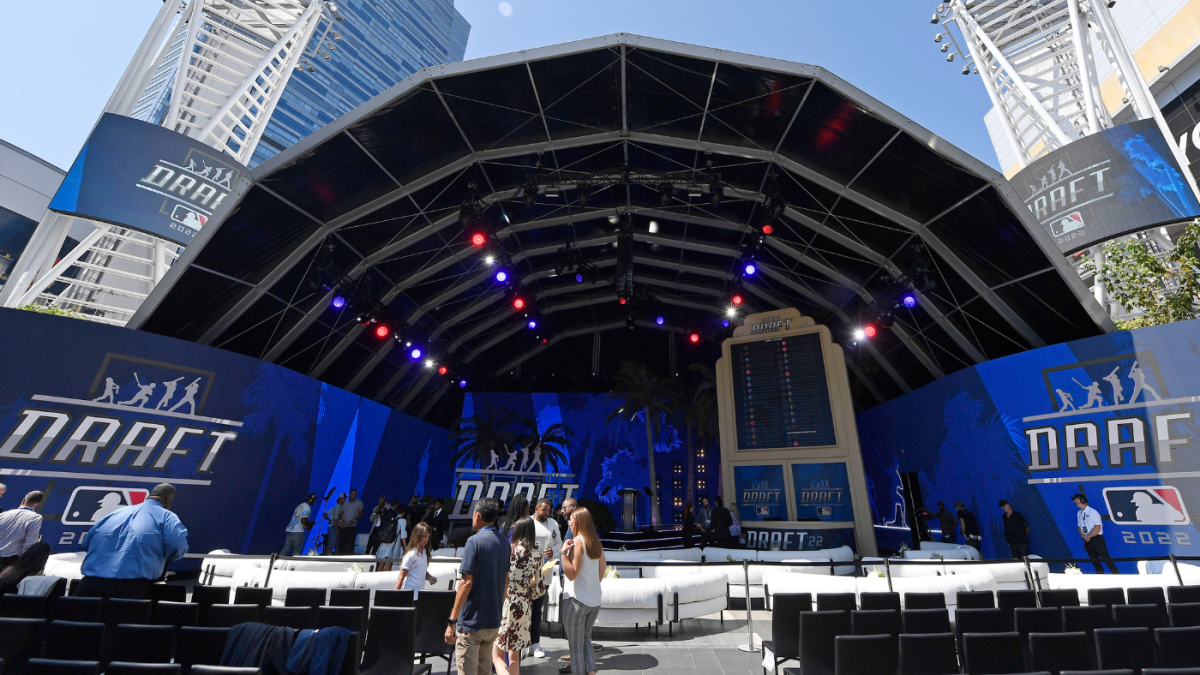 Major League Baseball’s 2022 amateur draft got started Sunday night in Los Angeles. The Baltimore Orioles hold the No. 1 pick for the third time in franchise history. The draft will consist of 20 rounds that take place over three days. Sunday night will feature the first and second round, as well as two compensatory and two Competitive Balance rounds. From there, rounds 3-10 will occur on Monday afternoon, with the rest of the class getting squared away on Tuesday afternoon.

Below, you’ll find how you can watch the MLB Draft as well as answers to eight pressing questions concerning this year’s event.

How to watch 2022 MLB Draft first round

And now for eight questions about the draft.

The Orioles, and specifically top executive Mike Elias, have become fond of the so-called “portfolio approach.” It goes like this. They’ll identify a group of players they consider to be justifiable selections at their pick, then they’ll draft the one with the lowest signing bonus demands. Those savings are then redistributed throughout the rest of their class, maximizing their overall talent accumulation.

All of that to say that the Orioles’ plans aren’t easy to pin down ahead of time. Some with other teams who have spoken to CBS Sports do expect them to take a high school position player, but it’s unclear which one. Our own Mike Axisa’s final mock draft had the Orioles going with prep second baseman Termarr Johnson.

Johnson, for whatever it’s worth, was the No. 1 ranked prospect in the class by CBS Sports in the preseason. He slipped to No. 4 in our final rankings. In other words, he would be a justifiable No. 1 pick, should the Orioles go that route.

2. Who are the best players in the class?

Clearly Johnson is one of the best prospects available. Who else fits the bill? CBS Sports’ final top-30 rankings had the following players filling out the top 10:

You can check out the rest of the top 30 rankings by clicking here.

3. Are there any players with notable bloodlines?

You may have seen the surnames “Jones,” “Holliday,” and “Collier” and wondered if those players were related to former big-league players — Andruw, Matt, and Lou, in this case. They are indeed. What’s more is they aren’t the only three with big-league bloodlines working in their favor. Carl Crawford’s son Justin and Kansas City Royals executive Dayton Moore’s son Robert are also members of this class.

You can click here to read more about how Jones, Holliday, and Crawford stack up to their All-Star fathers.

4. Is Kumar Rocker in this class?

Rocker, a former Vanderbilt standout and the No. 10 pick in the 2021 draft, is again draft eligible after failing to sign with the New York Mets last summer. He recently made a series of starts with an independent league team, showing the kind of stuff that figures to make him a first-round pick again. CBS Sports recently detailed how he went from arguably the most overexposed prospect in last summer’s draft to a relative mystery man over the course of the past year.

5. How will NIL impact signability?

One of the draft’s invisible hands, so to speak, is the concept of signability — or, basically, how likely a player is to put pen to paper. Some players will slip on draft night because teams don’t feel they’re signable; conversely, some will rise because they’re willing to take the “slot” value in order to go at a certain point in the draft.

The NCAA’s recently installed Name, Image, and Likeness policy, which enables players to (rightly) make money off their talent has changed the calculus for teams and players in that respect.

“I think that’s a real thing, I think you can link that with the amount of people utilizing the transfer portal to get additional NIL funding,” one veteran scout recently told CBS Sports. “That’s not just exclusive to kids in college, the kids going to college will be making the same asks.”

6. Whose stock is rising and whose is falling?

CBS Sports recently highlighted a number of players who are moving up or down draft boards heading into Sunday. One of the biggest risers has been Oklahoma right-hander Cade Horton. Here’s what we wrote at the time:

Horton, a draft-eligible sophomore who missed the 2021 season because of Tommy John surgery, put himself into first-round consideration with a phenomenal run during the College World Series that culminated with a Finals record 13 strikeouts. His arsenal is all about power, including a high-spin fastball that can touch into the upper-90s and a slider that was clocked as high as 90 during that aforementioned start. Horton has a limited track record (he threw just over 50 regular-season innings for the Sooners), and scouts still have lingering doubts about whether he’ll be a starter for the long haul. Still, some team seems destined to take him in the top 30-35 picks.

Horton, then, should come off the board sometime on Sunday.

Dylan Lesko, Landon Sims, Connor Prielipp, Peyton Pallette, and Reggie Crawford — all of whom were ranked in the top 50 during the preseason — all either required surgery or spent the year rehabbing from one. What’s the cause for all those injuries? Some scouts blamed the pandemic and the lack of “live innings” pitchers were able to accumulate during the course of the 2020 calendar year.

“No one denies that pitching development has taken massive steps forward in the last five years,” a scout told CBS Sports. “The problem is when you’re only able to do that and no one can throw live, the risk goes up.”

You can click here to read more about how all the injuries have altered the class.

8. Who are the most polarizing prospects?

CBS Sports recently highlighted a number of players who we deem to be “polarizing,” meaning evaluators differ in where they see said player going. One player we focused on in that piece was Tennessee’s flame-throwing reliever Ben Joyce. Here’s what we wrote:

Joyce is going to break some models, and, potentially, some mock drafts. He has a monster fastball and slider, with 43 of the former checking in at 100 mph or above during the NCAA tournament. (He topped out at, um, 105 mph during the regular season.) His heater also features good rise and is delivered from a lower arm slot, a sought-after combination these days. Teams who attempt to quantify stuff — i.e., all of them — are going to have trouble containing their excitement at what Joyce brings to the table. He’s on here anyway because there’s never been a consensus on how early is too early to take a reliever, and because teams will have drastically different timetables on when they’d expect him to reach the majors. Keep in mind, he’s thrown just 32 innings over the last two seasons due to his role and his past Tommy John surgery. A team who thinks he could reach the majors soon, perhaps even this year, might be tempted to draft him earlier than anyone else would entertain.

When will Joyce go? We’ll find out soon enough.