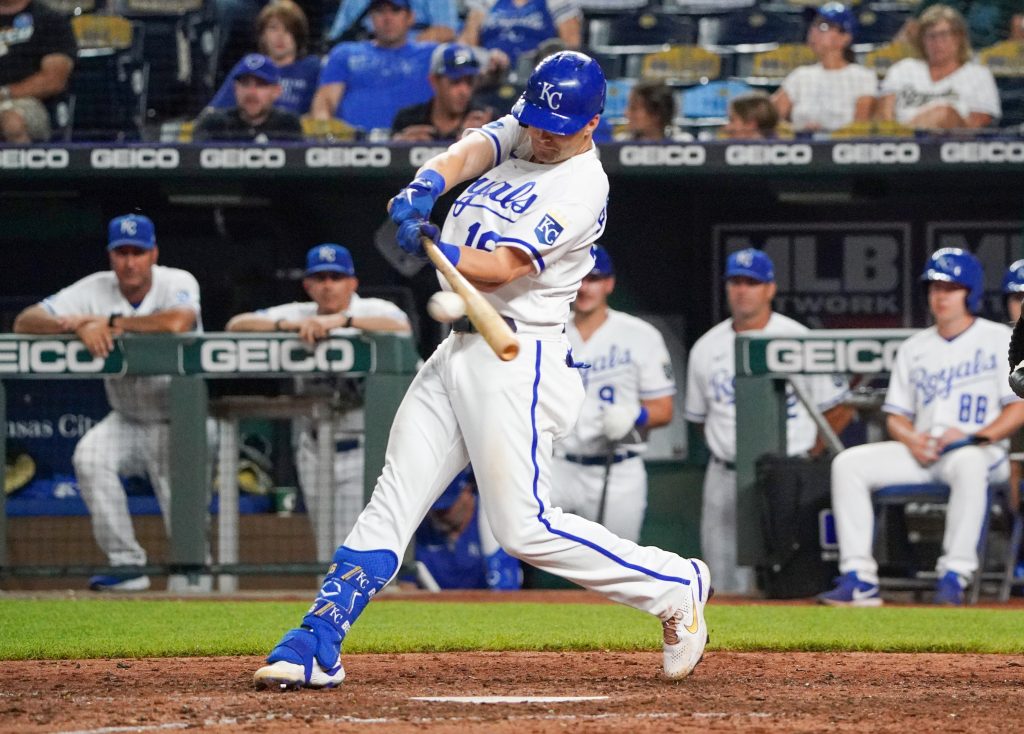 The Padres have long been expected to look for ways to bolster the offense this deadline season. The outfield looks like a particular area of concern, and AJ Cassavell of MLB.com writes that the club is indeed scouring the market for help on the grass.

San Diego has had a middle-of-the-pack offense overall, entering play Friday with a .241/.317/.374 team slash line. That includes a monster .307/.381/.525 showing from star third baseman Manny Machado, though, and the Friars’ production has been a bit top-heavy. Five players (Trent Grisham, Austin Nola, C.J. Abrams, José Azocar and Wil Myers) have taken 100+ plate appearances and been at least 15 percentage points worse than league average with the bat, by measure of wRC+. That leads to some areas rife for possible upgrades, particularly in an outfield that has been a bottom-ten unit with a .220/.303/.346 showing.

Few outfielders are more obvious trade candidates than Royals left fielder Andrew Benintendi. An impending free agent on a last place club, the 28-year-old looks like a virtual lock to change uniforms over the next few weeks. He’ll be a priority target for multiple outfield-needy teams, and Jon Heyman of the New York Post reports the Padres are among the clubs with interest.

Benintendi is hitting .317/.386/.401 through 363 plate appearances. He’s only connected on a trio of longballs, but he owns a strong 10.2% walk rate and has punched out in a career-low 14% of his trips. While he’s not making much impact from a power perspective, he brings a disciplined plate approach and makes plenty of contact. Benintendi has also rated well in left field in the estimation of Defensive Runs Saved since landing in Kansas City, and he collected a Gold Glove and finished second in Fielding Bible Award voting at the position last season.

The Friars welcomed back left fielder Jurickson Profar from the concussion injured list this evening, just a week after he suffered the scary injury in a collision with Abrams. Profar will pair with Nomar Mazara in the corner outfield, with Grisham likely to continue as the regular center fielder. Each of Profar and Mazara is having a nice season, but they own more inconsistent career track records. Grisham has had a rough year, carrying a .192/.295/.334 line into play tonight.

Cassavell suggests a center field-capable player might be a target given Grisham’s struggles, although the market for center fielders is quite thin. Oakland’s Ramón Laureano is the top center fielder with a decent chance to be dealt, but he’d require a very strong return with three seasons of club control remaining. Benintendi’s teammate Michael A. Taylor would be a more affordable fallback, although he’s had a generally up-and-down track record at the plate for his career. Benintendi has a bit of experience in center field himself, but he hasn’t logged an inning there since 2019.

Payroll limitations loom over the Padres’ deadline outlook. As MLBTR’s Steve Adams recently explored, San Diego’s luxury tax ledger is just underneath the $230MM base threshold. The organization hasn’t shown much appetite for surpassing that mark for a second consecutive season, raising questions about what kind of acquisitions president of baseball operations A.J. Preller and his staff may be able to make. Benintendi, for instance, is playing on an $8.5MM salary. Around $3.4MM of that tab will still be owed come the August 2 trade deadline, and assuming that money would push San Diego into luxury tax territory if all else remained equal. Of course, the Padres could try to offload money of their own and/or only deal with teams willing to pay down the salary of traded players if they’re intent on avoiding the CBT.

No player the Padres add from outside the organization will be a more impactful addition than Fernando Tatís Jr. The star shortstop has yet to play this season after being diagnosed with a wrist fracture in Spring Training. He’s set for a step forward, though, as Preller told Ben & Woods on 93.7 The Fan that Tatís was set to begin his hitting progression today (Twitter link). He’ll continue to be reevaluated on a week-to-week basis, but it’s a notable development as he’d long awaited clearance to begin swinging a bat.

Tatís will certainly still need a fair bit of time to build back into game shape, and he’ll then have to embark on a minor league rehab assignment to get his timing down. In the interim, the Friars will continue to split shortstop time between Ha-Seong Kim and Abrams. The former has been the primary shortstop for most of the year. He’s played excellent defense throughout the season, and he’s caught fire of late at the dish. After hitting only .232/.327/.295 in June, Kim owns a .344/.421/.531 mark through the first couple weeks of July.