A giant comet will swoop by Earth tonight. Here’s how to watch it live. 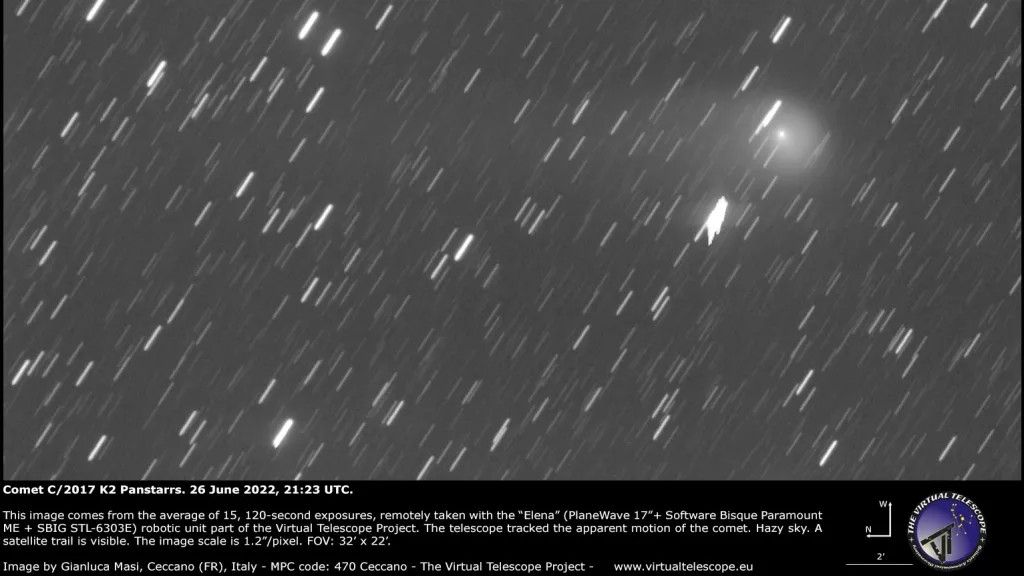 One of the farthest active comets ever spotted makes its closest approach to Earth today, July 14, and you can catch the action live online.

Comet (opens in new tab) C/2017 K2 (PANSTARRS), called K2 for short, is finally making its way into view of Earth after the first spotted by the Panoramic Survey Telescope and Rapid Response System (PanSTARRS) in the outer reaches of the solar system in 2017. At the time, K2 was considered the farthest active comet ever spotted, although it was surpassed by a distant megacomet named Comet Bernardinelli-Bernstein (opens in new tab) last year. K2 makes its closest approach (opens in new tab) to our planet on July 14, passing 168 million miles (270 million kilometers) from Earth (beyond the orbit of Mars).

Related: The massive, strange Comet K2 is touring the solar system, surprising scientists as it goes (opens in new tab)

Over the last five years, K2 has been steadily moving toward Earth. Comets, which are made of mostly frozen gases, rock and dust, become active as they approach the sun; the warmth of the sun heats the comet very quickly, causing its solid ice to turn directly into gas (a process known as sublimation) and form a cloud around the comet known as the coma.

Interestingly, K2 was already active when it was first discovered in 2017 between the orbits of Saturn (opens in new tab) and Uranus (opens in new tab), about 1.49 billion miles (2.4 billion km) from the sun, which, by comparison, is about 16 times farther away than the Earth is from the sun.

Initial observations showed the comet had a large nucleus and a massive coma. While the Canada–France–Hawaii Telescope (CFHT) suggested K2’s nucleus could be between 18 and 100 miles (30 to 160 km) wide, data from the Hubble Space Telescope (opens in new tab) indicated it might be only 11 miles (18 km) wide, EarthSky wrote.

Therefore, the comet’s upcoming close approach offers a good opportunity for professional observatories to measure just how big the nucleus really is.

The rest of us can focus on the beauty of the passing body. Webcast viewers should expect to see a fuzzy patch of light, representing the coma, surrounding the comet’s nucleus.

As the comet has continued to make its way toward the inner solar system (opens in new tab), it has also been getting brighter. During its closest approach on July 14, the comet is expected to brighten to magnitude 8 or even 7, which, unfortunately, is still too dim for the unaided eye to see, according to EarthSky.org. K2 will remain in telescope view throughout the summer before heading off for its closest approach to the sun, which will occur on Dec. 19.