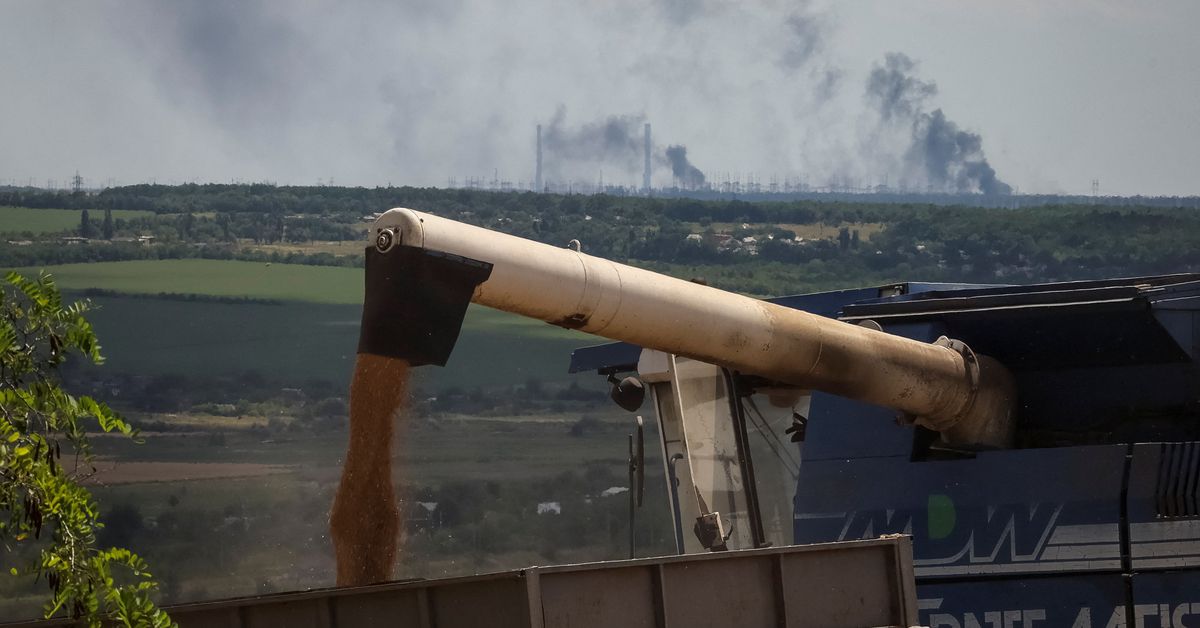 ISTANBUL/UNITED NATIONS, New York, July 14 (Reuters) – Ukraine, the United Nations and Turkey hailed progress at talks aiming to resume Black Sea grain exports blocked by Russia and ease the risk of starvation faced by millions, but an end to the war remained far off as heavy shelling continued on Thursday.

Turkey’s Defence Minister Hulusi Akar said on Wednesday an agreement would be signed next week. Ankara will ensure the safety of shipments in transit and the parties will jointly check grain cargoes in ports, he added. read more

But U.N. chief Antonio Guterres said more work was needed before a deal was finalised.

“We have seen a critical step forward,” Guterres told reporters in New York. “We still need a lot of goodwill and commitments by all parties,” he said.

Ukrainian President Volodymyr Zelenskiy appeared optimistic in late-night comments: “The Ukrainian delegation has reported to me that there is progress. In the coming days we will agree on the details with the U.N. secretary general.”

Turkey and Ukraine said a joint coordination centre with Russia and the United Nations would be set up.

“Its task will be to carry out general monitoring and coordination of safe navigation in the Black Sea,” Zelenskiy’s Chief of Staff Andriy Yermak said on Twitter.

Apart from being major global wheat suppliers, Russia is also a large fertilizer exporter and Ukraine a significant producer of corn and sunflower oil.

A deal is seen as vital for food security, notably among developing nations, and for stabilising markets.

But Guterres warned there was still “a long way to go” before there would be peace talks to end the war.

Ukrainian officials said there had been sustained shelling across several cities.

Russian forces targeted a number of civilian facilities in the southern city of Mykolaiv on Thursday, Mayor Oleksandr Senkevych said on the messaging app Telegram. Rescuers and emergency teams are already working on the ground, he added.

In the industrialised Donbas region of eastern Ukraine, Russian missiles hit the industrial zone of Kramatorsk and electricity was cut in some parts of the city, Mayor Oleksandr Honcharenko wrote on Facebook.

A Russian strike destroyed a school in Donbas on Wednesday. No casualties were reported.

Farmers harvest wheat as Vuhlehirsk’s heat power plant burns in the distance after a shelling, amid Russia’s attack on Ukraine, in the Donbas region, Ukraine July 13, 2022. REUTERS/Gleb Garanich

“All this makes me feel sick … Monsters, simply monsters, there is no other word. A school – if they themselves are ok to grow up stupid, why bomb our schools?” said 60-year-old resident Oleksandr.

Daria, 15, told Reuters that students were hoping the war would be over soon and they would go back to school, but “now, there is nothing to go back to”.

RIA news agency quoted the Russian-backed administration of Kherson region as saying Russian air defenses shot down five missiles fired at the town of Nova Kakhovka, while the debris of two of the missiles fell near a factory.

“According to preliminary information, there’s been another hit on a Russian munitions plant, at Sokil,” Serhiy Khlan, an adviser to the Ukrainian head of Kherson province, wrote on Facebook.

On Wednesday TASS quoted a separatist official, Vitaly Kiselyov, as saying Russian and proxy forces had entered the town of Siversk in Donetsk province and could take it in a couple of days.

Russia had not conducted any new assaults on the frontline that includes Siversk, but the town had been fired on by artillery, Ukraine’s armed forces said. read more

Reuters could not verify the battlefield accounts.

Russia’s Feb. 24 invasion of Ukraine has caused Europe’s biggest conflict since 1945. Millions have fled, thousands have been killed while cities have been reduced to rubble and fears of a wider conflict in the West have grown.

The Kremlin says it is engaged in a “special military operation” to demilitarise and “denazify” Ukraine. Kyiv and its Western allies reject that as a false pretext and accuse Russia of exacerbating a global food crisis and fuelling inflation.

Moscow has blamed Ukraine, saying it refuses to remove mines that it scattered around its coastline to protect itself from Russia’s attack and that threaten shipping.

The Kremlin also says Western sanctions make it harder for Russia to fund and insure its own maritime freight services.