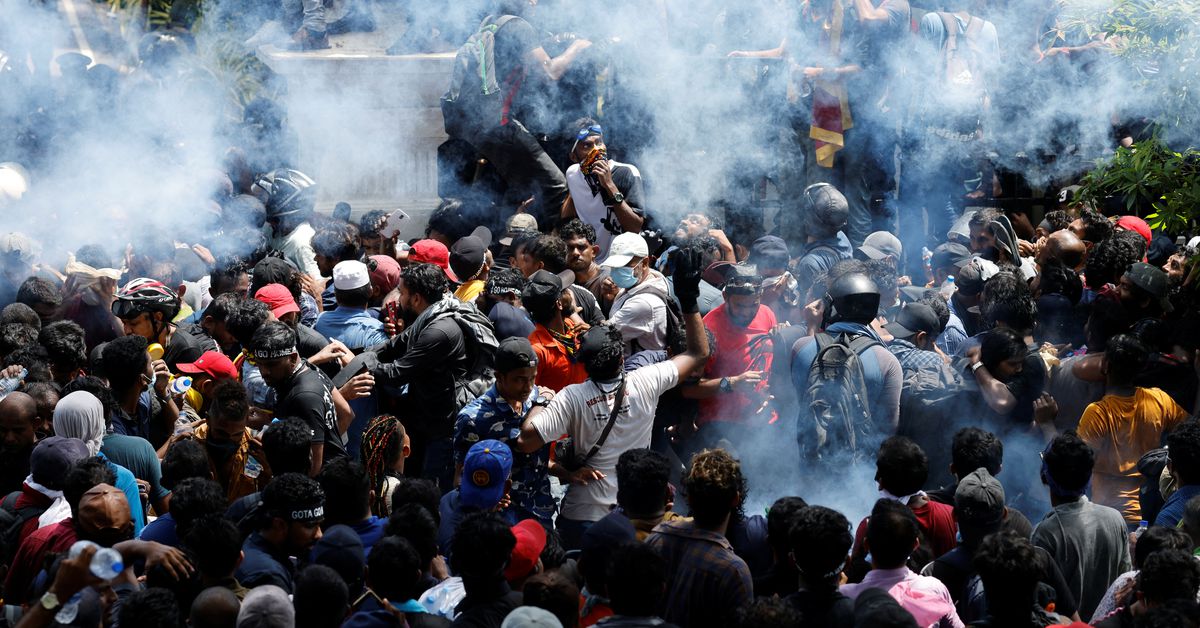 COLOMBO, July 13 (Reuters) – Sri Lankan President Gotabaya Rajapaksa fled to the Maldives on Wednesday amid a popular uprising brought on by an economic collapse, bringing to an apparent end his family’s near two-decade dominance of the country.

But his decision to leave his ally Prime Minister Ranil Wickremesinghe in charge as acting president triggered more demonstrations, with protesters storming the premier’s office demanding that he go too.

Rajapaksa, his wife and two bodyguards left the main international airport near Colombo aboard an air force plane early on Wednesday, the air force said in a statement.

He was expected to head next to Singapore, a government source said.

Wickremesinghe’s office initially declared a state of emergency and a curfew with immediate effect, then cancelled them but said the measures would be announced again later.

Police stationed outside the prime minister’s office fired several rounds of tear gas at protesters, but they were not deterred and surged into the compound. Wickremesinghe’s team declined to reveal his whereabouts.

“It feels pretty marvellous, people were trying to take this place for about three hours,” said college student Sanchuka Kavinda, 25, standing next to a mangled, open gate of the prime minister’s office. “No matter what, everyone in this crowd will be here until Ranil also steps down.”

Local media said a 26-year-old protester who was hospitalised after being tear-gassed died of breathing difficulties.

In a statement, Wickremesinghe said the protesters had no reason to storm his office.

“They want to stop the parliamentary process. But we must respect the Constitution. So security forces have advised me to impose an emergency and a curfew. I’m working to do that,” he said.

On the lower floor of the whitewashed colonial-era building, dozens of protesters sang Sinhala pop songs. A large group of security personnel armed with assault rifles sat in a room.

Protest organisers and security personnel manned a central wooden staircase at the heart of the building, guiding sightseers to and from the upper floor where the prime minister’s room is located.

At an adjoining room on the top floor, the plush furniture had been hastily pushed to the corners and a line of armed security personnel ushered visitors through.

NEW LEADER DUE NEXT WEEK

Parliament is expected to name a new full-time president next week, and a top ruling party source told Reuters Wickremesinghe was the party’s first choice, although no decision had been taken.

An attempt by Wickremesinghe to cling on would infuriate the protesters who say he is a close ally of the Rajapaksa family, which has dominated the country since Rajapaksa’s older brother Mahinda became president in 2005.

“An MP with one seat is appointed as PM. Now the same person is appointed as acting President,” the opposition presidential nominee, Sajith Premadasa, said on Twitter. “This is the Rajapaksa style of democracy. What a farce. What a tragedy.”

The parliament speaker, Mahinda Yapa Abeywardena, said Rajapaksa had phoned him and told him his resignation letter would arrive later on Wednesday.

The government source said Rajapaksa was still in Male, the capital of the Maldives, where local media reported that Singapore was likely to give him asylum. read more

An aide to Rajapaksa and the Singapore government did not immediately respond to requests for comment.

Protests against the economic crisis have simmered for months and came to a head last weekend when hundreds of thousands of people took over government buildings in Colombo, blaming the Rajapaksas and their allies for runaway inflation, shortages and corruption. read more

Wickremesinghe, whose private residence in Colombo was set ablaze on Saturday, had offered to resign as prime minister but did not repeat that offer after he became acting president on Wednesday. If he does go, the speaker would be acting president until a new president is elected on July 20 as scheduled.

The U.S. Embassy in Colombo said it was cancelling consular services for the afternoon and for Thursday as a precautionary measure.

The island nation’s tourism-dependent economy was hammered first by the COVID-19 pandemic and then a fall in remittances from overseas Sri Lankans. A ban on chemical fertilisers hit output although the ban was later reversed. read more

Petrol has been severely rationed and long lines have formed in front of shops selling cooking gas. Headline inflation hit 54.6% last month and the central bank has warned that it could rise to 70% in coming months.

Mahinda Rajapaksa, president from 2005-2015 and later prime minister under his brother, resigned in May after protests against the family turned violent. He remained in hiding at a military base in the east of the country for some days before returning to Colombo.

On Tuesday, Sri Lankan immigration officials prevented Basil Rajapaksa, who quit in April as finance minister, from flying out of the country. read more