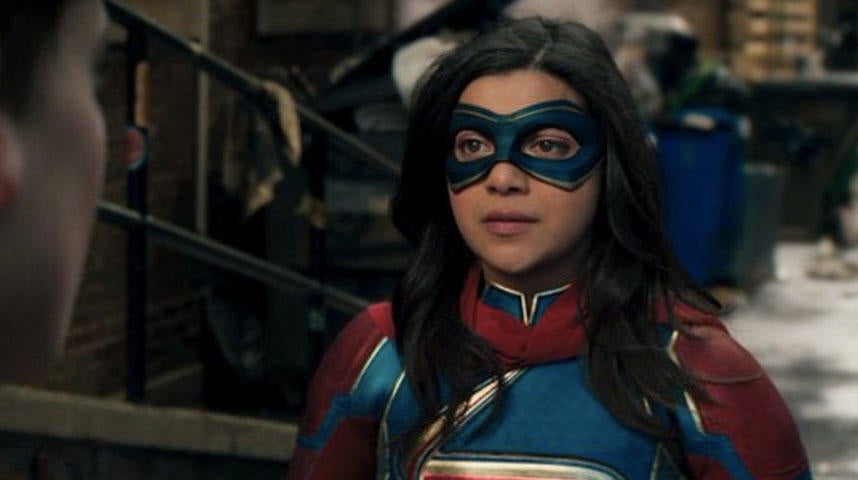 Ms. Marvel delivered its finale episode on Wednesday, offering up a major surprise for Marvel fans who were largely not expecting it. This article will contain major spoilers for a couple of surprising moments from late in the Ms. Marvel finale episode, so consider this your final warning! One surprise came in the form of a post-credits scene setting up a movie which fans are already familiar with while the other big reveal came earlier in the episode and offered up a point-at-the-TV-screen type of reference. The spoilers follow below and will be discussed on the Phase Zero show at 12pm ET!

First of all, Ms. Marvel got her name of “Ms. Marvel,” when her father called her just that late in the episode. Origin story: complete. She also said, “Embiggen,” which is her popular word when using her powers in comics, although the powers look quite different on the pages. However, she also underwent a massive change by comparison to her comic book counterpart to get those powers. In the comics, Kamala Khan possesses and Inhuman gene. However, in the Marvel Cinematic Universe, Kamala has a mutant gene.

Bruno Carrelli told Kamala Khan in the final moments of the episode that he detected a “mutation” in her genes which other humans do not possess. After Bruno said, “mutation,” a rendition of the theme song from X-Men: The Animated Series played and the song is named in the credits of the episode. Just like that, the mutant gene has been introduced to the Marvel Cinematic Universe. Marvel Studios recently featured Professor X in Doctor Strange in the Multiverse of Madness, killing off the leader of an alternate universe’s X-Men characters as quickly as he was introduced. The Earth-838 sequence in the Strange sequel was the first time Marvel Studios used an X-Men character which we had previously seen in movies. Now, Earth-616 (as it was labeled in that same Strange sequel) has been revealed to have the mutant gene floating around.

After the reveal of Kamala Khan being a mutant in the MCU, a post-credits scene offered up a connection to The Marvels. The Marvels will be where Kamala appears next, due in theaters in 2023. Ms. Marvel is now the most recent appearance of Brie Larson’s Captain Marvel, with the character previously showing up in the credits scene attached to Shang-Chi and the Legend of the Ten Rings. Kamala and Carol Danvers seem to have traded places in the Marvel Cinematic Universe, likely showing how the two will come to cross paths in The Marvels and ultimately team up, also having Monica Rambeau join the party.

The timing of these reveals in Ms. Marvel is really something. San Diego Comic-Con is set to play host to Marvel Studios and its “mega panel” on Saturday. Might there be an X-Men reveal on the way?

What did you think of the big reveals packed into the final episode of Ms. Marvel? Share your thoughts in the comment section or send them my way on Twitter! Ms. Marvel is available now on Disney+. The Marvels hits theaters on July 28, 2023.