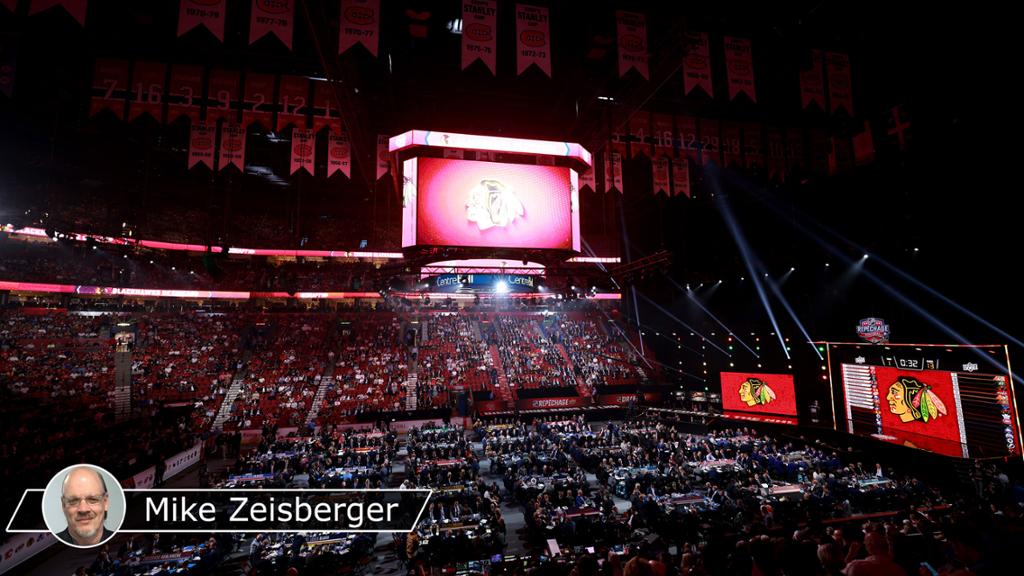 MONTREAL — The Chicago Blackhawks came into the 2022 Upper Deck NHL Draft at Bell Centre on Thursday with no first-round picks. By the time general manager Kyle Davidson had finished wheeling and dealing, they had three.

“Sitting where we are right now with the prospects we just picked up, I’m pretty damn happy,” he said after the first round.

Whether the cost was worth it remains to be seen.

“It was a pretty monumental day and huge land shift for the Blackhawks organization,” Davidson said, “but it’s almost the unofficial start of where we’re headed and our ascension there.”

Yes, the Blackhawks augmented their cache of prospects by selecting defenseman Kevin Korchinski at No. 7, center Frank Nazar at No. 13 and defenseman Sam Rinzel at No. 25. But to get the first two, they had to give up young forwards Alex DeBrincat and Kirby Dach.

Not long ago, they were considered key pieces in a Blackhawks rebuild. Not anymore.

“It’s difficult to trade any young player, and especially young contributors like we did today,” Davidson said. “It’s definitely not easy and definitely not fun. Doing things you have to do to get where you want to go is not fun. There’s going to be tough days like this where you see familiar faces that we in management and the fans know and love but it’s necessary to get where we want to be.

“It’s all about process. It’s our job to make sure the assets we bring in in making our decisions are the right ones and make it justified. It’s on us to turn those players into players long term, and that process started today.”

The Blackhawks traded DeBrincat to the Ottawa Senators about three hours before the start of the draft for three picks: Ottawa’s first- and second-round selections (Nos. 7 and 39) in the 2022 draft and a third-round pick in the 2024 NHL Draft.

Chicago then capped off a busy night by acquiring goalie Petr Mrazek and the No. 25 pick in the 2022 draft in a trade with the Toronto Maple Leafs for a second-round pick (No. 38) in the same draft. Davidson said the deal was primarily made to acquire Rinzel.

“I think we’ve got some really high quality prospects in our system,” Davidson said. “Coming into today, if I figured we would add Kevin Korchinski, Sam Rinzel and Frank Nazar, I wouldn’t have believed you.”

Davidson said the common thread between all three is elite skating skills.

Nazar (5-10, 180) had 70 points (28 goals, 42 assists) in 56 games with the USA Hockey National Team Development Program Under-18 team this season. He will attend the University of Michigan in the fall.

Rinzel (6-4, 180) split this season between Chaska High School in Minnesota and Waterloo of the United States Hockey League and combined for 48 points (11 goals, 37 assists) in 48 games. He is committed to the University of Minnesota for next season.

Davidson said Blackhawks fans will need to be patient to see this young core develop, especially with what Chicago gave up.

“I think it’s difficult anytime familiar faces go out the door, and I understand that, but you know what?” he said. “We’re still going to have a team that loves to play for the city of Chicago and that loves to wear that Blackhawks sweater and is going to bring it every night.”