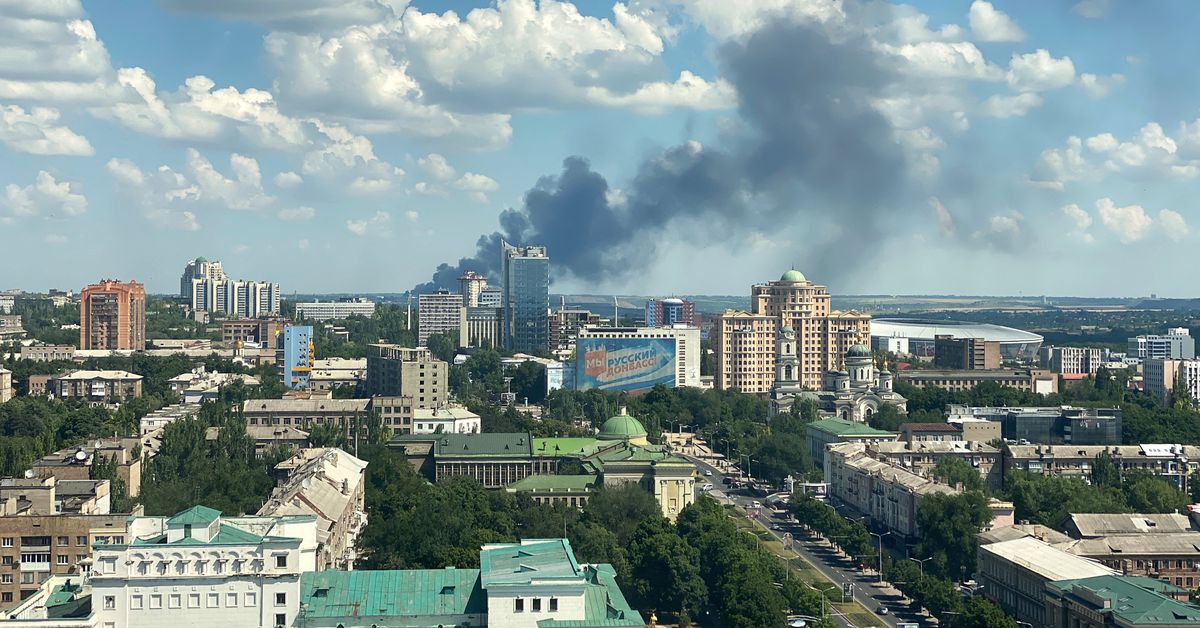 The strikes, reported by regional officials and the Russian military, followed Moscow’s capture of the Ukrainian city of Lysychansk on Sunday, a move that handed it total control of the Luhansk region, one of its main war aims.

Taking full control of Donetsk, the neighbouring region in Donbas, the industrialised eastern part of Ukraine that has become the stage of the biggest battle in Europe for generations, is another goal of what Moscow calls its “special military operation.”

Ukrainian troops who retreated from Lysychansk at the weekend took up defensive lines in the Donetsk area on Tuesday, according to Serhiy Gaidai, the governor of the Luhansk region. Ukrainian forces were resisting Russian attempts to advance towards Sloviansk, a Ukrainian defence ministry spokesperson said.

In a foretaste of what is likely to keep happening in coming weeks, Pavlo Kyrylenko, governor of the Donetsk region, said on TV that his region had been hit overnight.

“Sloviansk and Kramatorsk came under shelling. They are now also the main line of assault for the enemy,” he said. “There is no safe place without shelling in the Donetsk region.”

Police in Sloviansk said a woman had been killed and at least three other people wounded by a Russian strike on the market there. Reuters could not immediately independently verify the report.

A Reuters reporter on the scene saw yellow smoke billowing from an auto supplies shop, and flames engulfing rows of market stalls as firefighters tried to extinguish the blaze.

Vadym Lyakh, the city’s mayor, wrote on Facebook that the centre and north of Sloviansk had been shelled.

“Everyone remain in shelters!,” he wrote.

The Russian defence ministry, which says it does not target residential areas, said it had used high-precision weapons to destroy command centres and artillery in the Donetsk region, where Ukraine still controls a number of major cities.

President Vladimir Putin has told troops involved in capturing Luhansk who would also be part of any attempt to capture cities in Donetsk, to “rest and recover their military preparedness”, while units in other parts of Ukraine keep fighting.

Both sides suffered heavy casualties in the fight for Luhansk, particularly during the siege of the twin cities of Lysychansk and Sievierodonetsk. Both have been left wrecked.

A Reuters reporter who visited Lysychansk on Monday found widespread destruction and few residents in a city that was once home to nearly 100,000 people. read more

Since the outset of the conflict, Russia has demanded that Ukraine hand both Luhansk and Donetsk to Moscow-backed separatists, who have declared their independence.

Johnson updated Zelenskiy on the latest deliveries of British military equipment, including 10 self-propelled artillery systems and loitering munitions, which would be arriving in the coming days and weeks, a spokesperson said.

“This is the last victory for Russia on Ukrainian territory,” Arestovych said in a video posted online.

He said besides the battle for Donetsk, Ukraine was hoping to launch counter offensives in the south of the country. Russia might struggle to redirect its forces there with 60% of them now concentrated in the east, he said.

“And there are no more forces that can be brought in from Russia. They paid a big price for Sievierodonetsk and Lysychansk.”

Some military experts reckoned the hard fought victory had brought Russian forces little strategic gain, and the outcome of what has been dubbed the “battle of the Donbas” remained in the balance.

“I think it’s a tactical victory for Russia but at an enormous cost,” said Neil Melvin of the RUSI think tank in London.

Melvin said the decisive battle for Kyiv was likely to be fought not in the east, where Russia is mounting its main assault, but in the south, where Ukraine has begun a counter-offensive to recapture territory around the city of Kherson.

“There are counter-attacks beginning there and I think it’s most likely that we’ll see the momentum swing to Ukraine as it tries to then mount a large-scale counter-offensive to push the Russians back,” he said.

Early on Tuesday, Russian rockets hit Mykolaiv, a southern city on the main highway between Kherson and Odesa, the mayor, Oleksandr Senkevych, said.

Zelenskiy said on Monday that despite Ukraine’s withdrawal from Lysychansk, its troops continued to fight.

“The armed forces of Ukraine respond, push back and destroy the offensive potential of the occupiers day after day,” Zelenskiy said in a nightly video message.

“We need to break them. It is a difficult task. It requires time and superhuman efforts. But we have no alternative.”