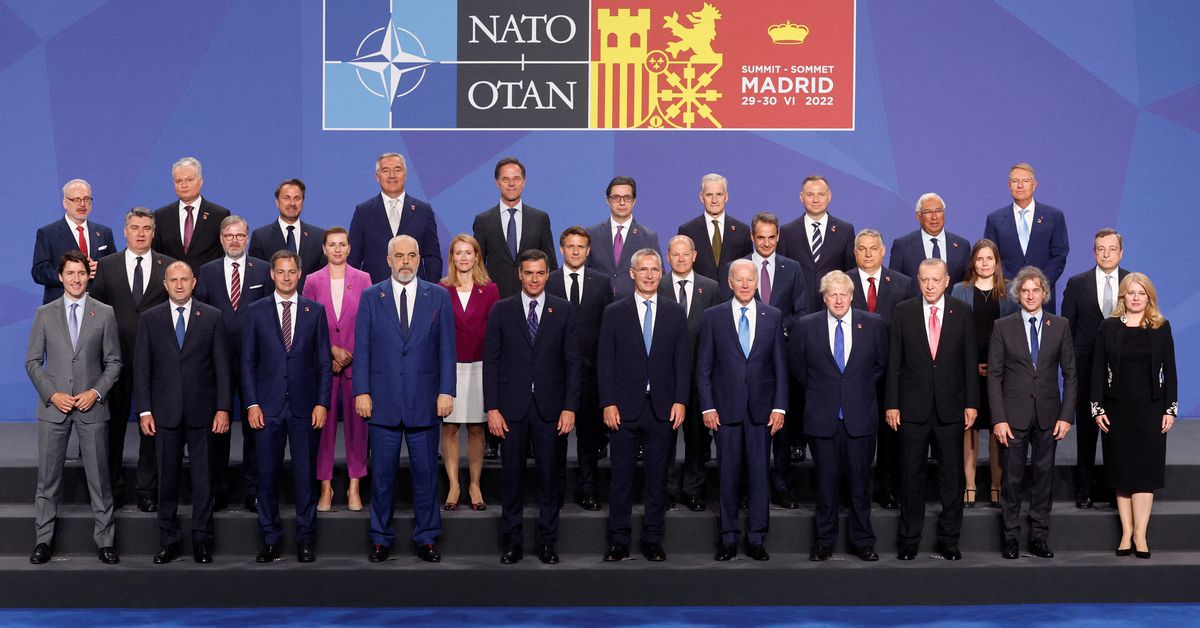 MADRID, June 29 (Reuters) – Sweden and Finland on Wednesday looked set for fast-track membership of NATO after Turkey lifted a veto on them joining, at a summit where the U.S.-led alliance is due to adopt a broad strategy focused on Russian and China for the next decade.

After talks in Madrid, Turkish President Tayyip Erdogan on Tuesday agreed with his Finnish and Swedish counterparts a series of security measures to allow the two Nordic countries to progress in their bid to join the U.S.-led alliance.

“We will make a decision at the summit to invite Sweden and Finland to become members,” NATO Secretary-General Jens Stoltenberg said of the two countries, who overturned decades of neutrality to apply to join the alliance in mid-May.

The agreement, hailed as a victory for Erdogan in Turkish media, removed a major hurdle to the Nordic nations joining. Their bid must now be approved by the member states’ parliaments, a process that could take some time.

Russia’s Feb. 24 invasion of Ukraine has given a new impetus to the North Atlantic Treaty Organisation, which was founded in 1949 to defend against the Soviet threat, after failures in Afghanistan and internal discord during the era of former U.S. President Donald Trump.

“We are sending a strong message to (Russian President Vladimir) Putin: ‘you will not win’,” Spanish Prime Minister Pedro Sanchez said in a speech.

In a sign of Western momentum, the NATO summit, which began on Tuesday evening with a dinner at Spain’s royal palace, will welcome the leaders of non-NATO members Australia, New Zealand, Japan and South Korea.

NATO is seeking to forge closer ties with those countries to counter China and Russia, who in early February issued a joint statement rejecting NATO’s expansion in Europe and challenging the Western-led international order.

“The Russian invasion of Ukraine has produced a more united world, in terms of democratic nations, and a resolve that is strong and clear. And I believe it will be decisive as well,” Australian Prime Minister Anthony Albanese told a think-tank event in the summit margins.

Allies are set to agree on NATO’s first new strategic concept – its master planning document – in a decade.

Russia will be identified as NATO’s “main threat” in the strategic concept, Spain’s Sanchez said. Russia was previously classed as a strategic partner of NATO.

NATO heads of states and governments pose for a photo during a NATO summit in Madrid, Spain June 29, 2022. REUTERS/Susana Vera

Russia’s invasion of Ukraine is “a direct threat to our Western way of life,” Belgian Prime Minister Alexander de Croo added, citing the wider impact of the war, such as rising energy and food prices.

The planning document will also cite China as a challenge for the first time, setting the stage for the 30 allies to plan to handle Beijing’s transformation from a benign trading partner to a fast-growing competitor from the Arctic to cyberspace.

Unlike Russia, whose war in Ukraine has raised serious concerns in the Baltics of an attack on NATO territory, China is not an adversary, NATO leaders have said. But Stoltenberg has repeatedly called on Beijing to condemn Russia’s invasion of Ukraine, which Moscow says is a “special operation”.

At the summit, NATO is due to agree a longer-term support package for Ukraine, in addition to the billions of dollars already pledged in weapons and financial support.

German Chancellor Olaf Scholz said that arms would continue to be supplied to Kyiv, which seeks help to overpower Russian artillery, particularly in eastern Ukraine, where Russia is slowly advancing in a grinding war of attrition.

“The message is: We will continue to do so – and to do this intensively – for as long as it is necessary to enable Ukraine to defend itself,” Scholz said.

The Western alliance is also set to agree that big allies such as the United States, Germany, Britain and Canada pre-assign troops, weapons and equipment to the Baltics and intensify training exercises. NATO is also aiming to have as many as 300,000 troops ready for deployment in case of conflict, part of an enlarged NATO response force. read more

Russia is achieving the opposite of what Putin sought when he launched his war in Ukraine in part to counter the expansion of NATO, Western leaders say.

Both Finland, which has a 1,300 km (810 mile) border with Russia, and Sweden, home of the founder of the Nobel Peace Prize, are now set to bring well-trained militaries into the NATO, aimed at giving the alliance Baltic Sea superiority.

“One of the most important messages from President Putin … was that he was against any further NATO enlargement,” Stoltenberg said on Tuesday evening. “He wanted less NATO. Now President Putin is getting more NATO on his borders.”