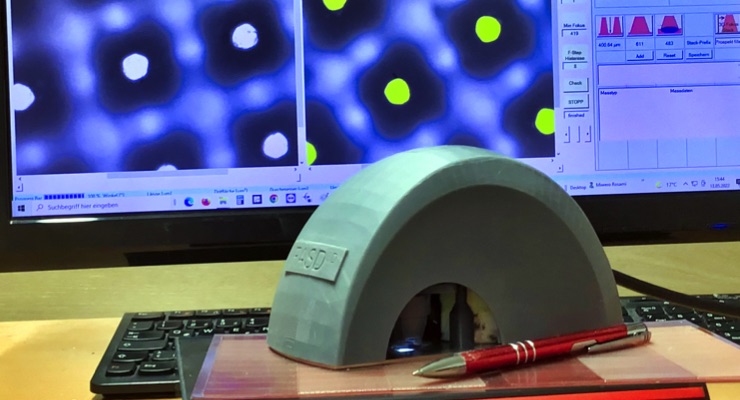 Sibress, the German manufacturer of measuring and analysis systems for quality control in flexographic and packaging printing, has launched the new FADS3D mobile measuring device for two- and three-dimensional analysis of flexographic plates. This latest Sibress innovation can additionally be used in semi-automatic mode for measuring metal-backed photopolymer printing plates (letterpress plates). Deployable anywhere and easy to use, Sibress FADS3D is touted as groundbreaking measurement device combining full-featured capabilities in an exceptionally compact package.

The newly developed FADS3D is patent-pending and part of Sibress’ systematic drive to improve and evolve the FC3D series. FADS3D uses a high-resolution camera to capture the surface as well as the recessed sections of dots and their base on the flexo plate. In addition to standard plate measurement functions, the instrument enables precise depth measurements based on digital images captured using Z-stacking (focus stacking). In practice, this means that Sibress FADS3D is also capable of accurately measuring the relief of flexo plates with a depth of more than 1350 µm. The increment per shot / layer is less than 5 µm when measuring in the Z-axis.

The new Sibress measuring instrument produces images that are razor sharp from the plate surface to the intermediate depths of the halftone dots and image areas. In other words, everything from the dot surfaces to the base areas of the plates can be visually checked in the Versatile@flex software using one and the same image.

As a special highlight, Sibress FADS3D provides a high-resolution, perspective 3D view of the captured plate area. The visualization is freely selectable from 360 degrees so that the shoulder and flank areas of halftone dots, for example, can be examined from different perspectives. Among other things, the new, enhanced measurement functions allow determination of the flank angle.

As far as standard measurement functions are concerned, Sibress FADS3D can analyze screens from 28 to more than 240 l/cm (71 to >620 lpi) as well as FM, hybrid, and newer specialty screens like Bellissima. All dots in the active control patch (larger than 3 mm2) are captured and evaluated by the Versatile@flex software. Parameters such as halftone value, screen, dot diameter and dot perimeter are instantly recognizable.

Other functions include statistics, storing measurement curves and automated creation of measurement reports complete with graphics. The depth value in µm is automatically determined during depth measurements and can be uploaded to an Excel file. The measurement histories obtained in this way are an important source of information for users, for instance when it comes to plate reusability. No comparable product in the market today offers this capability. Precise metrological verification of key parameters prior to reusing archived plates can reveal wear effects as well as storage-induced changes before these plates have a chance to compromise print quality and cause expensive press downtime.

Sophisticated, largely automated calibration procedures for 2D and 3D capture ensure that measurements with Sibress FADS3D are permanently accurate and reproducible. A new, specially developed calibration tool guarantees repeatable depth measurements. This tool is equipped with special LED annular illumination and a precisely defined sphere, the size of which determines the calibration value.

“FADS3D is the universal solution for quality control of flexo printing plates – from platemaking at repro service providers to incoming inspection and inventory control functions at packaging printers”, says Sibress Managing Director Michael Romanowski. “In addition to several metrological refinements, our new measuring instrument’s sharp reproduction of the entire relief depth range coupled with true 3D visualization make it a simple matter to check the results of the washing process in detail, for example, or the condition of archived flexo plates before they are reused.”