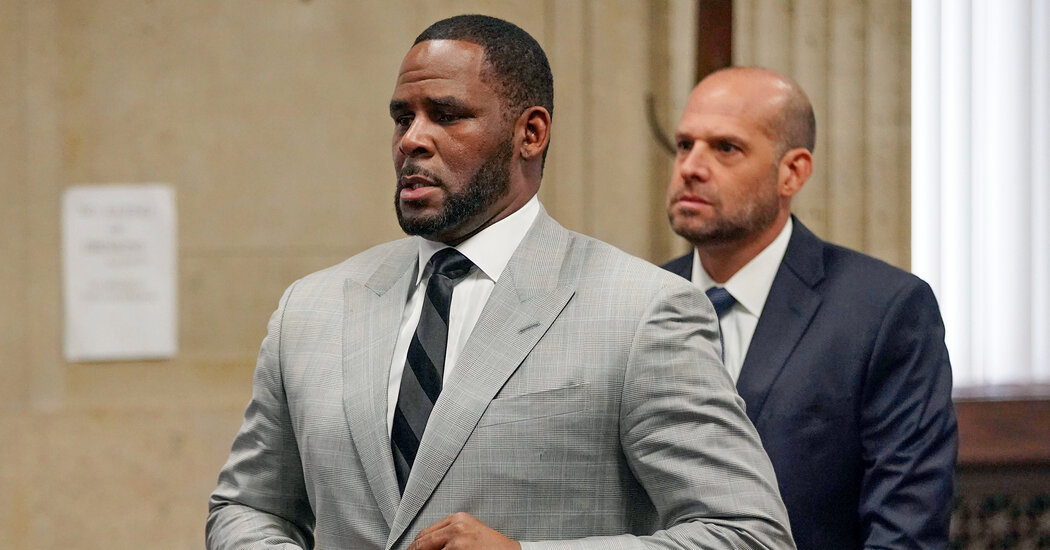 Throughout the singer R. Kelly’s six-week trial, federal prosecutors called 45 witnesses, including former employees, a doctor who treated him for herpes for more than a decade and relatives of his accusers. But the foundation of the case was based on his encounters with several women, some of whose identities were shielded in court.

Mr. Kelly met Aaliyah in 1992 at her family home in Michigan, and produced her debut album, “Age Ain’t Nothing but a Number.”

By the time she was 13, he had begun to sexually abuse her, prosecutors said. In 1994, Mr. Kelly illegally married her, believing that she may have been pregnant and seeking to avoid prosecution. The two had a 10-minute ceremony in a Sheraton hotel room in the Chicago area. Their marriage was later annulled.

Aaliyah, whose full name was Aaliyah Dana Haughton, died in 2001 in a plane crash at 22.

Ms. Pace took the stand on the first two days of the trial, becoming the first accuser to ever testify against Mr. Kelly in court. She was also one of the earliest women to go public with her accusations in a 2017 BuzzFeed article that set off a round of public outrage against the singer.

Angela, a backup singer who said she was in high school when the abuse began

As the first victim to make a statement at the sentencing hearing, a woman who gave her name only as Angela, said previously that she met Mr. Kelly around 1991, when she was between 14 and 15.

Mr. Kelly began to have sex with her while she was underage and a student in high school, she testified during the trial last year. She also recounted how he often pressured her and several other backup performers to have sex.

Angela was also the first accuser to testify that she had seen Mr. Kelly and Aaliyah engaged in sexual acts.

During the sentencing hearing, Angela stood at a lectern as she looked directly at Mr. Kelly and spoke in an unwavering voice. She called Mr. Kelly a Pied Piper who lured children with his money and celebrity.

“With every addition of a new victim, you grew in wickedness,” she said. “You used your fame and power to groom and coach underage boys and girls for your own sexual gratification.”

Today “we reclaim our names,” she said. “We are no longer the preyed-upon individuals we once were.”

Stephanie, who was also underage when she was abused

A woman who took the stand during the trial giving only her first name, Stephanie, said that she approached Mr. Kelly at a Nike store in 1999, when she was 17, to ask him for an audition for a friend who aspired to be a singer.

Mr. Kelly agreed, in return for sexual favors, she said. The next six months were “the lowest time of my life,” Stephanie told jurors.

A woman who testified under a pseudonym

The woman, who gave some of the most graphic testimony of physical and sexual abuse at trial, had initially backed Mr. Kelly in a high-profile interview with Gayle King of “CBS This Morning” in 2019.

But she told jurors the singer often instructed her to rehearse answers to potential questions from reporters or the public, providing her with the “proper” responses — even if they were false.

Faith, who said the singer did not disclose a sexually transmitted infection

Faith, who was the sixth woman to speak at the sentencing hearing, said during the trial that she began having sex with Mr. Kelly in 2017, when she was 19. But the encounters turned violent at times, she said at the time, and on one occasion, Mr. Kelly brought her into a room with a gun, grabbed her neck and directed her to perform a sex act on him.

A short time after another sexual encounter, she was diagnosed with herpes. Faith said Mr. Kelly never told her he had the incurable disease. “I said, ‘Are you going to use a condom?,’” she recalled asking Mr. Kelly during their first sexual encounter. “He said, ‘We don’t need a condom.’”

During the hearing, Faith appeared with her father at her side. “I hope you forgive yourself,” she said as she cried. “I forgive myself.”

Sonja, who said she was imprisoned and raped

Sonja, who also spoke at the sentencing hearing, was a 22-year-old radio intern when she met Mr. Kelly outside a mall in Salt Lake City, and he invited her to come to Chicago for an interview in 2003, according to earlier testimony.

But when she arrived, she previously said, Mr. Kelly locked her in a room in his studio for days. She had no food, but was eventually brought something to eat. Then, after she took several bites, she began feeling drowsy, she said. She told jurors she later woke up to find her underwear draped over the couch and Mr. Kelly pulling up his pants.

During the sentencing hearing, she described how Kelly would have people watch and follow her over the years. “I was scared for my life,” she said.

Sonja also emailed a statement to the court that she did not wish to read in full. But before leaving the lectern, she added: “I hope and I pray to God that we can all heal.”