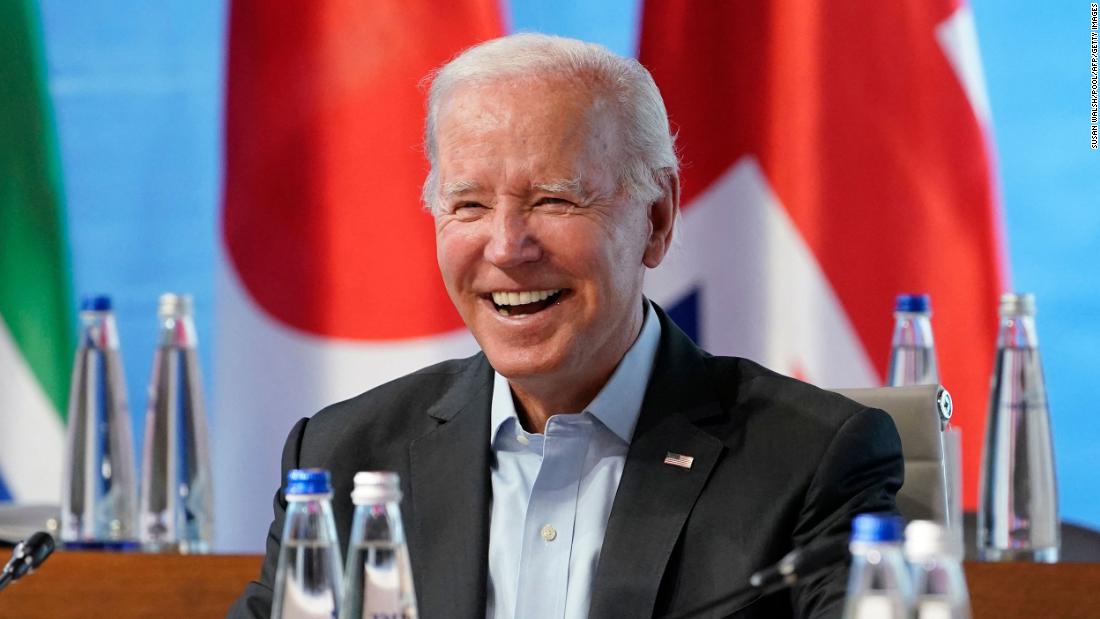 The announcements expected over the course of the two-day summit would harden the collective’s defenses as Russia’s invasion of Ukraine enters its fifth month. Not since the Cold War has NATO made such significant enhancements to its posture.

Biden and his fellow leaders are eager to change the momentum on the ground in Ukraine, where Russia continues to make gains in the East.

A missile strike Monday on a shopping mall in the in the Ukrainian city of Kremenchuk was a reminder of Russia’s continued brutality.

“Russia’s attack on civilians at a shopping mall is cruel. We stand in solidarity with the Ukrainian people,” Biden wrote on Twitter. “As demonstrated at the G7 Summit, the US along with our allies and partners will continue to hold Russia accountable for such atrocities and support Ukraine’s defense.”

Biden arrives to the NATO gathering after wrapping up final meetings with G7 leaders in Germany, where the Ukraine crisis dominated conversations among leaders. Agreements on sanctions and trying the limit the price of Russian oil were expected to come out of the gathering.

Biden met Tuesday morning with Chancellor Olaf Scholz of Germany, President Emmanuel Macron of France and Prime Minister Boris Johnson of the United Kingdom on the margins of the G7, which is taking place in Germany’s Bavaria region. The group has played the most significant role in orchestrating the Western response to the war in Ukraine, though differences in opinion exist over how and when to engage Russian President Vladimir Putin in negotiations to end the war.

G7 leaders are announcing up to $5 billion funding in global food security Tuesday in the latest effort to counter global effects from the war in Ukraine, more than half of which will come from the United States.

As part of Tuesday’s announcement, the Biden administration is committing $2.76 billion “to support efforts in over 47 countries and regional organizations,” including $2 billion in direct humanitarian aid and $760 million “for sustainable, near and medium-term food assistance to help enhance the resilience and productivity of food systems around the world, particularly in vulnerable regions,” a senior administration official told reporters Tuesday.

According to White House estimates, Russia’s invasion of Ukraine and the subsequent destruction of agriculture equipment and blockade of grain shipments will push up to 40 million people into poverty in 2022. The Biden administration has attempted a number of stopgap measures to move the grain and avert a “catastrophic food shortage” in parts of the world.

“Obviously, Putin’s actions have been at the core, and the thing from which you can draw a direct line to all of the vulnerabilities that we’re seeing around the world in terms of food security — his actions have strangled food and agricultural production, using food as a weapon of war,” the official said. “This is just one piece of our efforts, and we’re committed to do everything we can, both as the United States and the G7, to work with partners around the world to address.”

The US’s commitment will come from the second Ukraine supplemental assistance package lawmakers passed last month, and is expected to be allocated and delivered by the end of the fiscal year. According to the official, leaders also discussed “a range of approaches” to get Ukraine’s grain to market and address global shortages, adding the issue was “at the very top of the list of priorities the leaders have with respect to addressing the food security challenge.”

Tuesday’s announcement comes on the last day of the G7 Summit in Schloss Elmau, Germany, where leaders are also expected to condemn the harms caused by China’s “non-transparent market distorting industrial practices,” in a communique wrapping the summit.

The President will travel to Madrid in the afternoon. Leaders attending the NATO summit are expected to endorse a new “Strategic Concept” that outlines the defense alliance’s goals for the next decade. These priorities include “building resilience against transnational threats including cyber and climate” and “deepening partnerships with democratic partners in Europe and Asia in order to strengthen the rules-based international order,” the White House says.

NATO Secretary General Jens Stoltenberg said Monday the alliance would scale up the number of troops on high alert to 300,000, a sevenfold increase that reflects the grinding war in Ukraine.

Stoltenberg said Russia had walked away from any partnership with NATO, and the group was obligated to respond.

“They have chosen confrontation instead of dialogue. We regret that — but of course, then we need to respond to that reality,” he said.

Biden will meet on Tuesday with President Pedro Sánchez of Spain and His Majesty King Felipe VI of Spain, according to a schedule provided by the White House. Biden and Sánchez are expected to hold a bilateral meeting to discuss coordination on support for Ukraine as well as combating the global climate crisis, improving global health security and promoting economic prosperity in Latin America, the Caribbean and Africa.

The President and first lady Jill Biden will then attend a dinner Tuesday evening for leaders attending the NATO summit, which will be hosted by King Felipe VI and Her Majesty Queen Letizia of Spain.

Challenges at home and abroad

The summit comes as Russia’s invasion of Ukraine stretches into its fifth month and as the US looks to keep allies united in its support for Ukraine and sustain the pressure on Russian President Vladimir Putin.

But it also comes as leaders face the threat of a global recession and the Biden administration grapples with soaring inflation and high prices and interest rates at home. The mounting economic concerns have raised questions about whether the united Western response to the conflict in Ukraine can be sustained in the long term as the war grinds on.

The US assessment of the war increasingly envisions a long and punishing battle in eastern Ukraine that will result in high personnel losses on both sides. Ukrainian President Volodymyr Zelensky told G7 leaders during a virtual meeting on Monday that he wants the war in Ukraine to end by the end of 2022, according to a source familiar with his remarks.
US and European officials are also eying the summit for potential progress in moving Finland and Sweden’s applications forward to join NATO. The two nations formally applied to be part of the security alliance in May, propelled by Russia’s invasion of Ukraine. But Turkish President Recep Tayyip Erdoğan has said it won’t support the bids and has accused the two countries of harboring members of the separatist militant Kurdistan’s Workers Party, also known as PKK, which Turkey views as a terrorist organization.

On Tuesday, Erdoğan told reporters that he spoke with Biden and could meet with the US President in Madrid. Sweden and Finland’s applications to join NATO will be top of mind, Erdoğan said.

“The PKK will be on our agenda in my bilateral meetings. We will explain our position to Sweden and Finland once again. The PKK should be prevented from acting in these countries,” he said, adding, “If they are to become a member of NATO, they have to address Turkey’s security concerns. We do not want dry words, we want results.”

US national security adviser Jake Sullivan told reporters at the G7 summit that the goal ahead of the NATO summit in Madrid was to “create as much positive momentum as we can behind the candidacies of Finland and Sweden,” though he cautioned, “I am not sitting here today suggesting that all issues will be resolved by Madrid.”

The US is also preparing to announce the purchase of an advanced medium-to-long range surface-to-air missile defense system that Ukraine’s president requested. The announcement could come as soon as this week, and comes in addition to the several packages of military assistance the US has provided since Russia invaded Ukraine in February.

The US will also be unveiling other new sanctions, including on Russian defense companies and individuals. The leaders have agreed to ban imports of new Russian gold, which is the country’s second largest export after energy.