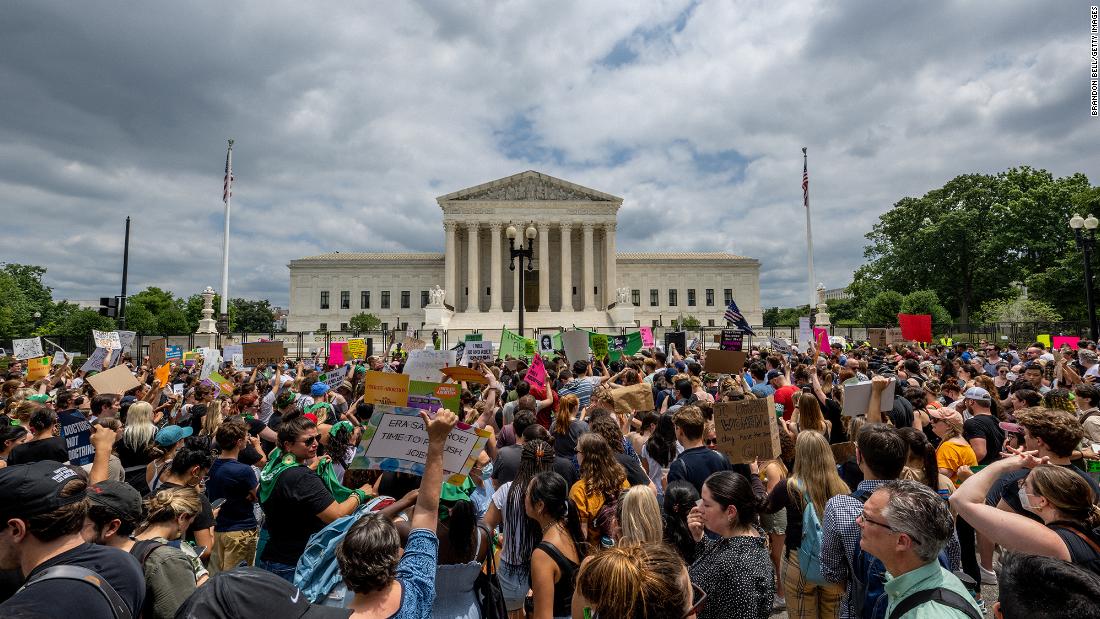 The court’s decision to roll back the nearly 50-year-old landmark ruling, which protected the federal, constitutional right to an abortion, is expected to transform the landscape of reproductive health in America, leaving abortion policy up to individual states and paving the way for numerous states to pass new abortion restrictions. As of Friday afternoon, state officials in at least seven states said that new abortion bans can now be enforced.
Millions of people seeking abortions could soon be forced to travel across state lines to access the procedure, adding to the cost of an already often expensive healthcare service. For many, employers’ benefit packages may be the only way they can afford an abortion.
In response, corporations, some with headquarters or offices in Republican-controlled states, are taking action. Companies such as Citigroup (C), Salesforce (CRM) and Match Group (MTCH) first promised financial support to employees seeking abortions in affected states after a draft version of the opinion leaked in May. Many more followed suit on Friday. Some, including Bumble and Lyft, also previously said they would donate to organizations that support women’s rights, such as Planned Parenthood and Fund Texas Choice.
Corporate America is increasingly being drawn from the political sidelines on the abortion issue in response to pressure from investors, customers and employees. Companies are also struggling to attract and retain talent, and worry about the impact these states’ anti-abortion laws could have on their workers.

Here are some of the prominent companies offering expanded assistance to staff in states curtailing abortion care.

Microsoft (MSFT) extended its financial support for “critical healthcare,” including abortions and gender-affirming care, to include coverage for travel expenses for such services, after the draft opinion overturning Roe was first leaked.

The company’s existing benefits package allows employees to travel out of state for medical care if it is unavailable in their home state, according to an Apple (AAPL) spokesperson.

The tech giant intends to offer travel expense reimbursement “to the extent permitted by law” for employees seeking out-of-state health care and reproductive services, according to a spokesperson. “We are in the process of assessing how best to do so given the legal complexities involved,” the Meta (FB) spokesperson said in a statement.

Yelp’s existing healthcare plan for US employees pays for women, family members and partners to travel out of states with strict abortion laws, such as Texas and Oklahoma, which ban abortions after 6 weeks.

“This ruling puts women’s health in jeopardy, denies them their human rights, and threatens to dismantle the progress we’ve made toward gender equality in the workplaces since Roe,” Jeremy Stoppelman, co-founder of Yelp (YELP), said in a statement Friday. “Business leaders must step up to support the health and safety of their employees by speaking out against the wave of abortion bans that will be triggered as a result of this decision, and call on Congress to codify Roe into law.”

Disney (DIS) employees who are unable to access medical care in one location will be given affordable coverage to access the same care in another location, according to a company spokesperson. The benefit covers family planning and pregnancy-related decisions.

Uber’s US insurance plans already cover reproductive health benefits, including abortion and travel expenses to access healthcare. The rideshare company will also reimburse any drivers sued under state law for providing transportation to a clinic through the app, according to an Uber (UBER) spokesperson.

The streaming company offers travel reimbursement coverage for US full-time employees and their dependents who need to travel for healthcare treatments including abortions and gender-affirming care, a Netflix (NFLX) spokesperson told CNN. The company provides a lifetime allowance of $10,000 per employees (or their dependents) per service.

Bumble (BMBL), a female-driven dating app, said Friday that it will support its employees’ ability to access “the healthcare services they need,” including abortion care. A Bumble spokesperson added that the company will donate to the American Civil Liberties Union of Texas and Planned Parenthood Federation of America.

“Abortion is healthcare, and healthcare is a human right. We are deeply troubled by the Supreme Court decision,” the spokesperson said in a statement.

Dating app company Match Group (MTCH) in October established a partnership with Planned Parenthood Los Angeles to provide abortion access for its Texas employees and their dependents. The company is currently considering expanding that benefit to all its US staff, including remote employees in states with trigger laws that may soon ban abortions, according to a Match spokesperson. Match healthcare plans also help to cover travel and lodging costs for employees who need to travel to receive care, the spokesperson said.

The denim company said through The Levi Strauss Foundation that it is providing grants to the Center for Reproductive Rights, Afiya Center and ARC-Southeast which provides direct assistance to women and communities in need of care. The company previously said that under its benefits plan, employees can be reimbursed for travel expenses for services not available in their home state, including abortion. Part-time staff and others who aren’t included in the company’s benefits plan are also eligible for reimbursement, it said.

Comcast (CCZ) has an existing healthcare travel benefit for all employees that covers up to $4,000 per trip, up to three trips per year, with a maximum coverage cap of $10,000 per year. The amount paid out depends on the type of health care procedure, but abortion care is covered, according to the company.

Warner Brothers Discovery, which owns CNN, on Friday expanded healthcare benefits options to include expenses for employees and their covered family members who need to travel to access abortions and other reproductive care, according to a company spokesperson.

The media company said Friday it will reimburse travel and lodging for employees who need abortion, infertility or gender-reaffirming services and cannot obtain them locally. CEO Roger Lynch said in an internal memo the Supreme Court decision was a “crushing blow to reproductive rights” and said the most powerful way the company can respond is through its content and journalism.

JPMorgan (JPM) on Friday said that its health care benefits have long covered abortion care. And starting in July, abortion will be included in the company’s health care travel benefit that covers services that can only be obtained far from home, according to spokesperson Joseph Evangelisti.

The sportswear company said in a statement that it covers travel and lodging expenses in situations where healthcare services are not available close to home, according to a statement Nike (NKE) released Friday.

“No matter where our teammates are on their family planning journey — from contraception and abortion coverage, to pregnancy and family-building support through fertility, surrogacy and adoption benefits — we are here to support their decisions,” the statement reads.

The coffee company is providing employees enrolled in its healthcare plan a medical travel benefit to access an abortion, according to a public letter to employees by Sara Kelly, Starbucks (SBUX) acting executive vice president of partner resources.

“We all need to process this in our own way, and as you do, here is what I want you to know: no matter where you live, or what you believe, we will always ensure you have access to quality healthcare,” Kelly said in the letter.

For employees who live in a state that restricts abortion access, Dick’s will provide up to $4,000 in travel expense reimbursement to travel to the nearest location where care is legally available, the company said in a statement Friday. The benefit will be provided to any employee, spouse or dependent enrolled in its medical plan, along with one support person.

The grocer’s healthcare package includes travel benefits of up to $4,000 to facilitate access for reproductive healthcare services, including abortion and fertility treatments, according to a Kroger (KR) spokesperson.

Alaska Airlines said in a statement that it has always provided travel reimbursements for “certain medical procedures and treatments if they are not available where you live.”

“Today’s Supreme Court decision does not change that,” it said.

Goldman Sachs (FADXX) on Friday extended its healthcare travel reimbursement policies to include all medical procedures, treatments and evaluations, including abortion services, in areas where a provider is not available near to where its employees live, a benefit that will be effective July 1, according to an internal memo obtained by CNN.

Zillow (Z) said in a statement Friday that its health benefits cover a wide range of reproductive health services, including abortions. The company said that as of June 1, its health plan has been updated to include a reimbursement of up to $7,500 “each time significant travel is necessary to access health care, including reproductive services.”