Russia tells Ukraine to lay down arms in Sievierodonetsk battle 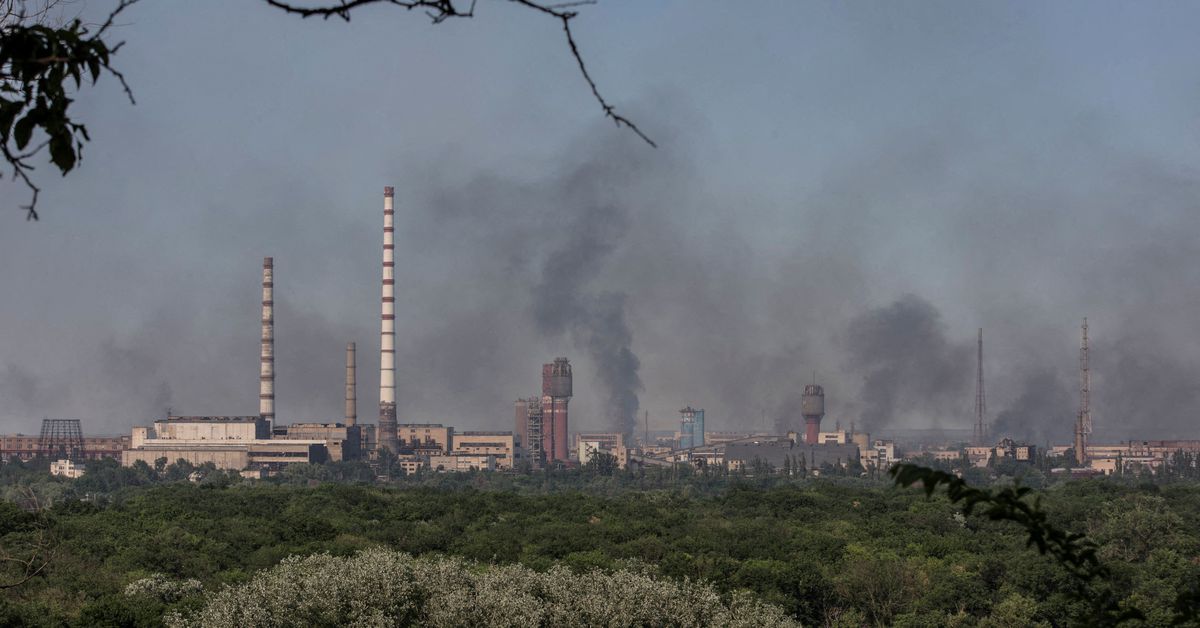 KYIV, June 15 (Reuters) – Russia told Ukrainian forces holed up in a chemical plant in the embattled city of Sievierodonetsk to lay down their arms by early Wednesday, pressing its advantage in the battle for control of eastern Ukraine.

Ukraine is calling for an increase in Western heavy weapons after Russia committed the bulk of its firepower to the eastern Donbas region, a topic expected to feature prominently at a meeting of NATO defence ministers on Wednesday in Brussels.

Ukraine says more than 500 civilians are trapped alongside soldiers inside the Azot chemical factory where its forces have resisted weeks of Russian bombardment and assaults that have reduced much of Sievierodonetsk to ruins.

Civilians would be let out through a humanitarian corridor, Mizintsev said.

The Azot bombardment echoes the earlier siege of the Azovstal steelworks in the southern port of Mariupol, where hundreds of fighters and civilians took shelter from Russian shelling. Those inside surrendered in mid-May and were taken into Russian custody.

Shelling on Azot was so heavy that “people can no longer stand it in the shelters, their psychological state is on edge,” said regional governor Serhiy Gaidai of Luhansk, one of two eastern provinces Moscow claims on behalf of separatist proxies.

The Russian assault on Luhansk’s Sievierodonetsk – a city of barely more than 100,000 people before the war – is currently the focal point of what has been called the battle of the Donbas.

Kyiv has said 100-200 of its soldiers are killed each day, with hundreds more wounded.

Ukraine is still trying to evacuate civilians from Sievierodonetsk after Russian forces destroyed the last bridge across a river to the Ukrainian-held twin city of Lysychansk.

Russian forces have shelled Lysychansk, which lies on higher ground on the western bank of the Siverskyi Donets river.

Ground has changed hands several times over the past few weeks, and Ukrainian officials have given little indication they will back down.

But with all the bridges leading from Sievierodonetsk now destroyed, Ukrainian forces risk being encircled.

“We have to hold strong … The more losses the enemy suffers, (the) less strength it will have to pursue its aggression,” Zelenskiy said in an address late Tuesday.

Russia gives no regular figures of its own losses but Western countries say they have been massive as President Vladimir Putin seeks to force Kyiv to cede full control of two provinces, Luhansk and Donetsk, collectively known as the Donbas.

Momentum in Sievierodonetsk has shifted several times over the past few weeks – with Russia concentrating its overwhelming artillery firepower on urban districts to obliterate resistance, then sending in ground troops vulnerable to counter-attacks.

Elsewhere in the Donbas, Ukraine says Russia plans to assault Sloviansk from the north and along a front near Bakhmut to the south.

In Donetsk province, critical infrastructure including homes, schools, hospitals and markets have been attacked over the past week, United Nations spokesman Stephane Dujarric told reporters in New York.

“This has made life nearly unbearable for people who are also facing severe water shortages, and at times are unable to leave their homes for days on end due to the fighting,” Dujarric said.

To the south, Ukraine’s military said it had conducted three air strikes against troop concentrations, fuel depots and military equipment in the Kherson region.

Ukrainian officials have renewed pleas for the United States and its allies to send more and better artillery as well as tanks, drones and other heavy weapons.

Western countries have promised NATO-standard weapons – including advanced U.S. rockets. But deploying them is taking time, and Ukraine will require consistent Western support to transition to new supplies and weapons systems as stocks dwindle of their Soviet-era weapons and munitions.

The meeting on Wednesday on the sidelines of a NATO defence ministerial is being led by U.S. Defense Secretary Lloyd Austin. It is the third time the group of nearly 50 countries are meeting to discuss and coordinate assistance to Ukraine.

Washington has committed about $4.6 billion in security assistance since Russia’s Feb. 24 invasion, including longer-range rocket systems, drones and advanced artillery.

But Zelenskiy said Ukraine does not have enough anti-missile systems to protect its cities, adding that “there can be no justification in delays in providing them.”

While Western sanctions have hit Russia’s economy hard, resulting global shortages of oil and grain have sent energy and commodity prices soaring. And a speech that Putin is set to deliver on Friday at the St Petersburg International Economic Forum will be closely watched. read more