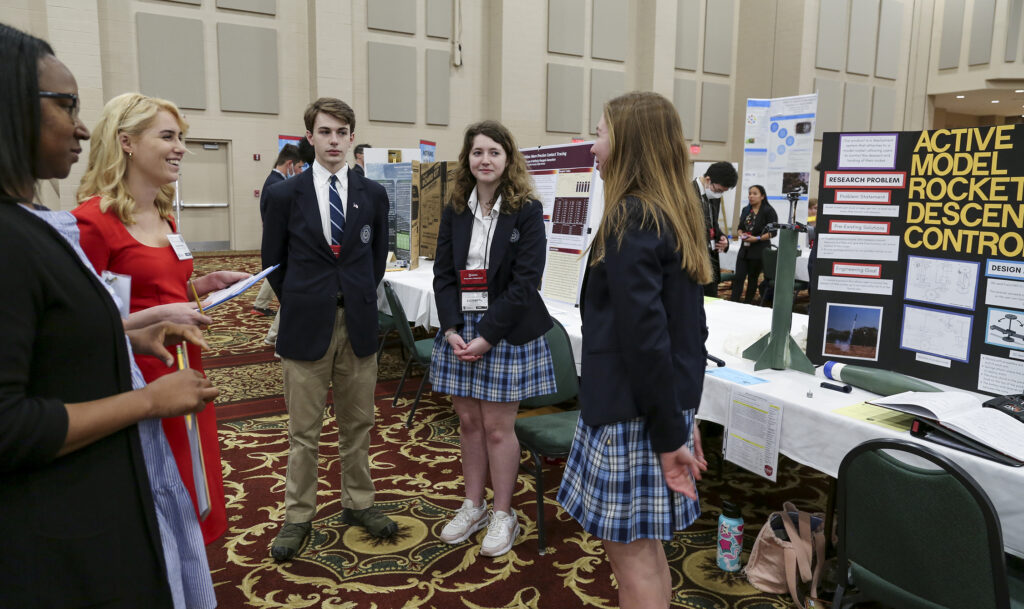 A trio of Atlanta high school students left this spring’s 74th annual Georgia Science and Engineering Fair, which is operated by the University of Georgia, with more than accolades and ribbons—they won a team of lawyers to help shepherd their invention through the patent process, which can take three to five years to complete.

Their invention, the Active Model Rocket Descent Controller, began as the students’ focus for “Problems in Engineering,” a course at the Atlanta Classical Academy. Students in the class were instructed to come up with a problem and create a solution, said Matthew Braun, a rising senior at the private high school.

Sophia Farinacci, from McIntosh High School in Fayette County, received an honorable mention in the GIPA Young Inventor’s Award competition for her project, Hugga: The Healing Heart Buddy. Hugga is a pillow designed to provide sternum support as well as comfort for children who have undergone open-heart surgery. Farinacci was born with a congenital heart defect and has had two open-heart surgeries. (Photo by Shannah Montgomery)

“The patent is a continuation of the goals of that class,” said Braun, whose teammates included fellow rising seniors Elizabeth Richter and Elizabeth Stinespring.

The students’ work earned them the Georgia Intellectual Property Alliance Young Inventor’s Award. It is facilitated by the GIPA as part of the fair’s Patent Assistance for STEM Students (PASS) initiative, designed to increase awareness and educational resources about intellectual property for young inventors and researchers in Georgia.

Retired engineer Michael Frnka started the initiative with Laura Brewer, a program coordinator at the UGA Center for Continuing Education & Hotel in 2019. Since then four winners have had their inventions submitted for patents.

Frnka began judging regional and later the statewide science and engineering fair after retiring from the U.S. Army at Fort McPherson, where he worked 40 years as a civilian engineer. During the 2017 Georgia Science and Engineering Fair one entry stood out to him—a device that monitored a person’s physical state. If the person became incapacitated, the device would call 911 and provide authorities with the person’s location and the physical problem.

Frnka immediately saw commercial implications for the device and encouraged the student to look into a patent.

“‘This is really valuable stuff. You and your dad probably ought to get a patent for it,’” Frnka told the young inventor. “And he said, ‘Well, Mr. Frnka. It was all we could do just to get this far.’ And it kind of broke my heart.”

Frnka met with Brewer, who oversees the fair for the Georgia Center, to discuss what could be done to help students pursue patents if they wanted to.

“We jumped at the chance [to be a sponsor],” said Curfman, the president of the Intellectual Property Law Section of the Georgia Bar Association.

“Nothing had ever been done like that, so it required a good bit of work and brainstorming of how to actually implement it,” said Curfman. “So each year we get better at it. Each year it gets more and more refined, and more and more interesting, and gets more and more notoriety, and it is a lot of fun.”

Today, the Young Inventor’s Award/PASS program utilizes several experienced volunteers, including patent attorneys who handle the patent application work and its costs, according to Frnka. Applicants are responsible for paying the $100 initial patent fee, but Frnka said they can seek help from Georgia Lawyers for the Arts, which launched a program to assist fledgling entrepreneurs and inventors.

To be considered for the Young Inventor’s Award, a project must meet certain criteria. It must be useful, new and non-obvious; it should also solve a problem and have commercial potential

Those characteristics make a project or invention more likely to receive patent approval.

For their class project, the rising seniors at Atlanta Classical Academy looked no further than their interest in model rockets. Braun is president and co-founder of the school’s rocketry club.

“We’ve lost a lot of rockets, many of them very far away in the trees,” Braun said. “It’s difficult to keep (rocketry club) members engaged if their rocket gets stuck in a tree.”

Their invention, the Active Model Rocket Descent Controller, is a device installed inside a model rocket that enables users to use a remote control to guide the rocket back toward the launch site as it descends under parachute. In their testing procedure, the students launched a control rocket to measure how far away from the launch site it would land. They then launched a rocket equipped with the device and successfully guided it to the target zone, which was significantly closer than the nearest control rocket landing point.

Three student projects were selected as finalists for the award and had to go through a “patentability” interview before they were ranked. The two alternate projects would be in line for the patent assistance if the winner chose not to pursue it.

Curfman said the rocket descent controller seemed like something for which there would be a good commercial market.

“It certainly seemed novel and non-obvious, at least at first point,” he said. “So we thought this is actually pretty close to a commercial product.”

Almost 400 students competed in the 2022 GSEF, winning 179 awards. Five of them advanced to the Regeneron International Science and Engineering Fair, joining 35 additional Georgia students who won regional fairs directly affiliated with ISEF. This year’s ISEF was held in Atlanta in May.

“The opportunity to work with IP attorneys shows our participants that they are already capable of doing patentable research,” Brewer said. “And it empowers them to take ownership of their ideas so they can continue to grow as young STEM scholars.”

The Georgia Science and Engineering Fair is Georgia’s premier forum for students to showcase their original research, compete for awards, and interact with top-level professional scientists.

The science fair system in Georgia serves not only to recognize students for their achievements, but also to prepare students to succeed and flourish in an increasingly complex and highly technical world by becoming problem solvers, critical thinkers, reflective learners, and more productive and influential members of their communities. GSEF is held annually in March or early April.

See all the winners from the 2022 GSEF at https://www.georgiacenter.uga.edu/sites/default/files/gsef-2022-announcement-awards.pdf