Meteor storm of 1,000 shooting stars per hour possible this week 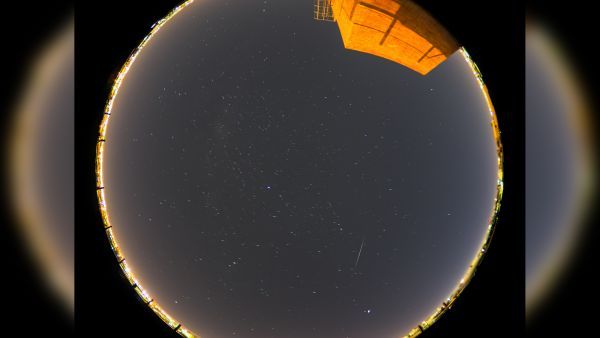 Ready to embrace some meteoric uncertainty?

The Tau Herculids meteor shower may light up the skies over North America on May 30 and 31. Or it may not. There’s a chance we might pass through the thickest part of the comet fragment that is creating the debris, in which case the night skies will be filled with shooting stars.

Related: The greatest meteor storms of all time
More: Potential meteor shower is ‘all or nothing event,’ NASA says

If the shower happens in the right way, it could lead to a spectacular “meteor storm,” in which Earth passes through an especially thick forest of space rocks, leading to up to 1,000 shooting stars per hour, according to the Washington Post (opens in new tab).

And as a bonus, the moon will be new and the radiant, or apparent direction of the shower, is in the high-up constellation of Hercules in the northern sky. This means there will be a minimum of natural light pollution to contend with when looking for shooting stars.

But the sky show is not a guarantee, NASA cautioned. If the comet that spawned the storm has debris traveling slower than 220 mph (321 kph), “then nothing will make it to Earth and there will be no meteors from this comet,” Bill Cooke, who leads NASA’s meteoroid environment office at Marshall Space Flight Center in Huntsville, Alabama, said in a recent agency blog post (opens in new tab).

Meteors are best visible around 2 a.m. local time, and for the best shot of seeing them, people should get as far away as possible from city lights. Wear comfortable clothing, arm against mosquitoes, and sit back in a lawn chair to look up. The best meteor streakers appear far away from the radiant.

The originating small solar system body for this shower is a comet, kind of like an icy snowball, known as 73P/Schwassmann-Wachmann (opens in new tab), or SW3 for short. The comet has been falling apart for a while and close to 70 pieces were observed as early as 2006, although NASA suspects more fragments are lurking in the solar system.

“If it makes it to us this year, the debris from SW3 will strike Earth’s atmosphere very slowly, traveling at just 10 miles [16 kilometers] per second,” the agency warned. Slower meteors tend to produce fainter trails in the sky, but we might get surprised.

Astrophotographers wanting to catch meteors should consult the beginner’s guide at  Space.com. But if you can’t catch any this time around, don’t worry as there are many other meteor showers every year. A usual great bet is the Perseids, which peak around mid-August.

Editor’s Note: If you snap an amazing photo of the tau Herculids meteor shower and would like to share it with Space.com’s readers, send your photo(s), comments, and your name and location to spacephotos@space.com.