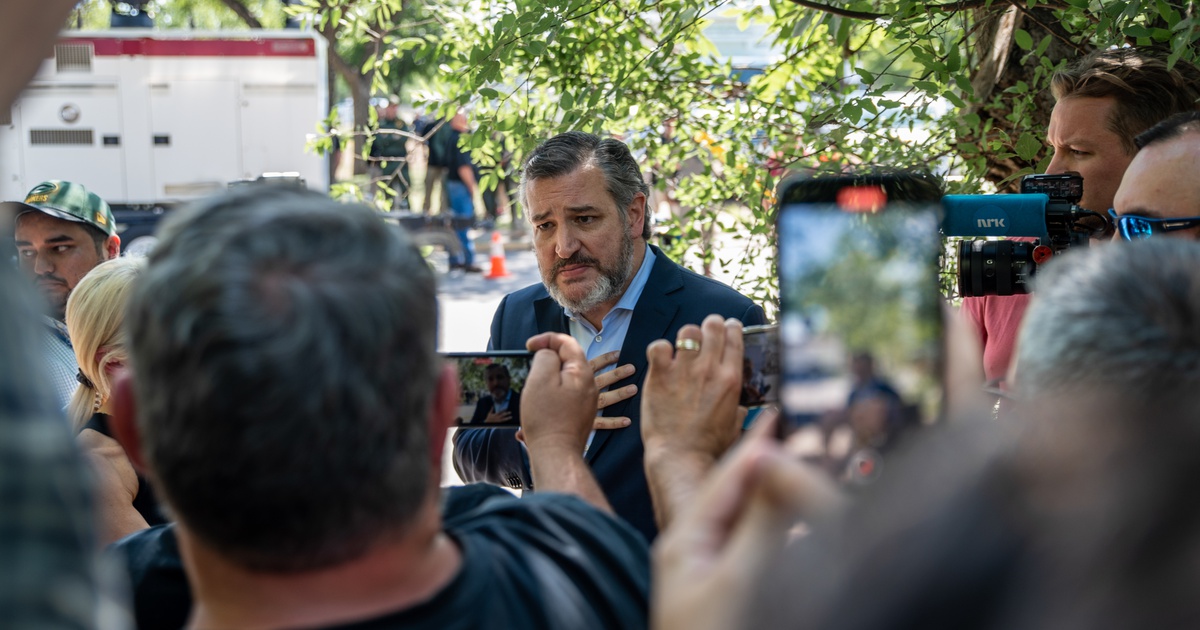 Sign up for The Brief, our daily newsletter that keeps readers up to speed on the most essential Texas news.

As people in Uvalde and across the country groped for solutions in response to the latest mass school shooting, Texas Republican officials pointed, again, to school doors.

“Have one door into and out of the school, and have … armed police officers at that door,” U.S. Sen. Ted Cruz said on Fox News the day after a gunman killed 19 elementary school students and two teachers.

On Tuesday, an 18-year-old armed with an assault rifle entered Robb Elementary School through a back door and opened fire on fourth grade students and teachers, according to state officials. The director of the Texas Department of Public Safety said Friday that the back door had been propped open by a teacher minutes before the shooting began.

Texas’ lieutenant governor has echoed the idea of locking all but one door of a school. And Cruz and former President Donald Trump repeated the call for single-entry schools at the National Rifle Association convention in Houston on Friday.

“We also know that there are best practices at federal buildings and courthouses, where for security reasons they limit the means of entry to one entrance,” Cruz said at the convention. “Schools, likewise, should have a single point of entry. Fire exits should only open out. At that single point of entry, we should have multiple armed police officers. Or if need be, military veterans trained to provide security and keep our children safe.”

But limiting schools to one access point is not a proposal grounded in reality, according to several school and safety experts.

Many schools have thousands of children, teachers and staff who could take hours to funnel in and out of a single entrance every day. Even more use portable buildings or have multiple buildings, with children and staff often moving among them. Not to mention that renovations to older schools, which officials say typically have more exterior entrances, put a heavy burden on local taxpayers.

“It is not feasible to think we’re going to ever get to the point where we have one door in and one door out,” said Bill Avera, chief of police and emergency manager for the Jacksonville Independent School District in East Texas and a board member of the Texas School Safety Center.

And while many districts sought to increase school security in the aftermath of Texas’ last mass school shooting in Santa Fe in 2018, teachers’ advocates and school officials fault state leaders for focusing on further “hardening” schools after the Uvalde shooting.

After the Santa Fe High School shooting, Lt. Gov. Dan Patrick also blamed school infrastructure, saying there were “too many entrances and too many exits to our more than 8,000 campuses in Texas.”

On Friday, Cruz said it was maddening that “the shooter in Uvalde got in the exact same way the Santa Fe shooter did. He walked through an unlocked back door into an open classroom.” He called for “serious funding” to install bulletproof doors and locking classroom doors.

Architects already try to limit entryways and design schools to guide students and visitors to one main front entrance, but more than one door is necessary for fire safety and to carry out school operations, said Bill Bradley, a school design expert with Stantec Architecture and chair of the Association for Learning Environments.

A school, for example, may need additional entrances to use a school gymnasium for sports, community events or voting booths without opening up the entire school to the public, Bradley said.

“Let’s say you had a high school that had 3,000 students, and you’re going to use one entry point to bring those students into that building every day,” Avera said. “That’s going to literally double the amount of time it takes to get folks in that building.”

Schools also have to account for staff and deliveries for things like lunch items and classroom materials, Avera said.

At San Antonio’s Northside ISD, district leaders had to add gyms in exterior buildings to elementary schools initially built without them, said Woods, the superintendent. He estimated about half of the district’s 125 campuses also use portables to avoid cramping in students or to deal with population growth.

To increase safety, school districts can arm school entrances with access-control technology that automatically locks doors from the outside and requires key cards. In the Jacksonville school district, Avera can remotely lock the district’s exterior doors from his phone, but it’s an expensive investment.

“You’re talking about anywhere from $700 to $1,000, $1,500 a door to outfit them,” he said, noting the technology also requires a robust internet and cable network. “So you could see it could get to be very expensive very quickly.”

Secured entryways should still allow individuals to leave a school in situations such as fire, Avera said.

Today, school officials are increasingly paying to build or retrofit schools to require visitors to go through two entrances or a front office, where people are often screened.

In Northside, Woods said, the district added “ballistic security lobbies” at its elementary schools without a full-time district police officer. He said the district has slowly sought to rebuild or renovate older schools, which typically have more exterior doors because classrooms often needed to prop doors open for air flow when schools lacked air conditioning.

“Of course they lived in a very different security environment at that time,” he said.

But building renovations and security upgrades cost much more than the money the district got from the state funds parceled out after the Santa Fe shooting, he said. Luckily, he said, his community has regularly approved local bond measures to make schools more secure.

“That would not be a true statement everywhere,” he added.

Indoors, some experts recommend locking classroom doors, but it can be a tedious requirement when students have to go to the restroom or leave for other activities.

“It’s hard to have a hard fast rule about locking doors,” Avera said. “It is best practice and it’s highly recommended, but there are a lot of circumstances, again, that you can’t always plan for that might cause a need not to have the door locked.”

School leaders can’t only focus on making schools impenetrable fortresses, Bradley said. Studies have shown that school environments and access to natural light can impact learning outcomes, he said, and creating visibility within schools can help staff identify threats from a distance.

“These are still schools, and we want them to be exciting and inviting for students,” he said.

The focus on the “physical engineering” of schools also will not address the more common gun violence that affects children outside of schools, said Jagdish Khubchandani, a professor of public health at New Mexico State University who has studied school violence.

“We’re just not going to the foundation of the issue. We’re just planting a Band-Aid solution,” he said.

Andrew Zhang contributed to this report.