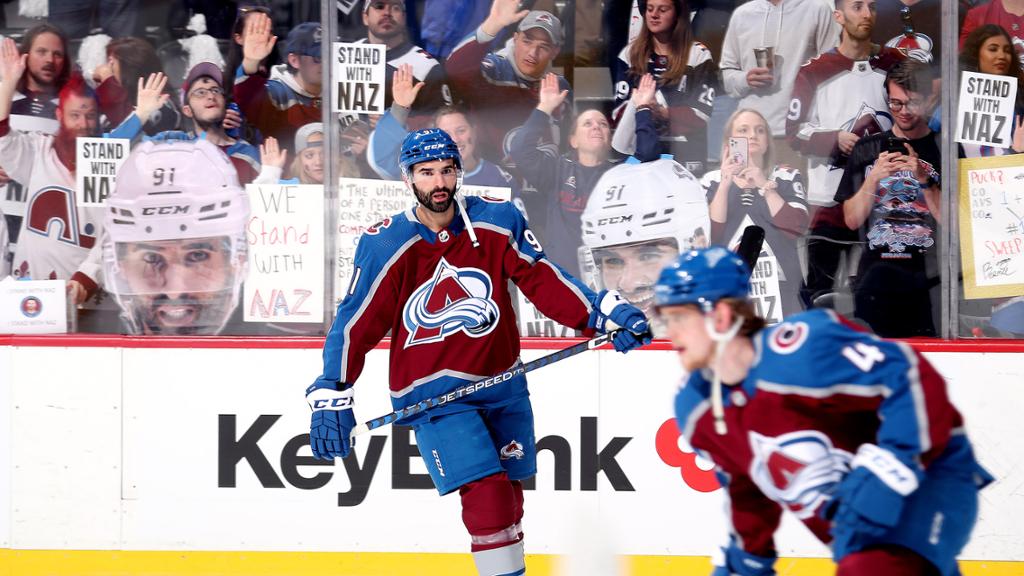 DENVER — Adrienne Ruth wanted to let Nazem Kadri know she and all Colorado Avalanche fans had his back and decided to do something about it.

Ruth, an Avalanche season ticket holder, painted a sign with a personal message for the forward, and printed up 300 flyers at her local Office Depot saying “Stand With Naz” for Game 5 against the St. Louis Blues at Ball Arena on Wednesday.

The signs were placed on seats before the game, and fans held them during the 5-4 overtime loss. They were Ruth’s response to taunts and threats directed at Kadri after Game 3 of the series in St. Louis on Saturday.

In that game, Blues goalie Jordan Binnington sustained a lower-body injury at 6:45 of the first period after being knocked over by teammate Calle Rosen and Kadri, who was skating hard for a rebound.

“After everything that happened before Game 4, I was upset,” Ruth told NHL.com on Thursday. “I usually have a sign for Naz for most games, so I knew I was going to have something [for Game 5], and I had a few people in the Avs community reach out and ask, ‘Do you have any ideas?'”

“We take threats made to any of our players or other club personnel seriously,” NHL Deputy Commissioner Bill Daly told Darren Dreger of TSN on Monday. “We are in touch with the St. Louis Police Department and they are employing enhanced security procedures both at the arena and in the hotel.”

Ruth, who also makes and sells Avalanche-related goods through Etsy, said Kadri’s wife, Ashley, reached out to her thanking her for her support.

“I’ve gotten to know her. I told her, ‘I’m planning on doing this, just so you know,'” Ruth said. “She said it was awesome to see.”

Ruth said the overall response has been “phenomenally positive.”

“To quote Naz, for those who hate, there are still going to be haters. There are still going to be those who disagree with it, don’t understand it or try to make it about something else but that’s pretty small voiced,” she said. “I’ll say even with the devastating loss (in Game 5) I woke up with a pretty full heart. Our news cycle is full of the bad. It’s nice to see the goodness making the news cycle.”