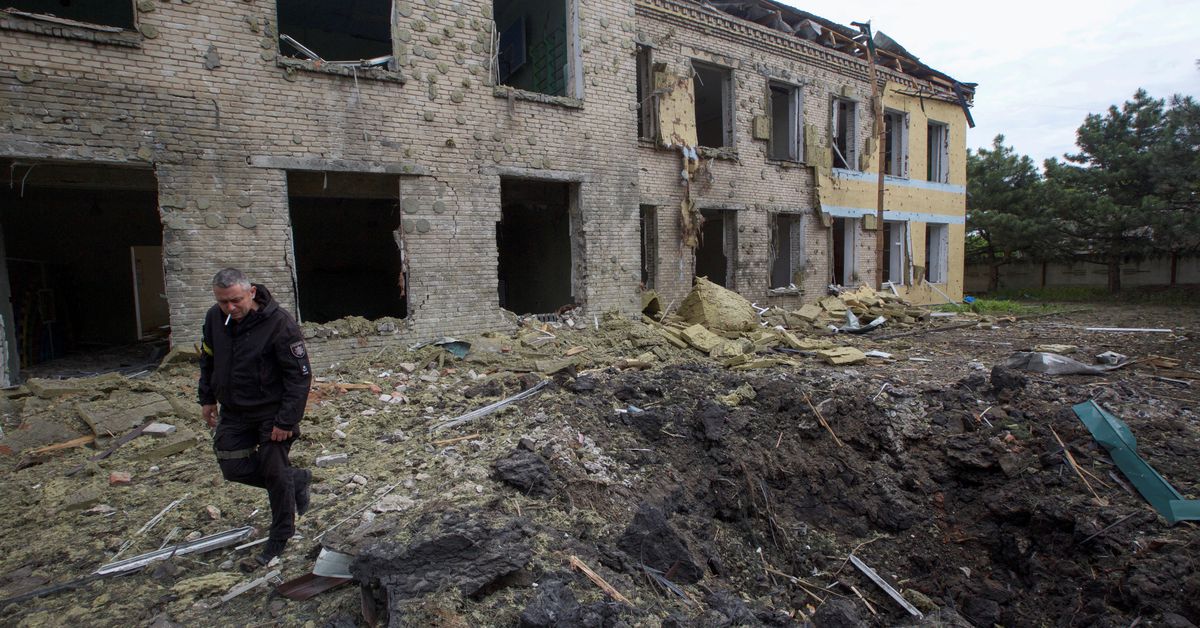 KYIV/SVITLODARSK, Ukraine, May 26 (Reuters) – Advancing Russian forces came closer to surrounding Ukrainian troops in the east, briefly seizing positions on the last highway out of a crucial pair of Ukrainian-held cities before being beaten back, a Ukrainian official said on Thursday.

Russia has poured thousands of troops into its assault in the eastern Donbas region, attacking from three sides in an attempt to encircle Ukrainian forces in Sievierodonetsk and Lysychansk. The cities’ fall would bring nearly the whole of Luhansk province under Russian control, a key Kremlin war aim.

Serhiy Gaidai, governor of Luhansk province, acknowledged that Ukrainian forces were retreating, but said the last road out of Lysychansk and Sievierodonetsk, which straddle the Siversky Donets river, remained outside Russian control.

In an interview posted on social media, Gaidai said “around 50” Russian soldiers had reached the highway linking Lysychansk to Ukrainian-held Bakhmut, and “managed to gain a foothold for some time. They even set up some kind of checkpoint there”.

“The checkpoint was broken, they were thrown back. That is to say, the Russian army does not control the route now, but they are shelling it,” he added.

“From the first day, the entire territory, all the positions of the military, have been shelled. Many of our fortified structures were destroyed,” Gaidai said. “It is clear that our boys are slowly retreating to more fortified positions – we need to hold back this horde.”

He hinted at further Ukrainian withdrawals, saying it was possible troops would leave “one settlement, maybe two. We need to win the war, not the battle”.

Western military analysts see the battle for the two cities as a potential turning point in the war, now that Russia has defined its principal objective as capturing the east.

The town is now under firm control of pro-Russian fighters, who have occupied the local government building and hung a red flag bearing the Soviet hammer and sickle at the door.

Drone footage filmed by Reuters journalists of the nearby abandoned battlefield showed scores of craters pockmarking a green field surrounded by wrecked buildings. Pro-Russian fighters were milling about in trenches.

Russia’s recent gains in the Donbas follow the surrender of Ukraine’s garrison in Mariupol last week, and suggest a shift in momentum on the battlefield after weeks in which Ukrainian forces had advanced near Kharkiv in the northeast.

A police officer walks next to a school building damaged by a Russian military strike, as Russia’s attack on Ukraine continues, in the settlement of Kostiantynivka, in Donetsk region, Ukraine May 22, 2022. Picture taken May 22, 2022. REUTERS/Anna Kudriavtseva

Russian troops have broken through Ukrainian lines at Popasna south of Sievierodonetsk and are threatening to encircle Ukrainian forces, he wrote.

“The extent to which this breakthrough at Popasna threatens Ukraine’s overall position depends on whether or not Russian forces gain momentum. That in turn hinges on force availability, reserves, and logistics to support this advance.”

Ukrainian interior ministry adviser Vadym Denisenko told a briefing the situation was very tense as 25 Russian battalions attempted to surround the Ukrainian forces. A full-strength battalion has around 800 troops.

“Everything now is focused on the Donbas.”

Three months into its invasion of Ukraine, Russia has abandoned its assault on the capital Kyiv and is trying to consolidate control of the industrial eastern Donbas region, where it has backed a separatist revolt since 2014.

The Russian advance has been backed by massive artillery bombardment. Ukraine’s armed forces said more than 40 towns in the region had been shelled in the past 24 hours, destroying or damaging 47 civilian sites, including 38 homes and a school.

Global attention this week has focused on Russia’s blockade of Ukraine’s Black Sea ports, which has halted exports from one of the world’s biggest suppliers of grain and cooking oil. The United Nations says the blockade could worsen global hunger.

Western countries have demanded Moscow lift the blockade. Russia says Western financial sanctions on Russia are to blame for the food crisis, although it has not explained how this is linked to its naval blockade of Ukrainian ports.

“We categorically do not accept these accusations. On the contrary, we blame Western countries for taking actions that have led to this,” Kremlin spokesperson Dmitry Peskov said in a conference call with reporters on Thursday.

Peskov said Moscow expects Ukraine to accept its demands at any future peace talks. It has demanded Kyiv accept Russian sovereignty over the Crimea peninsula Moscow seized in 2014 and recognise the independence of separatist-claimed territory.

Kyiv rejects those demands. In a speech to dignitaries in Davos, Switzerland, German Chancellor Olaf Scholz said Russian President Vladimir Putin must not be permitted to dictate the terms of any peace agreement.

“There will be no dictated peace,” Scholz said. “Ukraine will not accept this, and neither will we.”