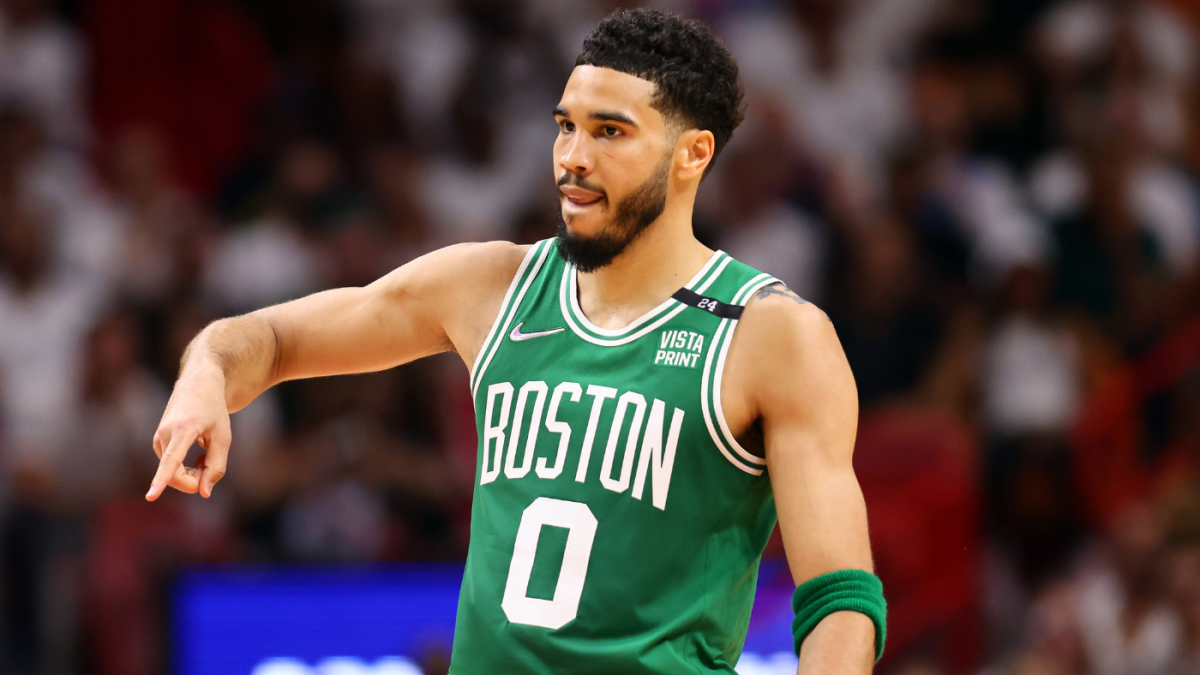 The Boston Celtics bounced back in a major way on Thursday night, as they cruised to a dominant 127-102 win over the Miami Heat in Game 2 of the Eastern Conference finals. The Celtics have now stolen home-court advantage and tied the series, 1-1. Game 3 is set for Saturday night back in Boston.

Early on it was all Heat, as they jumped out to a double-digit lead. That turned out to be the high-point of the night for them, however, as the Celtics flipped the game on its head, went on a 17-0 run and had a double-digit lead of their own by the end of the first quarter. They pulled away in the second quarter to take a 25-point lead into the break and the game was never in doubt again. Jayson Tatum led the way with 27 points, five rebounds and five assists, while Jaylen Brown went for 24 points and eight rebounds.

Marcus Smart, meanwhile, returned from a foot injury that kept him out of Game 1 to put up 24 points, nine rebounds, 12 assists and three steals. The Celtics had another great shooting performance, and went 20 of 40 from 3-point land.

Jimmy Butler led the Heat with 29 points and six rebounds, but he did not get much help. Gabe Vincent, who finished with 14 points, was the only other starter in double figures. The Heat also lost PJ Tucker to a knee contusion, and his status moving forward is unclear.

Here are some key takeaways from the game:

Smart shows out in return from foot injury

The Celtics were without both Marcus Smart (foot strain) and Al Horford (health and safety protocols) in Game 1, and they were sorely missed on both ends of the floor. In particular, the Celtics could have used their leadership and poise when the Heat went on their huge run in the third quarter on Tuesday night.

Both players were back in action in Game 2, however, and played big roles in the Celtics’ win. Horford was a perfect 4 of 4 from the field, and finished with 10 points, three rebounds and three assists. Smart, though, was the real difference maker. In one of his best performances this postseason, he went for 21 points, nine rebounds, 12 assists and three steals.

His defense, as always, was phenomenal, and his return made things much more difficult for the Heat.

“As always he sets the tone,” Celtics head coach Ime Udoka said. “Defensive Player of the Year for a reason. Ability to switch and switch onto bigger bodies. Just another good defender to throw at (Jimmy) Butler and (Bam) Adebayo and some of those guys, and not have to worry about them try to pick on certain matchups. He brings the physicality every night. Kinda gets everybody else in line.”

On the other end, his playmaking was on point, as he made the right read time and again and took a lot of pressure off of Jayson Tatum. Knocking down a team-high five 3-pointers certainly didn’t hurt, and as an exclamation point he made Max Strus fall with a little dribbling maneuver.

In Game 1 on Tuesday night, the Celtics were in front coming out of the halftime break, and appeared to have a chance to steal a win without some key players. Instead, the Heat went on a 22-2 run over five-plus minutes to flip control of the game, and pulled away for a double-digit win.

The reverse scenario played out on Thursday night — albeit much earlier in the game. Miami shot the ball extremely well in the first few minutes, and took control with an early double-digit lead. That advantage didn’t last long, The Celtics responded almost immediately with on a 17-0 run to seize control, built an 11-point lead at the end of the first and never trailed again.

C’s light it up from 3-point land again

The Celtics have had some huge 3-point performances during the playoffs. Most notably, they knocked down 22 3’s in their Game 7 win over the Milwaukee Bucks in the second round. They were right back at it on Thursday night, using another impressive shooting display to take down the Heat in Game 2.

Smart of all players led the way with five makes, while Tatum and Brown each knocked down four. All told, the Celtics went 20 of 40 from downtown for their most efficient 3-point showing of the playoffs. This was also their third playoff game with at least 20 made 3-pointers, which is tied for the most in a single postseason by one team.

While they shot the ball well all night long, the Celtics were especially hot to start the game. They went 9 of 11 from behind the arc in the first quarter, and hit five in a row during their game-changing 17-0 run. That kind of shooting performance is just demoralizing to the opposing team, and the Heat never recovered.

There was a lot of focus on the Celtics’ injury problems in Game 1, with both Smart and Horford unable to play. The Heat, though, have some trouble of their own in the health department. Veteran point guard Kyle Lowry is battling a hamstring problem, and hasn’t played since Game 4 against the Philadelphia 76ers in the second round.

Now, the Heat may also have to keep an eye on PJ Tucker. He left Game 2 with a knee contusion and did not play in the second half. Heat head coach Erik Spoelstra said that Tucker is adamant he’ll be ready for Game 3, but he will undergo further evaluation on Friday, including an MRI per Chris Haynes of Yahoo Sports.

Tucker, 37, is one of the toughest players in the league, so you would probably bet on him playing. Still, this is a concern for the Heat as he’s one of their most important defenders.

Share
Facebook
Twitter
Pinterest
WhatsApp
Previous articleMonkeypox: CDC monitors 6 people in US for possible rare infection, says public ‘should not be concerned’
Next articleRihanna and A$AP Rocky’s baby boy ‘has £1.2 BILLION’ – as they bypass Kylie Jenner and Travis Scott