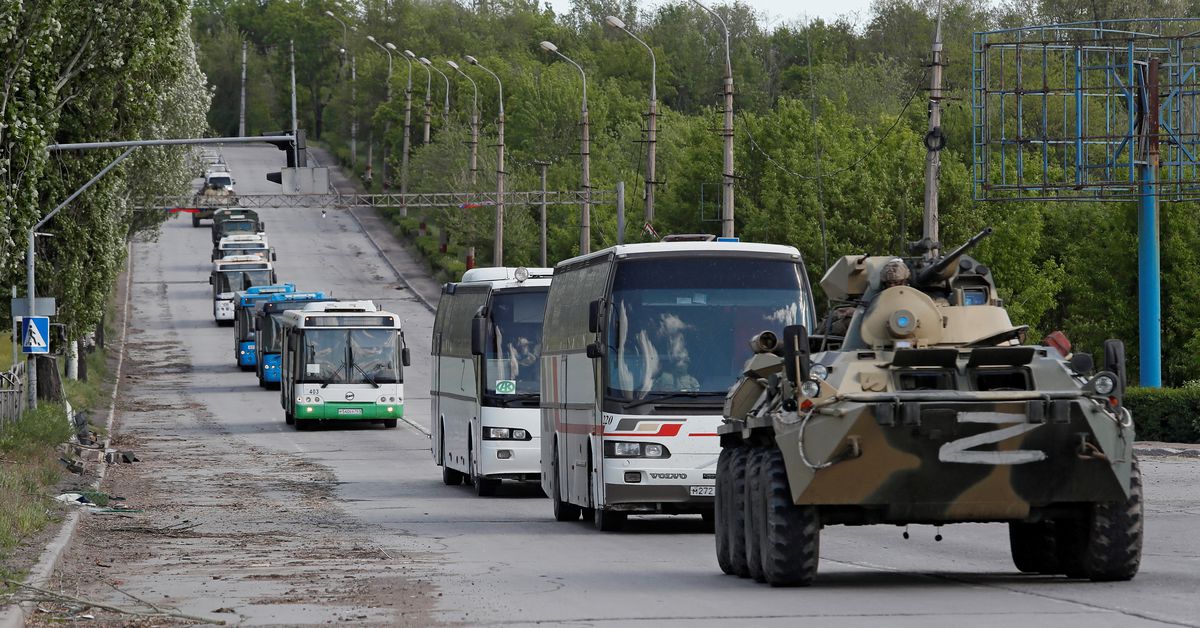 KYIV/MARIUPOL, Ukraine, May 19 (Reuters) – Moscow said nearly 700 more Ukrainian fighters had surrendered in Russian-held Mariupol as it shored up a key gain in the south, while the United States became the latest Western country to reopen its embassy in Kyiv.

Ukraine has ordered its garrison in Mariupol to stand down, but the ultimate outcome of Europe’s bloodiest battle for decades remains unresolved.

Top commanders of Ukrainian fighters who had made their last stand at the Azovstal steelworks in the port city are still inside the plant, according to the leader of pro-Russian separatists in control of the area, Denis Pushilin, quoted by local news agency DNA on Wednesday.

Ukrainian officials have declined to comment publicly on the fate of the fighters.

“The state is making utmost efforts to carry out the rescue of our service personnel,” military spokesman Oleksandr Motuzaynik told a news conference. “Any information to the public could endanger that process.”

Ukraine confirmed the surrender of more than 250 fighters on Tuesday but did not say how many more were inside.

Russia said on Wednesday an additional 694 more fighters had surrendered, bringing the total number to 959. Its defence ministry posted videos of what it said were Ukrainian fighters receiving hospital treatment after surrendering at Azovstal.

Mariupol is the biggest city Russia has captured so far and allows Russian President Vladimir Putin to claim a rare victory in the invasion it began on Feb. 24.

Moscow has focussed on the southeast in recent offensives after pulling away from Kyiv, where, in a further sign of normalisation, the United States said it had resumed operations at its embassy on Wednesday.

“The Ukrainian people … have defended their homeland in the face of Russia’s unconscionable invasion, and, as a result, the Stars and Stripes are flying over the Embassy once again,” U.S. Secretary of State Antony Blinken said.

A small number of diplomats would return initially to staff the mission but consular operations will not resume immediately, said embassy spokesperson Daniel Langenkamp. The U.S. Senate later approved veteran diplomat Bridget Brink as ambassador to Ukraine, filling a post that has been vacant for three years. read more

Canada, Britain and others have also recently resumed embassy operations.

Moscow says it is engaged in a “special military operation” to demilitarise and “denazify” its neighbour. The West and Kyiv call that a false pretext for invasion.

Finland and Sweden formally applied for NATO membership on Wednesday, a decision made in the wake of the Ukrainian invasion and the very kind of expansion that Putin cited as a reason for attacking Ukraine.

U.S. Ambassador to NATO Julianne Smith called for an expedited accession process that could be “done in a couple of months”, but NATO member Turkey said its approval depended on the return of “terrorists”, namely Kurdish militants and Fethullah Gulen followers.

Finland and Sweden were both militarily non-aligned throughout the Cold War.

Although Russia had threatened retaliation against the plans, Putin said on Monday their NATO membership would not be an issue unless the alliance sent more troops or weapons there.

The European Commission announced a 210 billion euro ($220 billion) plan for Europe to end its reliance on Russian oil, gas and coal by 2027. read more

Meanwhile, Google (GOOGL.O) became the latest big Western company to pull out of Russia, saying its local unit had filed for bankruptcy and was forced to shut operations after its bank accounts were seized. read more

On the battle front, Russian forces pressed on with their main offensive, trying to capture more territory in the eastern Donbas region which Moscow claims on behalf of separatists.

Ukrainian presidential adviser Oleksiy Arestovych said Ukrainian saboteurs had blown up the tracks ahead of an armoured train carrying Russian troops in the occupied southern city of Melitopol. read more

“The partisans got it, although they did not blow up the armoured train itself,” he said in a video posted on social media, contradicting an earlier statement from Ukraine’s territorial defence force that the train had been blown up.

The capture of Mariupol, the main port for the Donbas, has given Moscow full control of the Sea of Azov and an unbroken swathe of territory across Ukraine’s east and south.

The governor of the Luhansk region, part of the Donbas, said there had been a number of attacks there.

“Most of the shelling today was conducted in Severodonetsk and villages nearby… The Russians are still trying to cut the “road of life” through the centre of Luhansk region linking Lysychansk and Bakhmut,” Serhity Gaidai wrote on Telegram.

Reporting by Natalia Zinets and Max Hunder in Kyiv and a Reuters journalist in Mariupol; Additional reporting by Reuters bureaux; Writing by Costas Pitas and Stephen Coates; Editing by Rosalba O’Brien and Richard Pullin

Share
Facebook
Twitter
Pinterest
WhatsApp
Previous articleCathie Wood has a simple response to Tesla getting booted out of an S&P 500 ESG index: ‘Ridiculous’
Next articleMonkeypox: What to know about the virus detected in the United States

How Bungie’s Gjallarhorn Came to Life With NERF > News

Yordan Alvarez carted off after collision