Biden says Finland and Sweden have ‘full, total, complete backing’ of US as they seek to join NATO 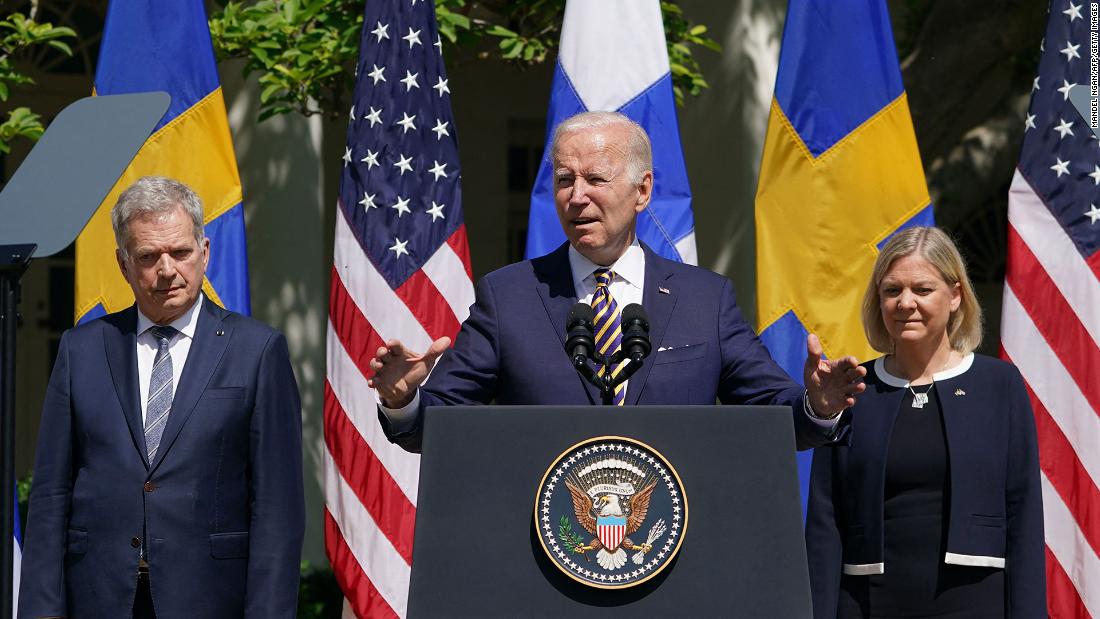 “Today, I am proud to welcome and offer the strong support of the United States for the applications of two great democracies and two close, highly capable partners to join the strongest, most powerful defensive alliance in the history of the world,” Biden said while standing alongside Finnish President Sauli Niinistö and Swedish Prime Minister Magdalena Andersson.

Sweden and Finland’s bids to join NATO come in response to Russia’s war on Ukraine, which sparked security concerns across the region. The historically neutral nations’ bids to join the alliance mark a dramatic evolution in European security and geopolitics, and the moves have been met with resistance from Russia and Turkey, a NATO member.

“Let me be clear: New members joining NATO is not a threat to any nation. It never has been. NATO’s purpose is to defend against aggression. That’s its purpose, to defend,” Biden said.

The President argued Russia’s war on Ukraine has made the military alliance “stronger” and “more united,” and said, “Today, there is no question, NATO is relevant. It is effective. And it is more needed now than ever.”

Biden said his administration was submitting reports on NATO accession for both Finland and Sweden so the Senate “can efficiently and quickly move on advising and consenting to the treaty.”

He said Finland and Sweden requesting to join NATO is a “victory for democracy in action,” and said both nations meet all the requirements to join the alliance.

Both Finland and Sweden already meet many of the requirements to be a NATO member, which include having a functioning democratic political system based on a market economy; treating minority populations fairly; committing to resolve conflicts peacefully; the ability and willingness to make a military contribution to NATO operations; and committing to democratic civil-military relations and institutions.

All 30 NATO members must give unanimous approval for a country to be accepted into the alliance.

“Having two new NATO members in the high north will enhance the security of our alliance and deepen our security cooperation across the board,” Biden said.

“Two nations with a long tradition of neutrality will be joining the world’s most powerful defensive alliance, and they will bring with them strong capabilities and a proven track record as security partners,” he said.

Russian President Vladimir Putin said on Monday that Finland and Sweden’s entry into NATO would not create a threat to Russia, but the “expansion of military infrastructure into this territory will certainly cause our response.” And the Russian Foreign Ministry said in a statement on Monday that Russia “will be forced to take retaliatory steps, both of a military-technical and other nature, in order to stop the threats to its national security arising in this regard.”

Turkish President Recep Tayyip Erdogan said this week that he would not approve Sweden and Finland’s membership if they sanction Turkey, and that delegations from the nations should not bother coming to Turkey to try to convince that nation to approve their country’s NATO membership.

Sullivan said on Wednesday that the White House is “confident” that the applications for membership to NATO will be approved, despite Turkey’s concerns.

Both Sweden and Finland are both engaged with Turkey regarding its concerns, as well as top US officials, he said.

Biden on Wednesday also seemed optimistic that Turkey would come around.

When asked how he will convince Turkey to support Finland and Sweden’s bids for membership, Biden told reporters, “The leaders of Finland and Sweden are coming to see me on Thursday. I think we’re gonna be OK.”

Thursday’s White House meeting with the two northern European leaders will took place just before Biden is expected to depart for a four-day trip to South Korea and Japan — his first trip to Asia as President.