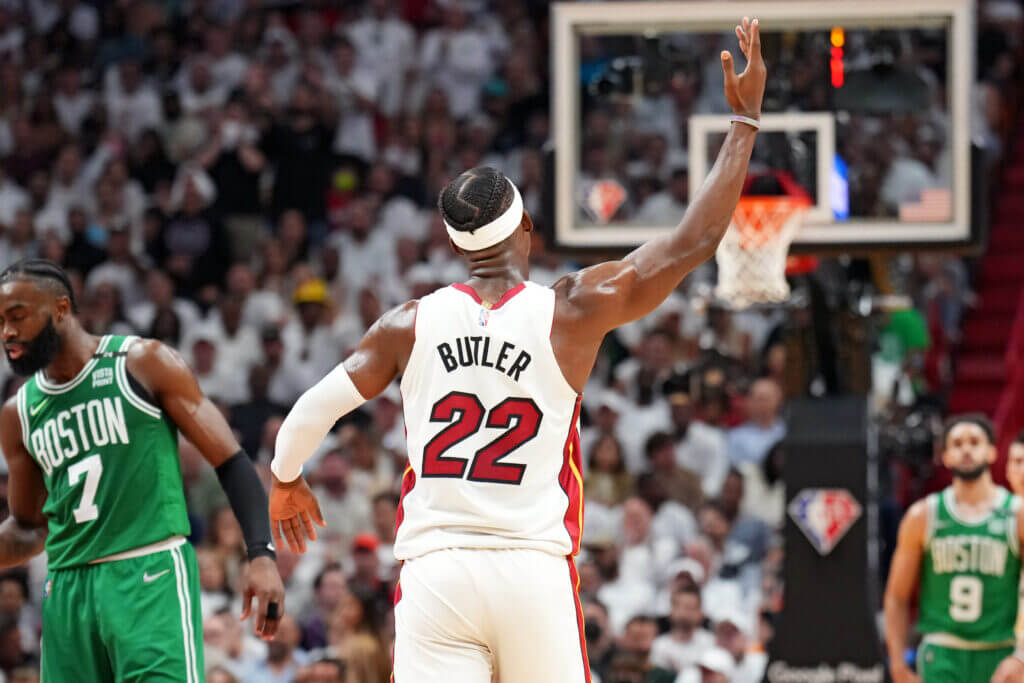 MIAMI — Twenty-nine thoughts for 29 points by Jayson Tatum in a Game 1 of the Eastern Conference finals that belonged solely to Jimmy Butler and the Miami Heat.

1. Sprained feet. Strained hamstrings. Heavy legs and rusty jumpers and emotional letdowns from a glorious weekend. And then, COVID — again.

2. For any number of reasons, one shouldn’t look too deeply into Game 1 to determine how the Eastern Conference finals are going to go. The Celtics finding out about three hours before tip that not only would Marcus Smart not play, but Al Horford, too, threw the biggest of wrenches into the gears of this series.

3. But we know about Jimmy.

4. “I want to run into people and see who falls down first, who is going to quit first,” said Butler, who is giving Luka Dončić a serious run for the title of best player of the 2022 playoffs.

6. The tone for an entire series can’t be set in one game, but Butler can — and did — show everyone else how involved he will be conducting business. He’s been screaming it from the crest of the palm trees down here all postseason.

7. Forty-one minutes. Forty-one points. A menacing, bruising 18 trips to the foul line, with 17 makes. Oh, and nine rebounds and four steals and three blocks in the Heat’s 118-107 victory, which you can read about here. Yes, Jimmy missed his two 3-point attempts. It couldn’t have mattered less. In what everyone expects to be a knock-down, drag-out series between two of the NBA’s best defensive teams, Butler showed his intention to seek contact, dictate pace and not be the one to fall.

8. “I think I speak for my teammates and the Miami Heat organization whenever I say I know what I’m capable of,” Butler said. “I don’t do this to score 40 points. I play the way that I play to win, by all means necessary, and it just so happened that I scored 40. But if I score 40 and lose, I’m going to be really pissed off.”

9. Number of playoff games in three seasons with the Heat in which Butler has scored at least 40 points: five.

10. Number of regular-season games in three seasons with the Heat in which Butler has scored at least 40 points: zero.

11. “I don’t want to get in a long dissertation about it,” Heat coach Erik Spoelstra said. “If you’re driven by competition and the stakes get raised, you’re going to raise your level of play. It’s not about trying to get bigger numbers. It’s about doing what’s required.”

12. Boston just pushed through an emotional, seven-game series against the defending-champion Milwaukee Bucks. Disregard the blowout in Game 7; that was a draining series. And it cost the Celtics Smart for at least Game 1 against the Heat because he sprained his foot during it. Smart was so sore on Tuesday that he was ruled out before he even arrived at the arena. He couldn’t even go out early to test it, which leaves me concerned about his availability in Game 2.

13. The Celtics could see that one coming. Horford, meanwhile, flew on the team plane to Miami. He stayed at the team hotel. He attended shootaround Tuesday. He laughed with and bro-hugged teammates and coaches. And then sometime late in the afternoon, boom, in the protocols.

15. Celtics coach Ime Udoka said Horford felt “fine” and said there was hope he could still play in Game 2. Those statements lead to a number of questions, including how did he land in the protocols in the first place? The hope is Horford will produce two negative tests by Thursday; otherwise, he could be out for Game 2 and possibly Game 3.

16. The Celtics traded for Derrick White and familiar face Daniel Theis at the February deadline. White already knew a bunch of the Celtics from his tour with Team USA through China in 2019. Smart, Tatum and Brown all were on that team. Theis, meanwhile, was a former Celtic mainstay whom they were able to bring back into the fold for frontcourt depth. Theoretically, their presence should have softened the blow of missing Smart and Horford. But Smart is the reigning Defensive Player of the Year. He would give the Celtics another highly capable body to throw at Butler, and his command of the offense is far superior to White’s. Horford does everything for the Celtics, as a scorer, screener, shot blocker and rebounder.

17. The Heat struggle against bigger teams, and in the first half Tuesday, even without Horford, the Celtics nearly set a record with 42 points in the paint. They finished the game with … 48 points in the paint. It’s a combination of missing their best interior scorer, but also, just being shoved around after halftime.

18. “We talked about it at halftime — they’re going to increase the physicality, and it was a little disappointing that we came out and got caught off guard as far as that,” Udoka said.

19. The Celtics’ nucleus of Tatum, Brown and Smart have been to four of the last six Eastern Conference finals. Horford played on three of those teams. You can argue whether Theis is a “nucleus” player, but he has been on all four conference finals teams out of Boston, too.

20. Tatum not only is the best player of the group, he also is an MVP-caliber player. He is long, athletic, can shoot from the outside, get to the rim, run the floor, etc. There isn’t anything he can’t do, really.

22. “Expect us to play better, expect myself to play a lot better,” Tatum said. He scored 29 points, but 21 came in the first half, and he committed six of his seven turnovers in a disastrous third quarter where the game totally turned. The Heat outscored Boston by 25 (39-14) in the period, tying the second-largest margin in a quarter of a postseason game in franchise history.

23. Robert Williams III missed the last four games for Boston with a knee injury and looked good in his return — until he didn’t. He notched 18 points and nine rebounds but was seen hobbling in the fourth quarter. Udoka called it a muscle cramp.

24. The Heat’s P.J. Tucker has been on the team’s injury report with a calf strain. He hobbled to the locker room in the second quarter, and it was unclear why. He returned for the start of the third and, with Butler, made life difficult for Tatum and Brown (15 of Brown’s 24 points came in the fourth quarter). Tucker later said he’d rolled his ankle.

25. “He inspires everybody,” Spoelstra said of Tucker. “And by the time that I had walked into the locker room, he looked at me dead in the eye and said, ‘Don’t even think about it, I’m playing in the second half.’”

26. The Heat had other heroes, such as Tyler Herro (18 points) and Gabe Vincent (17 points). There is no telling when Kyle Lowry will be back from that hamstring injury that’s kept him out seven of the last nine games. But Vincent continues to make it OK that Miami is without its champion, All-Star-caliber point guard.

27. Boston will get Smart and Horford back at some point before this series is over, perhaps before the games shift north for the weekend. The Celtics insisted it was one bad quarter that cost them, and perhaps that’s true. No series can be based on one game.

28. Butler’s one game, though, was pretty telling.