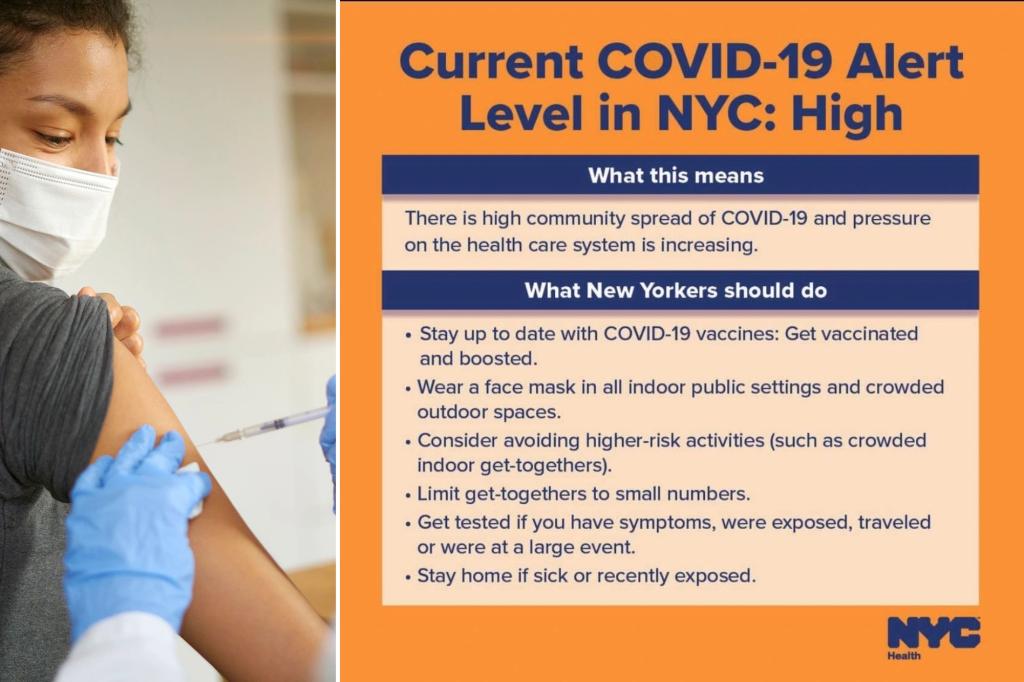 The new normal is now.

In what seemed like an instant, COVID-19 became an inevitable aspect of everyday life more than two years ago — with no signs to suggest that we’ll ever see otherwise again.

As we look at our lives ahead with waves of new variants and “stealth” sub-variants, and seasonal vaccine boosters to match, it begs the question: Should we fear reinfection?

Doctors have recently confirmed that those infected with an earlier Omicron variant, which first appeared and spread rapidly last summer, can indeed test positive again for the new sub-variant.

The Post spoke to NYU Langone Health infectious diseases expert Dr. Michael Phillips about what we can expect from life with COVID as we know it.

Can you get infected with COVID twice — and who’s at risk?

There is no such thing as perfect immunity from COVID. Regardless of severity or immunization, someone who tests positive for the virus can become infected again at some point.

“Our hospitalizations have crept up over the past several weeks, particularly with this newer variant of Omicron,” Dr. Phillips told The Post. “But thankfully, the vast majority of people [who] get the infection tend to recover without too much problems.”

But there’s more at stake for some. People who have not received two doses of the mRNA vaccine, as well as those with weakened immune systems due to age, medications, preexisting illness or other clinical factors, such as poor physical fitness, are at a higher risk of reinfection and becoming severely sick with COVID-19.

But Phillips warns against us “develop[ing] a laissez faire attitude about it.” While some relatively young, healthy and vaccinated individuals may become reinfected with only a mild case, the person they pass it to — potentially, someone with a weakened immune system due to age, medications, preexisting illness or other clinical factors, such as poor physical fitness — may not fare so well.

Omicron is “very, very different from prior waves of Delta,” Phillips added. “I think it shifted our game plan for sure.” Now more than ever the focus of prevention efforts is on protecting those the ones at a greater risk of severe illness — and protecting yourself from COVID reinfection means also “protect[ing] the vulnerable.”

Can you be reinfected with the same COVID variant?

It’s certainly possible, particularly in those who are not vaccinated. Unlike earlier variants, Omicron has rapidly evolved into several sub-types, prompting simultaneous localized outbreaks. Meanwhile, there’s no telling how many positive cases of COVID-19 go unreported, whether due to lack of testing or symptoms to warrant alarm. So whether to fear reinfection with the same niche strain may not be a pragmatic question to ask — because, by the time it’s answered, a new strain may already be here.

“There are so many of these other variants within that big family of coronaviruses, and we’re typically infected with three to four a year,” Phillips explained, most of which present as a mild cold.

Ideally, SARS-CoV-2 could fade into coronavirus obscurity like many of the others — but we aren’t there yet, and it’s too soon to say whether that’s a feasible outlook. “It’s still severe enough that that we have to be pretty mindful about,” said Phillips. “We just don’t know enough about future variants for us to take our guard down yet.”

How long after getting COVID can you be reinfected?

This is another complicated question — especially for sufferers of long COVID, who appear to harbor low, even undetectable levels of the virus for weeks and months. For mild to moderate cases, people who test positive for COVID can expect their infection to clear within five to 10 days after their symptoms arose, or since their confirmed test result.

Nascent research suggests that the average immune system can fend off COVID reinfection for three to five months after the previous bout. That’s why, according to the Centers for Disease Control and Prevention, people who had a confirmed infection within the previous 90 days are not expected to quarantine after coming in contact with another infected individual.

But all bets are off about six months later, when antibodies are known to start waning — regardless of vaccination.

How long do COVID antibodies last?

Experts don’t know exactly. While those survive COVID appear to be largely protected from repeat or severe illness for up to five months after the previous infection, there isn’t enough data available yet to be certain how long those COVID-specific antibodies linger, or even to confirm that the presence of antibodies guarantees immunity, according to the Food and Drug Administration.

Immune system B cells give rise to COVID-specific antibodies, designed to attack the virus on sight, before it can penetrate tissue cells and reproduce. They begin to form within the first few days infection or vaccination, and continue to build for several weeks until they peak at around three months thereafter — when your COVID defenses are at their strongest.

The good news is that waning antibodies doesn’t mean we’re totally defenseless, as some B cells will remember the tools it previously took to create COVID antibodies during re-invasion. (Boosters, furthermore, helps our immune system remember how. to fight.) Meanwhile, our killer T-cells, the immune system’s backup line of defense, may not so good at preventing the virus from entering the body, but they can spot an infected host cell — and destroy before it multiplies to another cell. And while they’re more difficult to track, they do appear to be more faithful than fleeting antibodies.

“Those appear to stay be much more robust,” said Phillips, adding, that “the T cell response is probably more important for response to viral infections” in the long run.

More or less. Vaccines remain the best way to build-up antibodies, the body’s primary line of defense against severe COVID-19 illness. While allowing oneself to become infected can also give rise to antibodies, it’s not worth the risk.

“I’m strongly pro vaccine, because of the the problems that happen when you don’t get it,” said Phillips, who hinted at alternative forms of vaccination technology on the horizon as well.

Regardless of type, antibodies are known to wane afer about six months since last infection or booster, making reinfection more likely to occur.

How often can you get a COVID booster?

For those on the two-dose regimen, a second round should be completed about six weeks after the first. However, it’s been well over a year since the vaccine was introduced, which means many patients completed those two rounds back in 2021.

Doctors expect that annually, even seasonally redesigned boosters against COVID-19 could become the norm — kind of like influenza, only different, and more troubling: One flu season sees just one or two major strains globally, allowing researchers time to prepare vaccines. “It’s not this, sort of, constant changing during a ‘season’,” said Phillips, like COVID-19 has done.

Currently, only those who have a weakened immune system and people age 50 or older are being recommended for a third shot by the CDC — which is, altogether, a good sign.

Said Phillips, “We don’t have to be paranoid about the emergence of a new strain … but we have to be thoughtful and ready for that.”

Scientists Are Testing a Universal Flu Vaccine In People

Antibodies From Llama Blood Can Protect Against COVID, Future Variants and Other Coronaviruses

How Bungie’s Gjallarhorn Came to Life With NERF > News