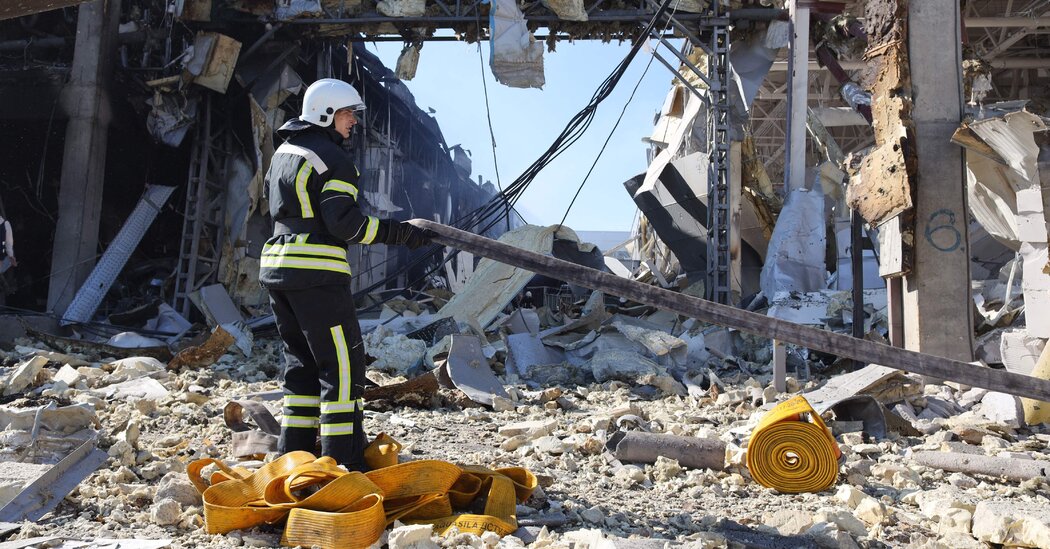 In a workshop in western Ukraine, a technician adjusted a metal bracket that had been attached to a racing drone so that it could carry a grenade, turning an aircraft sold in hobby stores into a lethal weapon.

Standing nearby were two American entrepreneurs, who had arrived at the workshop bearing gifts of a dozen other drones, a small installment in what has becoming a torrent of military aid to Ukraine. But this is not part of the state-sponsored arms shipments being raced into Ukraine to help the country fight a more powerful Russian army in the east.

Instead, the drones are part of a multifaceted, multimillion dollar crowdfunding campaign that is producing millions of dollars in donations, as well as a bounty of smaller weapons and other military equipment for the Ukrainian military. To drive donations, Ukrainian officials and private companies are making direct online appeals to sympathetic foreign citizens, even as they continue to press governments for heavier weaponry, too.

One of the American entrepreneurs, Chad Kapper, said his trip began with a call to a Ukrainian racing drone friend.

“I said ‘Listen, what do you guys need if you need anything? You know, can we supply parts or whatever?’” recalled Mr. Kapper, the founder of a racing drone company. “And he said ‘yes, whatever you can do’.”

For many of the donors involved, this conflict has unusual moral clarity.

“We made a mistake with Iraq, just like we made a mistake with Vietnam. We got ourselves into places we shouldn’t have been,” said the other American entrepreneur who brought the drones, a Tennessee businessman who asked to remain anonymous because of safety concerns. “These people are not asking us to show up, they’re just asking for our support. The least we can do is support them.”

Even as Ukraine receives major shipments of heavy weapons from the United States and other governments, the online campaign has tapped into widespread Western sympathy and produced meaningful donations for the country’s war effort. Included in the donations are dual-use items such as the hobby drones; military equipment such as night vision scopes; body armor, rifles and ammunition; and free lobbying services by American firms.

The biggest campaign, a social media appeal for donations by the Ukrainian embassy in Prague, raised almost $30 million from 100,000 donors less than three weeks after it was launched, including donations from around the world, according to Czech officials.

“We call on all to financially support the fund-raiser for immediate assistance in procurement of military equipment for the Ukrainian Army and citizen self-defense units,” the embassy said in February on its Facebook Page.

The Czech government, which also benefits from sales of its own weapons, said it would provide fast-track approval for the purchases.

Another Ukrainian site provides a list of groups seeking donations, including in cryptocurrency, for items including thermal imaging devices, drones and satellite phones.

With any crowdfunding campaign, there are concerns about swindlers, and Ukraine struggled with corruption before the war. But, as yet, there have been no reports of impropriety in the online efforts to bring in more weapons.

In perhaps the most audacious appeal, a Ukrainian company last month launched a government-approved appeal to crowdfund donations to buy a fighter jet.

‘Buy me a fighter jet. It will help me to protect my sky filled with Russian planes,’ a grizzled Ukrainian fighter pilot appealed in English.

The website explained that a MiG-29 or Su fighter jet could be obtained from one of several countries for much less than the $20 million cost of a new one.

“For this reason we address international companies, businessmen and all who can join the initiative,” the website read, adding jauntily: “Join! Teamwork makes the dream work!” A spokesman for the company said a week after the campaign began that they had raised about $140,000 and acknowledged the appeal was aimed at millionaires.

“I think it’s hard to believe that he could buy a fighter plane, that they could use it purposefully and get, you know, the right people in the right training,” said Simon Schlegel, senior Ukraine analyst for the Crisis Group think tank. “I think this is really something that is probably more of a marketing ploy.”

Stephen Flanagan, a senior political scientist at RAND Corporation who has served as a director of National Security Agency defense policy, said American public engagement in the war has put pressure on the U.S. government to do more for Ukraine and “has certainly broken down some of the initial hesitancy” by the U.S. government to provide lethal support to the Ukrainian military.

While sending weapons to Ukraine requires U.S. export licenses, the Commerce Department in March said it was speeding approvals for export of guns and ammunition being sent by Americans. Donations of dual use items such as hobby drones face few obstacles.

“For drone hobbyists to do anything with military equipment is practically impossible,” said Mr. Kapper, the founder of Rotor Riot. “The hobby stuff is unregulated in a certain sense so they can use as much as they can get,” said Mr. Kapper, who is a celebrity in the international racing drone world.

Mr. Kapper’s hobby drones — known as First Person View for the images streamed live to a pilot’s goggles, are at the opposite end of the spectrum from fighter planes. But they seem to fill a gap while Ukraine waits for more supplies of military-grade drones.

“They are calling me from different spots, from different battalions and they tell me ‘can you send more? We have run out,’” said a Ukrainian drone operator who asked to be identified only by his middle name, Oleksandr. For security reasons, he asked that the location of the drone hub not be identified.

Oleksandr said the drones brought by the Americans would be useful either in carrying explosives or for observing units of Russian fighters on the front lines.

The war’s narrative of a weaker country holding off a powerful aggressor and the specter of genocide in Europe has resonated widely with Americans and others around the world.

“You know, after sending money I just didn’t feel like I was doing enough,” said the Tennessee businessman. “I have resources and I have connections in this part of the world. And I knew I could make a difference by putting some things in process in helping with the supply of drones.”

The businessman, who said he had been contacted by the Ukrainian military for help, said he was setting up a charitable organization to allow people to donate to buy drones for Ukraine. Despite the later modifications to the drones, he said he felt the drone donations were for “humanitarian purposes.”

“There is nothing illegal,” he said. “They requested drones. What they do with them is entirely up to them.”

In addition to carrying grenades, the drones, which reach speeds of up to 70 miles per hour, are used by Ukrainian forces for forward observation of Russian units, artillery targeting and locating people in destroyed buildings or forests by using infrared cameras. Many of the hobby drones, costing $1,000 and up, have a short life.

“The enemy is hitting them so some of them live for just a day or two,” Oleksandr said. “But in that day or two they have important missions. We are protecting ourselves. We are not going across the border to Russian territory — we are on our homeland.”

In 2014, Ukrainian civilians responded to Russia’s invasion of Crimea by mobilizing to support an underequipped and unprepared army, laying the foundations for many of the grass-roots efforts in this war.

“It’s really quite striking how much this defense effort has roots in civil society,” said Mr. Schlegel from the Crisis Group. “There are little networks of people who can buy almost anything, short of heavy weaponry.”

“Social media has been very close to the front, it’s much closer than in most historical wars,” he said. “It’s the biggest land war in many people’s lifetimes and for many people it’s the first time to see tanks in action on that scale.”