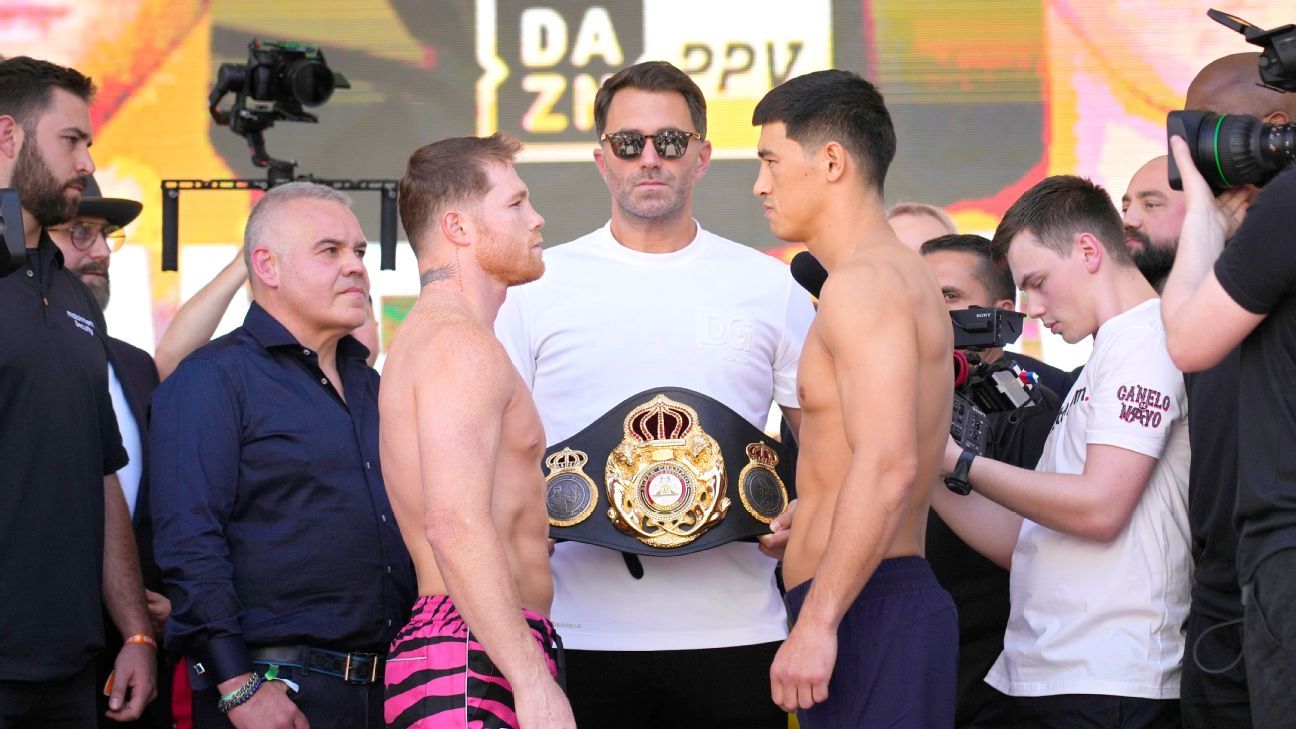 LAS VEGAS — Canelo Alvarez stood on the scale Friday outside T-Mobile Arena adorned by a wave of red-white-and-green flags as mariachis blared in full force.

For the first time in three years, Alvarez is set to compete in Las Vegas on Cinco de Mayo Weekend — the date and site typically reserved for boxing’s top star.

When Canelo defeated Daniel Jacobs here in May 2019, he retained his 160-pound championship via unanimous decision. Three years later, he weighed 174.4 pounds, the second-heaviest of his career, ahead of Saturday’s light heavyweight title challenge vs. Russia’s Dmitry Bivol (8 p.m. ET, DAZN pay-per-view).

Bivol, the champion and ESPN’s No. 2 light heavyweight, weighed 174.6 pounds.

The ceremonial weigh-in on Friday afternoon was preceded by the morning’s official weigh-in behind closed doors.

Alvarez (57-1-2, 39 KOs) will attempt to become a two-time light heavyweight champion following a November 2019 KO victory over Sergey Kovalev at 175 pounds. After that bout, Alvarez vacated his light heavyweight title to campaign at 168 pounds.

This time around, the 31-year-old Alvarez may keep the belt for a while. But if he beats Bivol, 31, his next fight is already set at 168 pounds: a defense of his undisputed super middleweight championship vs. Gennady Golovkin.

Golovkin and Alvarez have met twice already at 160 pounds — a 2017 draw and a 2018 majority-decision win for Alvarez.

Canelo, ESPN’s No. 1 pound-for-pound boxer, has expressed interest in a fight for the undisputed light heavyweight championship in 2023. A matchup with the winner of the June 18 three-belt unification between Artur Beterbiev and Joe Smith would accomplish the feat.

“I think I have enough experience and I have enough power, speed, boxing quality, to fight against the best,” Bivol said. “… I don’t think that I was avoided. Maybe not just interesting fight to make because I’m not known yet. I know it’s business. Fine. OK. No problem. But now I got the fight.”