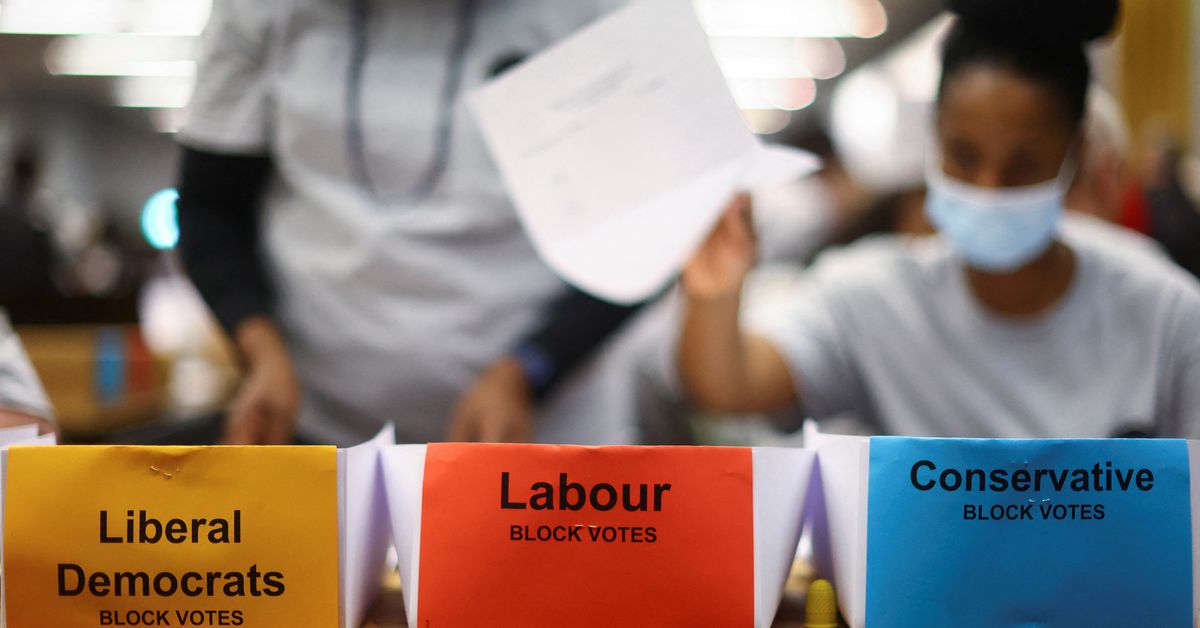 Johnson’s party was ousted in Wandsworth, a low-tax Conservative stronghold since 1978, part of a trend in the British capital where voters used the elections to express anger over a cost-of-living crisis and fines imposed on the prime minister for breaking his own COVID-19 lockdown rules.

For the first time, the opposition Labour Party won the council of Westminster, a district where most government institutions are located. The Conservatives also lost control of the borough of Barnet, which has been held by the party in all but two elections since 1964.

“Fantastic result, absolutely fantastic. Believe you me, this is a big turning point for us from the depths of 2019 general election,” Labour leader Keir Starmer told party supporters in London.

The overall tally due later on Friday will offer the most important snapshot of public opinion since Johnson won the Conservative Party’s biggest majority in more than 30 years in the 2019 national note.

The early results suggest while the Conservatives suffered in parts of its traditional southern heartlands, support for the party held up in areas of central and northern England that backed leaving the European Union in 2016.

The ballot is an electoral test for Johnson since he became the first British leader in living memory to have broken the law while in office. He was fined last month for attending a birthday gathering in his office in 2020, breaking social distancing rules then in place to curb COVID’s spread. read more

The loss of key councils in London, where the Conservatives were almost wiped out, will increase pressure on Johnson, who has been fighting for his political survival for months and faces the possibility of more police fines over his attendance at other lockdown-breaking gatherings.

The elections held on Thursday will decide almost 7,000 council seats, including all those in London, Scotland and Wales, and a third of the seats in most of the rest of England.

Johnson upended conventional British politics in the 2019 general election by winning and then promising to improve living standards in former industrial areas in central and northern England.

The loss of Wandsworth, Barnet and Westminster symbolises the way that Johnson, who won two terms as mayor of London, has lost his appeal in the capital. His support for Brexit has cost him support in London, where a majority of voters supported staying in the EU.

Outside the capital, the Conservatives lost overall control of councils in Southampton, Worcester and West Oxfordshire.

But the party has not done as badly as some polls had predicted. One poll in the run-up to the elections said the Conservatives could lose about 800 council seats.

John Curtice, a professor of politics at the University of Strathclyde, said early trends suggested the Conservatives were on course to lose about 250 seats. He said the results suggested Labour may not emerge as the largest party at the next election.

Oliver Dowden, the chairman of the Conservatives, said the party “had some difficult results”, but that Labour was not on course to win the next general election.

However, some local Conservative council leaders called on Johnson to resign after the party’s poor performance, which they blamed on him being fined and the cost-of-living crisis.

John Mallinson, Conservative leader of Carlisle city council, told the BBC that had found it “difficult to drag the debate back to local issues”.

“I just don’t feel people any longer have the confidence that the prime minister can be relied upon to tell the truth,” he said.

Simon Bosher, the most senior Conservative in Portsmouth, said the party’s leadership in Westminster needed to “take a good, long hard look in the mirror” to find out why they had lost seats.