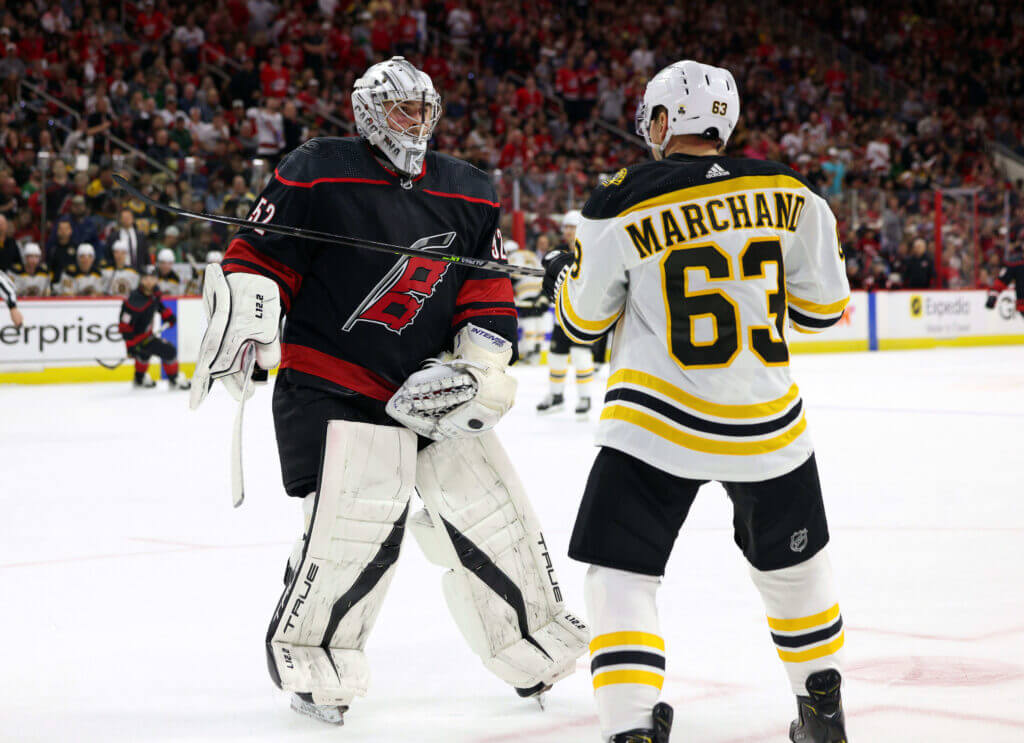 Home ice shifts in the 2022 Stanley Cup Playoffs on Friday with four Game 3s on the slate. The Carolina Hurricanes look to take a 3-0 series lead when they travel to Boston to take the Bruins. The other three series are tied at 1-1 after the losing teams on Monday each scored a decisive victory on Wednesday. Tampa Bay won its 15th straight playoff game after suffering a loss in the game before.

The Wild and Oilers both bounced back from Game 1 losses with blowout wins at home.

One thing to keep an eye on: Will scoring continue at this insane pace? In Wednesday’s games, the fewest goals scored were six goals and those were all scored by the Oilers in their 6-0 blowout win. Only the Flames-Stars game had fewer than six goals on Tuesday night.

Every day during the Stanley Cup Playoffs, The Athletic’s writers will make their picks, straight up. We put our picks, the TV schedule and all series coverage, plus the latest odds, all in one place for fans to easily digest and follow. Our in-depth NHL coverage is linked below the picks. For live NHL odds from BetMGM, click here.

Who was the guy? For the second straight night, we had a third-string goalie appear — as if by magic — and come up huge. Carolina’s Pyotr Kochetkov took over for Antti Raanta, injured in a sketchy collision with David Pastrnak, with 7:47 left in the first period. From there, he made 30 saves on 32 shots (0.86 goals saved above expected). Not bad for a 22-year-old who was playing in his fourth NHL game.

He also had a big, memorable moment, which we’ll talk about shortly. Without taking any credit from Kochetkov, this is what the Hurricanes do. Over the last two seasons alone, Alex Nedeljkovic, Petr Mrazek, James Reimer, Frederik Andersen, Raanta and now Kochetkov have all stepped in and had real success. Credit Rod Brind’Amour’s system, credit the goalies themselves, call it a combo — whichever you choose, it’s impressive.

Hurricanes worry meter (on a 1-5 scale with corresponding emojis): 🤠 … After the game, Brind’Amour was salty over his belief that the Bruins were targeting his goaltenders, given the incidents with Raanta and Kochetkov. Understandable. Other than that, everything is fine.

Bruins worry meter: 🤪🤪🤪🤪 … On top of all that other stuff, top-pair defenseman Hampus Lindholm isn’t doing well after a hard, clean hit by Andrei Svechnikov. Not a lot to like coming out of this one for the Bruins.

Who was the guy? If the Lightning want to have a chance in this series, they need Victor Hedman at his best. On the score sheet, there’s his first period goal plus three helpers. But his 5-on-5 play alone was a standout. With him on the ice, Tampa Bay created over 62 percent of the shot share, according to Natural Stat Trick, and when accounting for quality over 79 percent of the expected goal share. Hedman led all skaters in this game with a 5.89 game score.

What was the key? The Lightning actually made the Maple Leafs pay for their penalties this game. In Game 1, Toronto’s power kill was strong, taking the wind out of Tampa Bay who should have had the advantage in those situations. Last night, the back-to-back champions had seven opportunities and capitalized goals from Hedman, Nikita Kucherov, and Brayden Point.

The moment of the game: Brandon Hagel’s third period goal. By pulling ahead 4-1 early in the third, the Lightning appeared to do enough to separate themselves from the Maple Leafs — at least, in the moment. But Toronto’s one of the best teams at playing from behind, and they did their best to close the gap. That made Hagel’s score the game-winner. It was an important goal for that reason alone, and the fact that two key deadline acquisitions chipped in. First with Nick Paul’s blocked pass in the defensive zone and clear, then Hagel’s shot that ended up in the back of the net.

Maple Leafs Worry Meter: 😬😬😬… Something something, the Maple Leafs handling adversity in the playoffs.

Lightning Worry Meter: 😬😬😬… Tampa Bay did let this game get close in the third.

Who was the guy? Like the Minnesota Wild franchise itself, Joel Eriksson Ek is known more for being defensively stout than offensively electric. Eriksson Ek was fourth in the Selke Trophy voting last year and the Wild could have had an anthropomorphic Selke Trophy as their mascot for the last 20 years. But these aren’t your older sibling’s Wild. These Wild (this Wild? these Wilds? these Wildlings?) are fun as hell, and Eriksson Ek has emerged as an offensive force. Eriksson Ek had two goals and a primary assist in the first 21 minutes of Game 2, including a highlight-reel goal that we’ll get to in a moment. (He briefly had a hat trick and was feted with the usual cascade of millinery, but his third-period goal was overturned because Marcus Foligno was offside. Bummer for Kirill Kaprizov, who only got a smattering of hattering when he potted an empty-netter for his third goal of the game.)

Key stat: Blues goaltender Ville Husso stopped all 37 shots he faced in Game 1. The Wild scored on their first two shots in Game 2 (though it took half a period to finally put one on net), and Husso managed just 22 saves on 27 shots. Might we see Jordan Binnington in Game 3?

Who was the guy? Darnell Nurse stood out for the Oilers early, first saving a goal after a shot trickled past Mike Smith (we’ll get there) and then netting a shorthanded tally to go ahead 2-0 in the second period. Overall, at five-on-five according to Natural Stat Trick, the Oilers generated  71.7 percent of the shot share with him deployed, along with 68.3 percent of the expected goals share.

What was the key? The match up game was troublesome for Los Angeles to open this series, when Leon Draisaitl and Connor McDavid were on the ice with Phillip Danault and Anze Kopitar. Last night, it was less about ensuring they weren’t on the ice together — it was about outplaying them. The Oilers out-attempted the Kings 14-9 in the 10 minutes McDavid went up against Kopitar, and 9-5 in the 9:34 Draisaitl was on the ice with Danault. That’s important ahead of Los Angeles getting last change over the next two games at home.

Key stat: The Kings earned an xG total of 1.8 against the Oilers in Game 2. First, there’s the inability to finish, something that’s haunted them throughout the regular season with the worst 25.1 goals below expected at five-on-five in the league, according to Evolving-Hockey, plus another -15.4 on the power play. To their credit, they almost scored twice between the Azne Kopitar shot that trickled past smith and Alex Iafallo’s power play chance. So along with their finishing woes, there’s also the fact that they only mustered shots worth a collective value of 1.8 expected goals for. That has to change, or it’s going to be a short series.