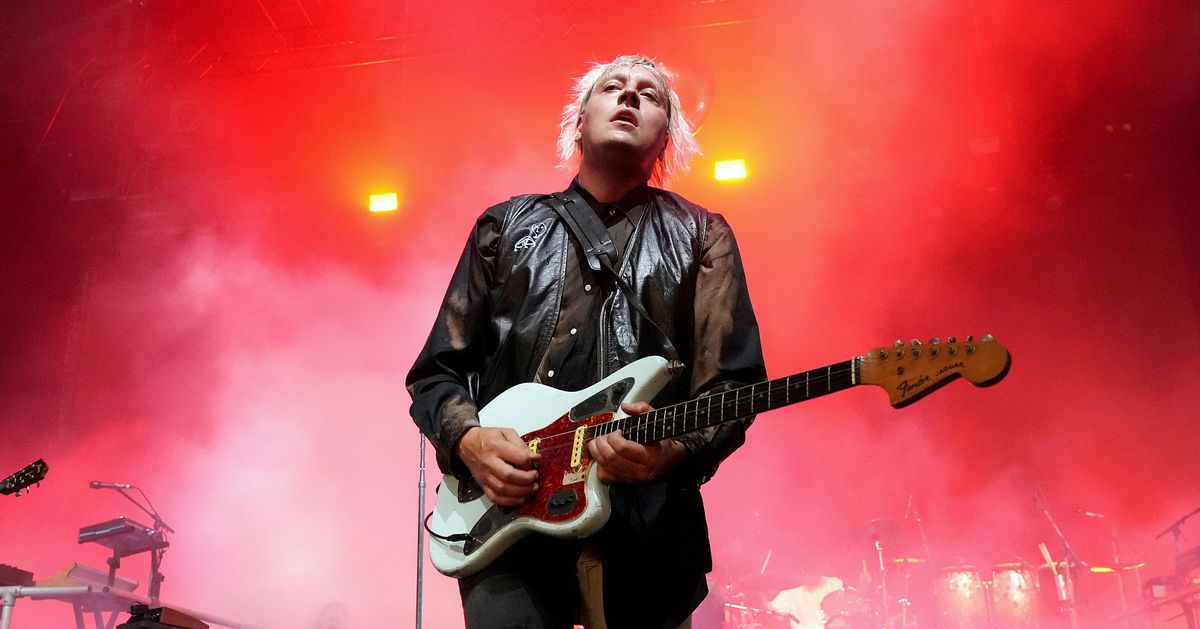 For years, Arcade Fire has tussled with what it means to be a big deal. Since cementing their reputation as one of the finest rock groups of the aughts, the Montreal collective has run far and fast from the sound of their classics — that bleeding-heart big-band racket that makes every live performance of Funeral’s “Wake Up” or The Suburbs’ “Ready to Start” crackle with the fervor and electricity of a tent revival and made Neon Bible’s bubbly “No Cars Go” feel like the emotional climax of a Pixar film. But 2013’s double album Reflektor, which leaned into dance and disco rhythms and faint Depeche Mode airs, felt almost confrontational in its disinterest in delivering anything that resembled earlier albums. 2017’s Everything Now ventured even further out as they called on Thomas Bangalter from Daft Punk and Geoff Barrow of Portishead to fine-tune cynical disco, synth-pop, and reggae experiments such as “Creature Comfort” and “Peter Pan.” The record also acted as a kind of performance-art piece about fractured attention spans and disaffected shitposters, heralded by a needlessly contentious rollout that saw the group plant false, satirical stories to make a point about misinformation and sensationalism but mostly just confused and annoyed people trying to follow the twists. Everything Now’s pivot to irony and dance music was Arcade Fire’s first real failure, tabling the band’s most endearing qualities: the gale-force intensity of the rockers and the disarming sincerity of the lyrics. But the moves they’ve made since then seem to suggest it was a learning experience.

You might mistake this for a story of a band letting the meteoric success of an acclaimed debut indie-rock album go to their heads, but Win Butler and Régine Chassagne, the husband-and-wife couple who sing lead, seemed like indie kids by sheer chance rather than principle or pedigree. In a lengthy 2016 talk with Red Bull Music Academy, Butler explained that Chassagne first discovered what indie rock was while reading the band’s reviews. She grew up loving Peter Gabriel; he was into the Cure and Depeche Mode. (Those folk and orchestral airs might just run in the family. Win’s mother and grandfather were jazz musicians; his grandmother was a swing singer. Arcade Fire owes much of their dabbling in Caribbean music to Chassagne’s Haitian heritage.) They fell in with an indie-rock milieu via geographical circumstance. Butler got the idea to sign to Merge Records, the venerable North Carolina label founded by members of Superchunk, from an impactful Magnetic Fields gig. The way he sees it, he’s been honing the chops required to become an arena rocker all along. This tracks: You could slide “Neighborhood #3 (Power Out)” and “Rebellion (Lies)” into the Killers’s Hot Fuss without interrupting the sequencing. You don’t come up with “Keep the Car Running” or “The Well and the Lighthouse” unless you were profoundly affected by 1980s radio. Everything Now’s mistake, promotional theatrics aside, was trying on the sarcasm and polyrhythms populating the classic Talking Heads albums. Arcade Fire is not a band we look to for smirking distance and smoldering ennui. We want the shit that makes us cry. They seem aware of that now. Their new album, WE, feels like a calculated retrenchment, a heaping pile of everything you want from Arcade Fire: touchy-feely rock tunes, inspired sequencing, and melodramatic, inspirational lyrics, just like Funeral. It’s a smart reset. The material ought to crush on tour.

WE takes a more refined approach to the mind-set of the previous album. Where Everything Now spoke wryly to the lengths we go to in order to feel fulfilled and entertained, WE ponders the inner turbulence we experience in any time of swift upheaval and how to fight the loneliness that animates the fingers scrolling across the miles and miles of posts the band lampooned in “Infinite Content.” WE isn’t any less melodramatic in its execution, but it is much more personal. Taking a page from the album’s namesake, Russian author Yevgeny Zamyatin’s influential 1924 book about a totalitarian surveillance state, and David Bowie concept records such as The Man Who Sold the World and The Rise and Fall of Ziggy Stardust and the Spiders from Mars, “End of the Empire I–III” yearns for fulfillment in a dystopian landscape. California and New York have been destroyed, and we’re “standing at the end of the American empire,” but Butler is more worried about the security of a loved one than the prosperity of any city or country. “The Age of Anxiety” is a word about coping mechanisms — “Fight the fever with TV / In the age where nobody sleeps / And the pills do nothing for me / In the age of anxiety” — that feels like a lingering hangover from the previous album both in the effortless balance of rock and dance grooves and in the focus on the strange ways humans process tragedy.

The message is earnest and un-obtuse: We’re wounded, but love is the salve. Life would be great if we could just get over our hang-ups and differences. WE sells the sentiment so plainly that it may be the most romantic work in the entire Arcade Fire catalogue, from the apocalyptic “Hungry Heart” energy of “End of the Empire” to the commitment in the chorus of “The Lightning I” — “I won’t quit on you / Don’t quit on me” — to the intensity of the title track and closer, which is full of lines you could imagine lovers saying to each other as Mount Vesuvius rained molten death on Pompeii. There are places where the album lays it on a little thick, though. “End of the Empire IV (Sagittarius A)” is a superfluous coda that tries to balance religious allusions and references to social media, reaching for profundity but landing better as comedy as Chassagne croons “unsubscribe” while Butler muses about Dante’s Inferno. The same happens when “Unconditional I (Lookout Kid),” a dollop of encouraging life advice that carries the hint of fatherliness, morphs into “Unconditional II (Race & Religion).” The melodies in Chassagne’s verses bear a distracting resemblance to the 1985 Dire Straits and Sting hit “Money for Nothing,” and the chorus (“I’ll be your race and religion / You be my race and religion”) sounds underbaked, its Peter Gabriel backing vocal notwithstanding. Arcade Fire released the album’s best two-parter as the lead single; the transitions here rarely feel as thrilling as the unexpected leap from folk to punk across “The Lightning I” and “The Lightning II.” “Age of Anxiety II (Rabbit Hole)” feels like cool if inessential material on the back end of a hit single’s bloated extended mix. The muscular synth-rock attempted there was perfected by M83 many moons ago.

On the surface, WE is a return to form, a bookend to the band’s early work in its structure and its subject matter. But like a modern Saturday Night Live sketch, there is a moment when these songs begin to coast on a good idea that’s run its course. The “Lightning” singles do well because they hit hard and get gone. The other songs trend looser and longer, some winningly and others not so much. It’s great to hear this band behaving as if they have a universal truth of great importance to share with the world, treading into proggier waters and slapboxing with the titans of rock, making the most Beatles-y music of their career. (WE wears its influences too closely sometimes, though. “End of the Empire” is nuclear-grade classic-rock pastiche, a little like a Queen song and a Lennon song and a Neil Young song all at once, somehow.) They are playing to their strengths, literally overloading fans with songs about the power of love and the strength of family. The album is a little bloated, but it sounds exquisite. (Arcade Fire produces themselves, but Radiohead collaborator Nigel Godrich is a new ingredient in the mix this time around, and the result is fluffier than they tend to come across in their records.) It’s been a long time since Arcade Fire really seemed to want to be Arcade Fire. We should enjoy this while it lasts.