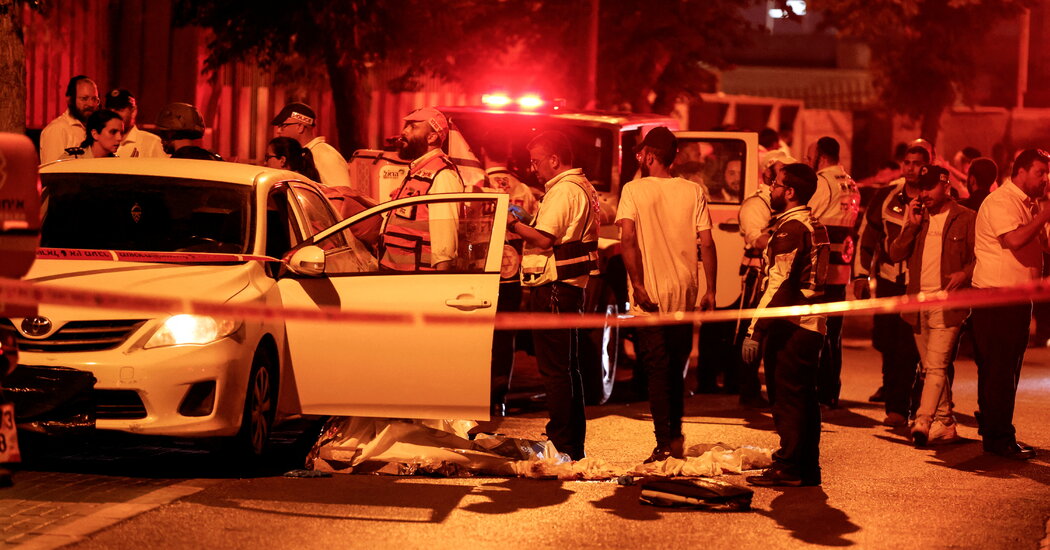 JERUSALEM — Two assailants, at least one of them armed with an ax, attacked passers-by in an Israeli town on Thursday night, killing at least three, according to initial reports from eyewitnesses, the police and emergency services.

The Israeli authorities described the assault, in which several other people were wounded, as a terrorist attack.

The attack followed a wave of violence by Arab assailants that had already killed 14 people in cities across Israel since late March, and came days after a Palestinian militant leader urged Arabs to “get your cleavers, axes or knives ready.”

Thursday’s attack also came after clashes between Palestinian stone throwers and Israeli police at the Aqsa Mosque compound in Jerusalem over the last few weeks. And it raised the specter that Israel had entered a new period of prolonged violence.

Despite worries of another clash at the mosque on Thursday, Israel’s Independence Day, it was relatively calm there although the Israeli police arrested one Palestinian protester. Nonetheless, the Palestinian Authority and Hamas issued strident statements decrying the police action.

On Saturday, Yehya Sinwar, the leader of Hamas in Gaza, had warned that any further raids by the Israeli police inside the mosque compound would prompt a response. In a fiery speech, he urged members of Israel’s Arab minority to “get your cleavers, axes or knives ready.”

The attack on Thursday took place in Elad, a predominantly ultra-Orthodox town in central Israel, just after nightfall.

Emergency responders said they found the first fatality by a traffic circle in Elad and two more in a nearby park.

“When we arrived we realized that this was a complex scene,” said Alon Rizkan, a paramedic with the Magen David Adom ambulance service. He described the three people who were pronounced dead at the scene as men, all aged around 40.

Several more wounded men were transferred to hospitals, and hospital officials said at least two were in critical condition with head injuries.

Hours later, the police said they were still investigating the circumstances of the attack, including how many suspects were involved. Details remained sketchy: Some witnesses reported seeing two assailants, both carrying axes. Others said one was armed with an ax and another with a knife.

The assailants appeared to have escaped. The police said they had set up checkpoints along several roads, and officers in a police helicopter were searching for a vehicle seen fleeing the scene. The minister of defense, Benny Gantz, said soldiers would assist in the hunt.

No one claimed responsibility for the attack on Thursday, but it was praised by a Hamas spokesman as “a brave and heroic act” and “a natural response to the violations of the occupation against the blessed Al Aqsa Mosque.”

The Aqsa Mosque compound is the holiest site in Jerusalem for both Muslims and Jews, who revere it as the Temple Mount, the site of two ancient Jewish temples.

Urged on by Hamas, the Islamic militant group that controls Gaza, protesters at the compound have tried to prevent visits by Israeli Jews during the hours set for non-Muslim visitors and tourists, and have thrown stones and fired fireworks at the security forces. The police have acted mainly to secure the visitors’ access, but the police actions, including using sponge-covered bullets, sound grenades and tear gas to disperse rioters, have fueled popular anger among Palestinians.

Palestinians view visits by ultranationalist Israelis to the compound, which have increased in recent years, as a provocation, and fear such visits are part of a gradual effort to undermine Muslim access to the site. The Israeli authorities say there has been no change in longstanding arrangements at the site.