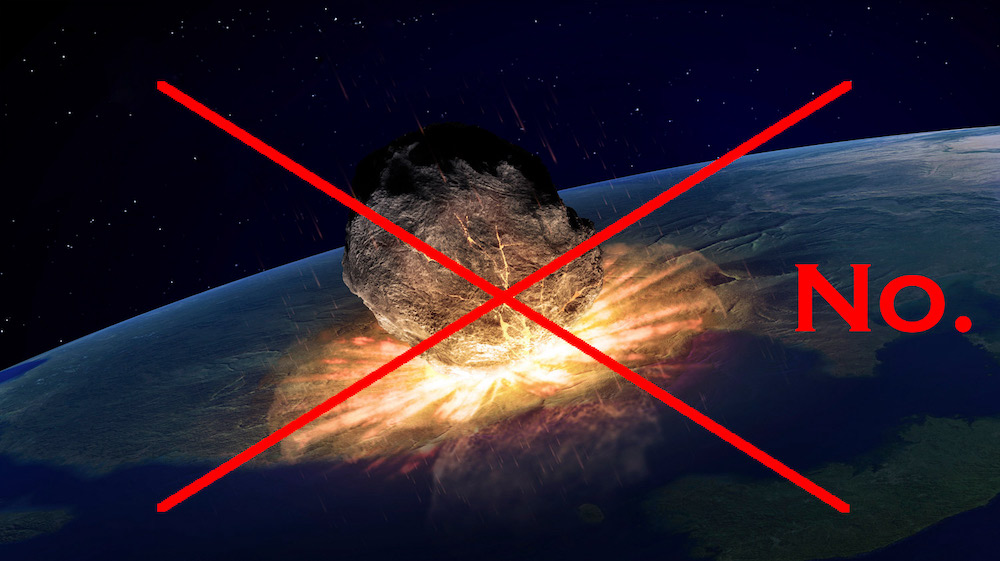 You might have if you listen to conspiracy-laden YouTube videos and “news” sites online that make breathless claims without being overly burdened with a predilection for accuracy.

To be clear: No, an asteroid the size of an Egyptian pyramid won’t hit the Earth on Friday. First of all, it’s not anywhere near that big, and second, it’s likely to miss us by tens of million kilometers.

Here’s the deal. On May 4, 2009 the Catalina Sky Survey’s telescope in Arizona — designed to scan large areas of the sky every night to look for near-Earth asteroids and comets — found an asteroid in its observations, now called 2009 JF1.

Asteroids appear as a dot moving from frame to frame as images are taken over the course of a night, and using its position versus time it’s possible to calculate the shape of its orbit. The initial calculations showed that 2009 JF1’s orbit came very close to Earth, within a mere 200,000 kilometers or so, less than half the distance to the Moon. That’s a cause for concern though not necessarily alarm; it’s difficult to get a very accurate orbital calculation over so short a time frame:

As I’ve written before, when an asteroid is first discovered, the orbit calculated for it is pretty fuzzy, because we don’t have a long enough arc to really be able to predict where it will be in the future. Small uncertainties in the position early on add up to big ones later. The analogy I like is if you’re an outfielder in a baseball game, and as soon as the batter hits the ball you close your eyes. Now, predict where the ball will be when it lands. Yeah, nope. But if you keep watching it you’ll be able to see its trajectory much better.

At the time, 2009 JF1 was very faint and was only able to be tracked for roughly 30 hours, not nearly enough to get a good grip on where it would be in the future. Still, extrapolating its motion showed that on May 6, 2022 there was a 1 in 4,000 chance it would hit Earth.

Think of it this way: That’s a 99.975% chance it would miss. Out of caution, as usual, astronomers knew the prediction was extremely rough but kept this rock in mind.

Not that they were particularly worried. Given the asteroid’s distance and brightness in those 2009 observations, they calculated it was small, probably 10 meters in size. That’s smaller than the asteroid that broke up over Russia in 2013, so clearly not anything that will cause an Earth-shattering kaboom.

Still, this was enough that the European Space Agency’s Near-Earth Object Coordination Center — which keeps track of such objects — put in on their risk list, and the nominal odds were high enough to keep it pretty high up on that list.

That was 13 years ago, and progress marches on. Over the years astronomers have developed software to better analyze asteroid orbits. Also, missions like Gaia have hugely improved our measurements of star positions, which are used as benchmarks for the asteroid orbit calculations. The original observational data were archived, so recently astronomers reanalyzed them using better software and stellar positions.

I’ll take that action. And because of this new work, the NEOCC took 2009 JF1 off its priority list.

The real situation is that the nominal, or statistically most likely, miss distance will be about 24 million kilometers ±15 million km or so. The date of closest approach will actually be May 15, plus/minus a day.

Now, if you search for the asteroid online you’ll find a ton of garbage sites about it. I see many saying NASA announced it will hit on May 6, but the weird thing is they never link to that claim. Funny, that. Another “NASA says” phrase that comes up a lot is, “Some asteroids and comets follow orbital paths that take them much closer to the Sun and therefore Earth – than usual.” However, I can find nothing online from NASA saying that. Mostly these nonsense sites just steal from each other; I have found more credible sites with this statement but nothing like this as a direct quotation from NASA. And a few sites use this quote talking about a completely different asteroid. That doesn’t exactly inspire trust.

And a lot of sites are saying 2009 JF1 is huge, 100+ meters across, but again that was never true, even from the very first observations. It was known from day one to be small. That’s why it was never classified as a Potentially Hazardous Object — those need to get within 7.5 million kilometers of Earth and be at least 140 meters wide. This one can get closer, but is too small to be a real threat.

I say this every time I hear about these claims of an asteroid impact: Ask yourself about the site or person making this claim. Are they an astronomer? Does it really come from NASA? Or ESA, or any official astronomical organization?

Remember, too: If I hear of an actual asteroidal threat, you can bet your last penny I’ll be screaming about it here on the blog and on every social media platform I have access to. So if you don’t hear about it from me, you’re probably OK.

And stop going to YouTube channels with names like “NASALies69420SheepleFlatEarth$NFT$” for your science info. Or anything. I will take that as a personal favor.