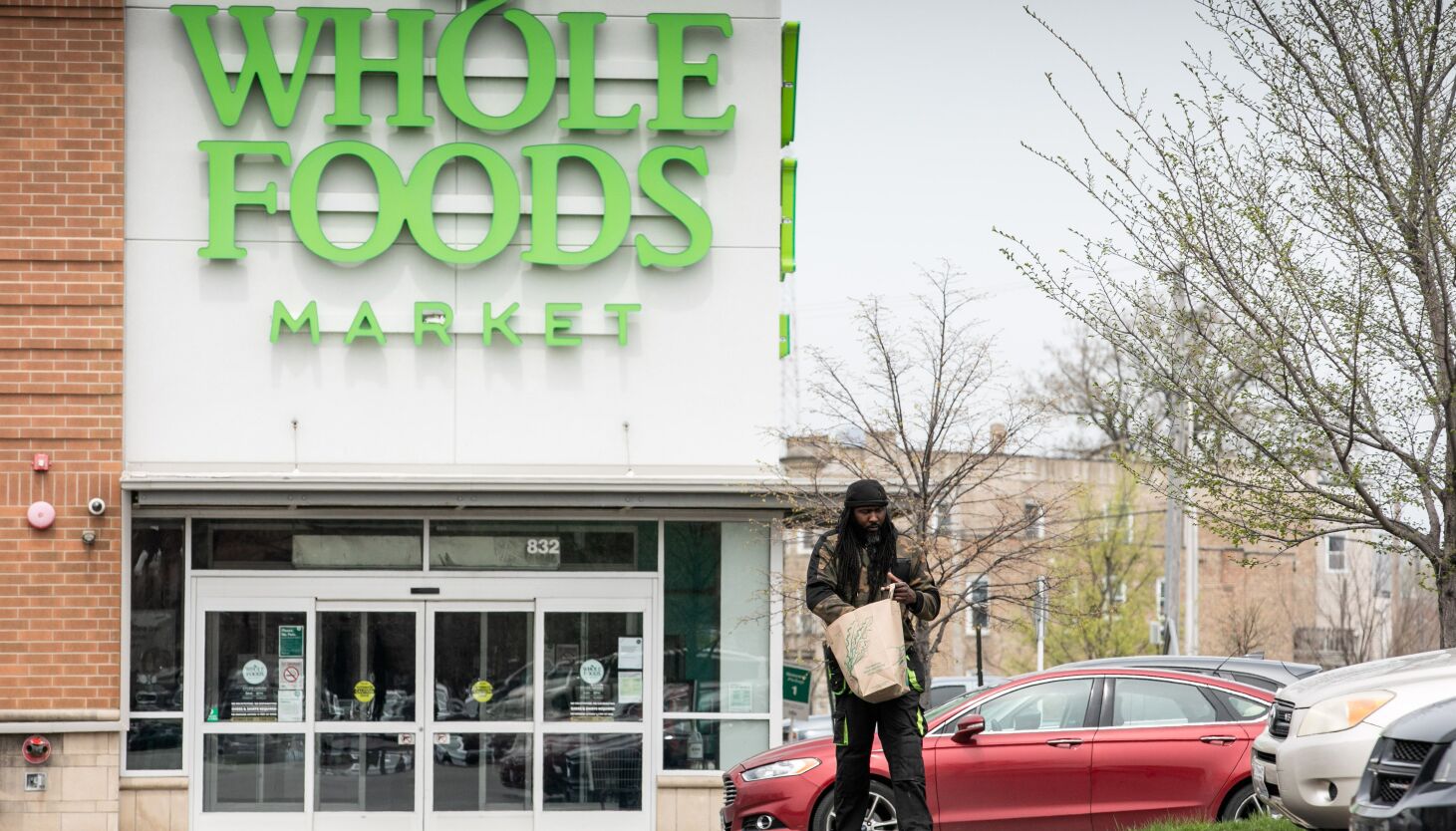 Phillip Backstrol was thrilled when a Whole Foods Market opened in Englewood six years ago. The 65-year-old neighborhood resident prefers to shop there for the variety of organic vegetables.

“I thought it was great,” said Backstrol.

Now, Backstrol will need to drive somewhere else to find that extensive of a selection of fruit and vegetables.

The company on Friday announced plans to close the Englewood store that had opened with great fanfare as the anchor of a major development at 63rd and Halsted streets in a area long considered a food desert.

Another store, in the DePaul University Welcome Center in Lincoln Park, is also among six U.S. stores the chain plans to close in the coming months, although officials set no dates for the shutdowns.

“As we continue to position Whole Foods Market for long-term success, we regularly evaluate the performance and growth potential of each of our stores, and we have made the difficult decision to close six stores,” a Whole Foods spokesperson said in a written statement.

The announcement to close one of the company’s two South Side stores — it has a dozen in Chicago, largely on the North Side — comes just two days after it opened a nearly 66,000-square-foot location at 3 W. Chicago Ave. in the One Chicago high-rise.

The company provided no information on how the two stores being closed have performed financially, although Amazon, which owns Whole Foods, on Thursday announced its first quarterly loss since 2015.

Shoppers at the Englewood location were shocked Friday to hear they were losing not just a major grocer, but also a local hub; the store had been the site of community meetings, wine tastings and other events.

Lashay Shambley, who works nearby at the Chase Bank at 62nd Street and Western Avenue, said she’s not sure where she’ll get lunch now.

“There’s nothing but Popeyes, McDonald’s and Wendy’s,” said Shambley, 21. “I kind of looked toward Whole Foods for like a healthy escape.”

“This is disappointing news that Whole Foods has decided to close the doors on our only grocery store of fresh foods and fresh produce,” said Coleman, who accused the chain of moving to “renege” on its commitment to the community.

“When I think about other communities on the North Side in Streeterville and River North, they have multiple grocery stores. … From Englewood to Edgewater, we should have the same opportunities, the same resources, the same retail opportunities as any other any other no matter what our ZIP code is.”

Since the store first opened, an Aldi and a Go Green Community Fresh market opened along the same block, but those stores don’t have nearly the range of offerings as a full-service grocer.

Still, some said the news was not surprising. While the store initially offered cheaper prices than other Whole Foods locations, many complained the upscale chain was too expensive for the area.

“They said they were going to have lower prices for Englewood but they didn’t make that promise real,” said one nearby resident, who didn’t want his name used.

Ald. Jeanette Taylor (20th), whose ward boundary is across the street from the store, said she’s not at all surprised the store derisively known as “Whole Paycheck” was closing.

“Whole Foods was just expensive. And a lot of people did not shop there,” she said.

“I got a raise, and I can’t afford Whole Foods. It’s not cheap.”

The loss of a grocery store aside, the business was a big draw for the area. Workers at other businesses in the 5.5-acre Englewood Square development — which includes a Starbucks and a Chipotle — said the store definitely brought in customers.

“Just like any place, [shoppers] look around and can see another store and you want to see what they have,” said Malcom Silas, an employee at DTLR fashion outlet, who said shoppers clutching Whole Foods bags often came to his store a few doors down.

Still, while Silas said his store will likely lose some business, he doesn’t think it will have a big impact overall.

The somber mood Friday was a far cry from the excitement in 2013 after Whole Foods agreed to open in the impoverished area after a relentless push from then-Mayor Rahm Emanuel.

The project depended on an $11 million city subsidy for site preparation. In addition to that tax-increment financing, Englewood Square relied on $15 million in subsidies from the New Markets Tax Credit Program launched by President Bill Clinton in 1999.

An additional $500,000 came via crowdfunding, the first time it was used to finance new commercial construction in Chicago.

What’s more, both developer and general contractor Ujamaa Construction are African American-owned; as is Power Construction, a contractor that did the Whole Foods build-out.

At the September 2016 grand opening celebration, people waited in long lines to get inside the 18,000-square-foot store.

Emanuel and Whole Foods co-CEO Walter Robb were joined by a host of politicians, including U.S. Rep. Bobby Rush, D-Ill., and leaders of community organizations that worked closely with the project, including Teamwork Englewood and the Resident Association of Greater Englewood.

Whole Foods officials have previously said the store has about 100 employees, including many who lived in the area. The store also stocked a number of products from local businesses.

“It showed real promise, and I think it continues to show real promise of how retailers could meet community needs and work with the community to help design something that was unique and important,” Cecile DeMello, executive director of Teamwork Englewood, said Friday.

Emanuel, now U.S. ambassador to Japan, did not respond to a text message seeking comment. His former commissioner of planning and development, David Reifman, refused to comment.

Deal requires grocer on site through 2027

What comes next is unclear.

Before the city land that includes Whole Foods was sold to developer Leon Walker for $1, the City Council approved a redevelopment agreement that requires a grocery store to be located on that parcel through 2027.

That means Walker will have to find a grocer to occupy the site, sources said.

Walker confirmed in an interview Friday that officials are actively looking for a new tenant. No timeline has been set.

“We’re working together with the city and the aldermen and the community to find the best replacement operation to take advantage of this opportunity,” he said.

Ald. Taylor said said it’s imperative the city either attract another food chain or develop “our own home-grown grocer.”

“We’ve got to do something, though. We cannot waste that TIF money. And the community needs a grocery store.”

Mayor Lori Lightfoot said in a statement her administration “will work to repurpose these locations in a way that continues to serve the community and support the surrounding businesses. We as a city will continue to work hard to close food deserts that meet community needs with community at the table.”

Coleman said they will look into what other food deserts have done to provide for residents while maintaining an area attractive for corporate investment.

“We are going to make sure we have a grocer not only until 2027 but to 2097 so that my grandchildren’s children will be grocery shopping in Englewood.”

Despite the setback, Walker argued the venture has been a boon.

“This whole project has been about inspiring hope and it has done that,” he said. “ … We’re finally bringing the density that an operator needs to be ultimately successful. It took too long to get the density, but now this [mayoral] administration understands that urgency and is making the investments so that we can get the bellies and the feet and the people there to help support and make the retailers successful.”

The blow from the Whole Foods closing will be softened by another project known as “Englewood Connect,” essentially the second phase of Englewood Square. It’s part of Lightfoot’s signature Invest South/West initiative, which Walker also praised.

City planning documents describe the $10.3 million plan as an “eco-food hub” that will “establish culinary-related uses that empower employees and feed local residents.”

The goal is to utilize an old firehouse at 6204 S. Green St.

“The project will adaptively re-use the landmark Green Street fire station as the commercial kitchen, establish a business incubator to train start-up businesses, create a community ‘living room’ for local events and repurpose vacant land with hoop houses that provide year-round farming operations,” according to a description posted on the Planning and Development website.

“A public plaza will serve as its focal point. Later phases will include a flexible market space and an event center.”

City assistance for the project — in the form of a TIF subsidy and land — is expected to go before the Community Development Commission as early as May 10.

While Whole Foods did not provide an update on how many employees would be affected in Englewood or Lincoln Park, the company spokeswoman said all “eligible Team Members will find positions at our other locations.”

Store workers declined to comment, although they were surprised by the announcement, too —at least one just started a new job at the Englewood store on Friday.

“Amazon must now take clear steps to protect those workers as they transition to new opportunities,” Lightfoot said. “Having been in both of those stores many times over the years, I saw first-hand how those workers gave their heart and soul to make the stores a success.”

Promised Coleman: “I guarantee you that that grocery store will not be closed very long and we will have even more job opportunities in our communities in the 16th Ward. … Englewood is a community that will still rise.”