After trading back to No. 32 pick, Vikings select Georgia safety Lewis Cine in NFL draft 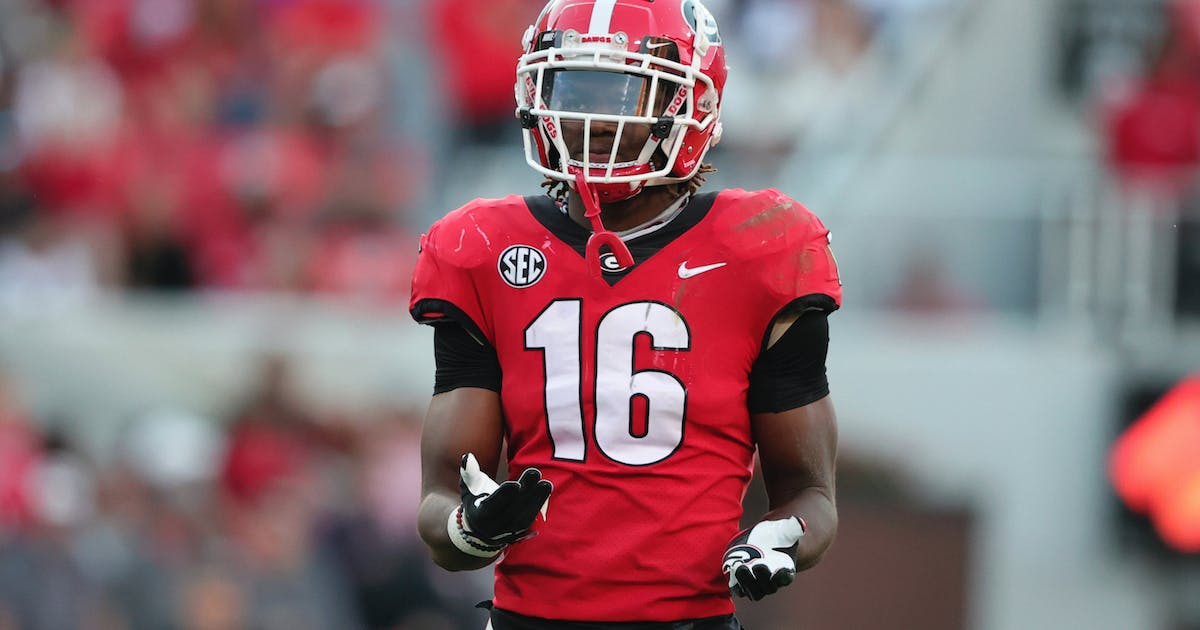 The Vikings traded down 20 spots and selected Georgia safety Lewis Cine with the last pick in the first round of the NFL draft on Thursday night.

Cine became the fifth defender from Georgia’s national championship team drafted in the first round, heading to the Vikings after the Jaguars selected pass rusher Travon Walker with the first pick, the Eagles took defensive tackle Jordan Davis 13th overall and the Packers used both of their first-rounders on Bulldogs defenders (linebacker Quay Walker and defensive tackle Devonte Wyatt). Georgia became the first team in NFL history to have five defensive players selected in the first round.

In the 6-foot-2 Cine, the Vikings added a hard-hitting safety to their defense with Harrison Smith heading into his 11th season in the league and second-year man Cam Bynum trying to win the job next to Smith after Xavier Woods left in free agency. Cine broke up nine passes in his final year at Georgia to earn third-team All-America honors, and ran a 4.37-second 40-yard dash at the combine.

“The guy made a lot of plays on really the best defense in college football,” Vikings coach Kevin O’Connell said. “When we asked [the Georgia players], ‘Which one of your teammates would you love to bring with you?’ Lewis Cine’s name came up a lot.”

He said the Vikings could look at ways to put Cine, Smith and Bynum on the field at the same time, adding, “There’s a lot of things you can do to be dynamic on defense.”

With players like Washington cornerback Trent McDuffie, Notre Dame safety Kyle Hamilton and Florida State pass rusher Jermaine Johnson still available, the Vikings traded back 20 spots from No. 12, getting picks Nos. 32, 34 and 66 from the Lions in exchange for the 12th overall pick and the Vikings’ second-rounder (No. 46 overall).

General manager Kwesi Adofo-Mensah said “there was a thought” to making a pick at No. 12, but the Vikings leaned on their pre-draft process to make the trade, ultimately taking a player the GM said the Vikings had pegged between picks No. 13 and 19.

He said the Vikings got calls about the 32nd pick, adding “there was a curveball right at the end” before they decided to pick Cine.

The Lions picked Alabama wide receiver Jameson Williams with the Vikings’ selection. The move gave Minnesota three picks on Day 2 of the draft. Adofo-Mensah said the Vikings had looked at Williams, among others, with the 12th pick, but decided the trade offer from the Lions was a net positive.

Draft charts that measure the value of each pick were divided on whether the Vikings won the trade, or whether they should have gotten more from their division rival in exchange for the chance to move up 20 spots.

The 32nd pick — which the Lions obtained from the Super Bowl champion Rams in last year’s Matthew Stafford trade — made it the first time the Vikings had the final choice in the first round since 2014, when they traded back into the first round to select Teddy Bridgewater.

In Adofo-Mensah’s first draft as general manager, he orchestrated a maneuver that had become familiar to Vikings fans in Rick Spielman’s final drafts: trading back.

It was the third year in a row the Vikings traded back in the first round. They moved back six spots with their second first-round pick in 2020, taking cornerback Jeff Gladney 31st overall. Last year, they moved back nine spots from No. 14 to No. 23 before selecting left tackle Christian Darrisaw.

Fans at the Vikings’ draft party at U.S. Bank Stadium initially reacted to the move with confusion, and then irritation when they saw the team had moved back to the final choice of the first round.

Adofo-Mensah, who came to the NFL after working on Wall Street, said at his pre-draft news conference on Tuesday he thinks “volume is really important” in the draft — though he added the data wouldn’t support the idea of stockpiling late-round picks at the expense of a first-rounder.

The move, then, might have been driven by an effort to add more picks in the top 100 choices, an idea that is generally supported by data.

“You’ve got a big team and you’ve got depth needed and you’ve got things you’ve got to fill out, so I think volume is really important,” Adofo-Mensah said Tuesday. “Now, I would push that whatever chart anybody is using, there’s no amount of seventh-round picks that will equal the value of a first pick. You could do that with a thousand seventh-round picks and that’s not going to equal the value because there’s a specialness that comes with that first-round pick that isn’t replaceable very easily.

“Those are things you’ve got to go back-and-forth with and think of in your mind. It’s not a simple math equation. I love these conversations now as a GM because I used to be one of the people building those charts, and I kind of laugh with people, ‘I don’t know. Let’s just talk about this and use those [charts] as a backboard, but let’s talk about this and kind of understand the dynamics that go forth.'”