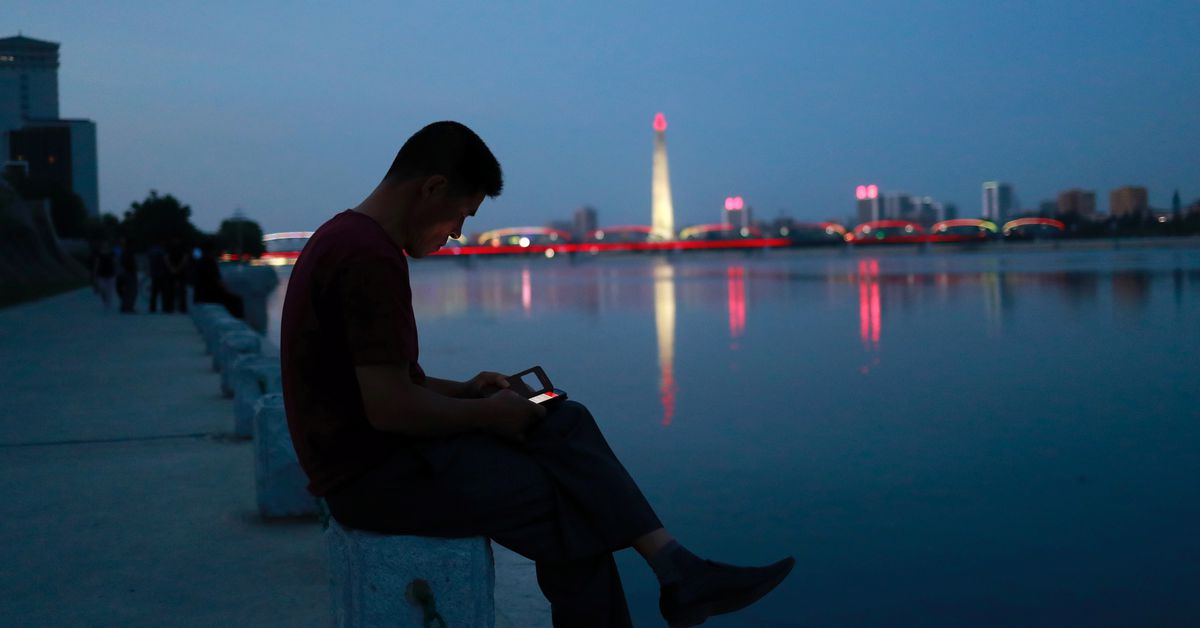 A man uses his phone as he sits along the Taedong river in Pyongyang, North Korea, September 12, 2018. REUTERS/Danish Siddiqui

SEOUL, April 28 (Reuters) – Despite North Korea intensifying efforts to stop citizens from seeing information coming from outside the country, a few tech savvy individuals are managing to circumvent tight government controls on smart phones, a U.S. based group said in a report.

“The scale of the hacking still appears to be minor, but recent changes to North Korean law indicate national authorities view it as a serious problem,” Lumen, a U.S.-based non-profit founded to provide North Koreans with access to uncensored information and media, said in report issued this week.

Most of the knowledge needed to hack the phones came from North Koreans who had been sent to China for work, often in software outsourcing businesses, the report said.

Smartphones have proliferated in North Korea, but very few people are allowed to access the global internet. Devices in the country are required to have government apps and other controls that monitor use and restrict access.

Working together with ERNW, a Germany-based independent IT Security service, the report’s authors examined North Korean smartphones and tablets for government controls, and interviewed two defectors who said they had been able to circumvent those restrictions before they fled the country.

The research overturns assumptions that, shut off from the internet, North Koreans lacked the knowledge and tools to be able to mount an effective attack on state information control mechanisms, the report concluded.

The goal of the hacking was to bypass phone security and be able to install different applications, photo filters and media files that would otherwise not be permitted.

The report said the resale value of a phone could also be increased by accessing and deleting screenshots automatically taken with the “Trace Viewer”, an application in each North Korean smartphone that takes random screenshots and locks them away from the user, to try and dissuade illicit activities.

The Lumen report said it is possible that state engineers responded to the techniques described by the hackers by disabling the USB interface used to access the phone.

North Korea also disabled Wi-Fi access on devices and only reintroduced it recently, once controls such as SIM cards, passwords, and supported devices had been designed to ensure Wi-Fi could only be used for approved purposes, the report said.