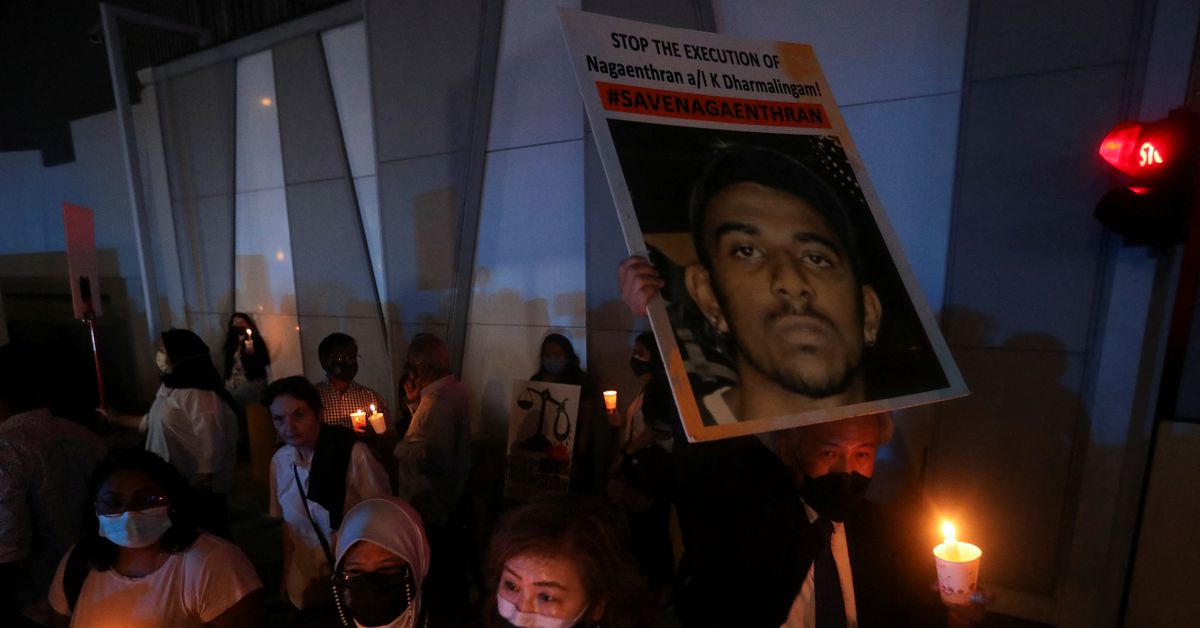 SINGAPORE, April 27 (Reuters) – Singapore executed a Malaysian man convicted of drug trafficking on Wednesday despite appeals for clemency on the grounds that he had an intellectual disability, his family said, in a case that has drawn international attention.

Nagaenthran Dharmalingam, 34, had been on death row for more than a decade for trafficking 44 grams (1.5 oz) of heroin into Singapore, which has some of the world’s toughest narcotics laws. His lawyers had filed multiple appeals against his execution saying he was intellectually disabled.

His brother Navin Kumar, 22, said by telephone the execution had been carried out and said the body would be sent back to Malaysia where a funeral would be held in the town of Ipoh.

A Singapore court on Tuesday turned down a legal challenge put forward by Nagaenthran’s mother, clearing the way for the execution by hanging.

At the end of Tuesday’s hearing, Dharmalingam and his family reached through a gap in a glass screen to grasp each others’ hands tightly as they wept. His cries of “ma” could be heard around the courtroom. read more

About 300 people held a candlelight vigil at a Singapore park on Monday to protest against the planned hanging.

Anti-death penalty group Reprieve in a statement described the execution as a “tragic miscarriage of justice”, but also said it felt it could be a “watershed moment” for opposition against the death penalty in Singapore.

A vigil was also held outside the Singapore High Commission in Kuala Lumpur on Tuesday evening appealing for clemency, with one protester carrying a placard reading “Singapore spare Nagaenthran the noose.”

His lawyers and activists have said Nagaenthran’s IQ was found to be 69, a level recognised as an intellectual disability. However, the courts determined he knew what he was doing at the time of his crime, and ruled there was no admissible evidence showing any decline in his mental condition.

The Malaysian government said in a statement it respected Singapore’s legal system, but noted it had sent another letter this week to ask the city-state’s government to reconsider and commute the sentence.

While Malaysia has similar penalties for drug trafficking, the country has imposed a moratorium on all executions since 2018, pending efforts to reform capital punishment laws.

“The Singapore authorities must immediately stop the current wave of executions and urgently review legislation on the use of the death penalty, with a view towards abolition, in light of this shocking case,” Amnesty International said in a statement.

The Singapore government says the death penalty is a deterrent against drug trafficking and most of its citizens support capital punishment. read more

Reporting by Chen Lin in Singapore and Rozanna Latiff in Kuala Lumpur, Writing by Ed Davies; Editing by Stephen Coates