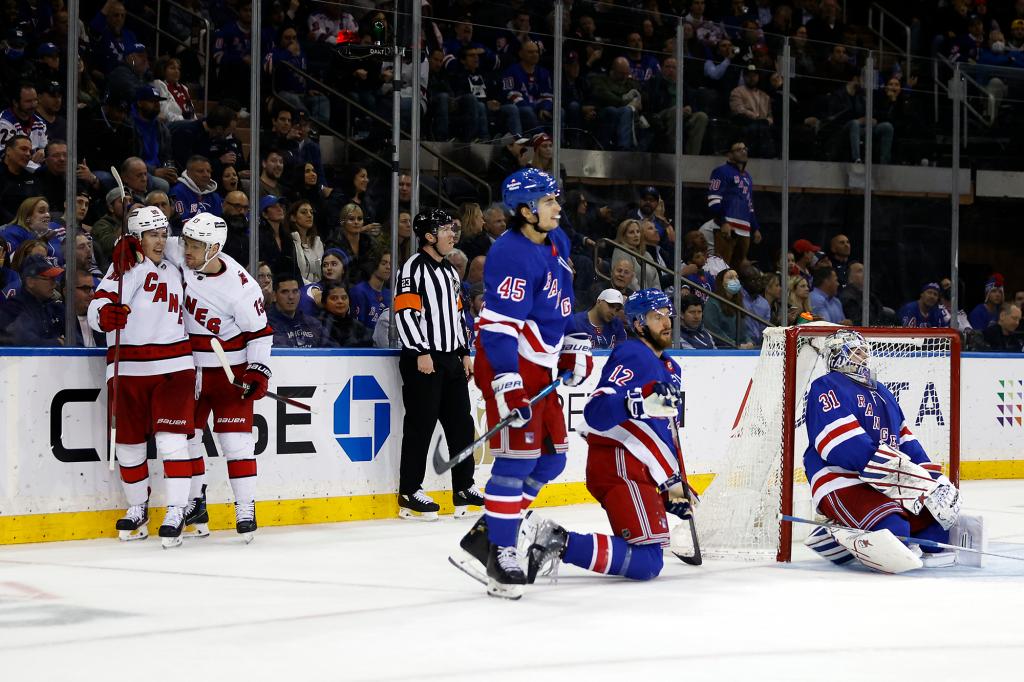 The Rangers have gone game-to-game all season long. That approach, fostered by head coach Gerard Gallant and embraced by the team, has generated one of the most pleasantly surprising seasons in franchise history.

There are two games to go, a playoff spot was long ago clinched and it was not until a 4-3 Garden loss to Metropolitan Division-clinching Carolina on Tuesday night that the Blueshirts were eliminated from the first-place chase.

So, it is second place for the Rangers and a first-round matchup against either the Penguins or Capital that will begin with home-ice advantage early next week. This final week and these final two games should be about one thing and one thing only: preparing and protecting the Blueshirts for next week. It must be about minimizing risk and not maximizing victories.

If that hadn’t been the contingency plan before this defeat, it sure should be after the franchise’s playoff fate flashed before its very eyes when both Artemi Panarin and Andrew Copp left the match midway through the second period and did not return.

Gallant later clarified that both all but certainly would have returned had this been next week, the coach stating that he was being “cautious.” When asked if he would take that approach for the final two contests, against Montreal on Wednesday and Washington on Friday, Gallant answered in the affirmative. There was no other answer.

The Rangers have had a handful of extra players on the roster since the trade deadline. They also can recall four players from the AHL Wolf Pack, who did not make the playoffs and whose season has ended. It is time for general manager Chris Drury to implement these recalls and fit as many of them and the spares into the lineup so that the vets who have grinded through the first 80 games get some R&R.

In other sports, that would not even be a discussion. It would be automatic. To their detriment, our other major professional sports leagues have been infected by load-management. The NHL is still too macho-culture for that. If you ask out, you are probably on your way out for good. It is a badge of honor to play in all 82 games. In 2013-14, Dan Girardi was rested for Game 82 in Montreal after having played the first 81. He was seething.

In addition, there is an intriguing scenario in play for the finale Friday night. It is possible that a Rangers victory would mean a first-round matchup against the Penguins while a defeat would mean a series against the Capitals.

I recognize that you cannot bubble-wrap players. But I am sorry (no, I’m not), I simply do not trust that Tom Wilson and his teammates will play with honorable intentions on Friday night. I do not trust the Washington operation, which has historically enabled the recidivist headhunter. Legal restraints prohibit me from accusing the winger of purposefully and knowingly injuring opponents, but I have sure never seen him play with a conscience. Almost a full year later, this thing has a chance to come full circle. The last thing the Rangers need is to get enmeshed in a scene that produces injuries or suspensions.

I suppose there is another side to this, that the Rangers might be perceived as having turtled, which might become a theme during a hypothetical playoff matchup against Washington. I imagine that, in the macho corners of hockey’s collective mind, the Rangers might take that into consideration even though they should know that while sticks and headshots can break their bones and brains, words can never harm them.

Here’s what I would say: Discretion is the better part of valor.

Again, the only consideration from now through Friday should be how this week will impact next week. The Rangers have played well enough, consistently enough, deep enough into the season to have long since established a foundation for the playoffs. It no longer is about game-to-game.

At this moment, it is about Game 1.