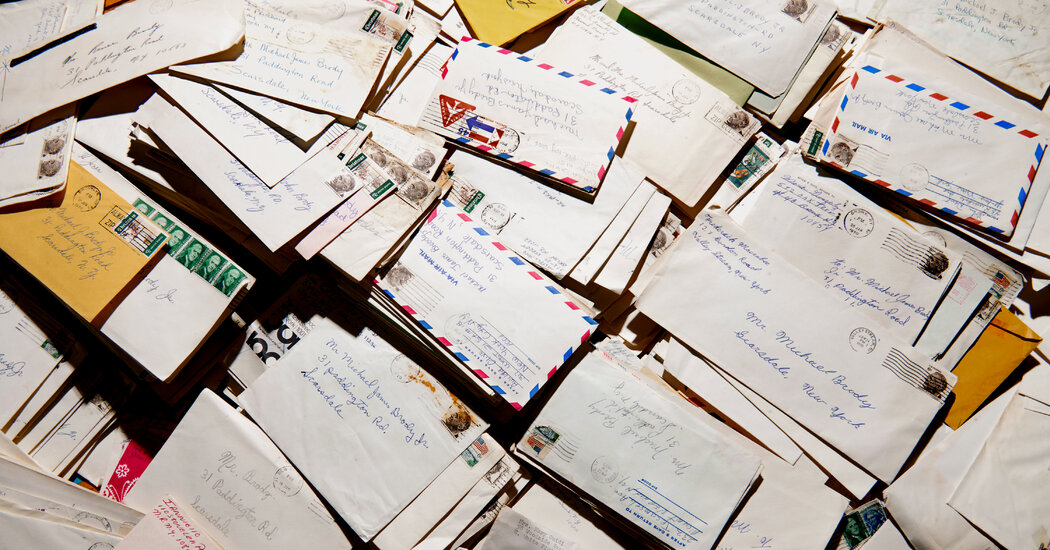 One day in early January 1970, Michael James Brody Jr. stepped off a Pan Am jet at John F. Kennedy Airport and into what would be one of the new decade’s shortest, strangest 15 minutes of fame.

Brody, the previously obscure 21-year-old heir to a margarine fortune, was returning from his honeymoon in Jamaica, and, as a grand romantic gesture, had impulsively bought out every seat on the plane so he and his bride could fly home alone. After landing, Brody, wearing bell-bottoms and large green sunglasses, announced to assembled reporters that he would be giving away his $25 million fortune to ordinary people to spread love and “cure the problems of the world.”

Over the next 10 days, the shaggy haired, dreamily handsome Brody appeared on newspaper front pages and “The Ed Sullivan Show,” where he strummed a Bob Dylan song on a 12-string guitar. Crowds swarmed his rented house in Westchester County and office in Midtown Manhattan.

And then there were the letters — flooding in by the tens of thousands, and piling up so fast the post office threatened to burn them.

Almost immediately, Brody’s checks began bouncing, and his life unraveled. Soon he disappeared from the headlines, and all but vanished from historical memory.

But paper has a way of sticking around. And on a recent morning, Thai Jones, a curator at Columbia University’s special collections library, picked up a scalpel-like letter opener, reached into a box of jumbled mail and took a deep breath.

“Here we go,” he said before slicing into an envelope with a return address on Queens Boulevard in New York, marked “Personal and confidential — to be opened by addressee only.”

“Dear Mr. Brody,” Jones began, reading quickly through a neatly typed plea for $1,000 from a woman whose husband had died and left behind a mountain of bills.

He opened another letter, written in a jagged scrawl, from a man in Brooklyn struggling to support six children on $125 a week. “To prove I’m truthful,” the man wrote, “you can come visit my apartment anytime.”

More fascinating tales you can’t help but read all the way to the end.

Next was a postcard advertising a limousine service. “The archives,” Jones said wryly, “are full of junk mail.”

It was Jones’s first in-person glimpse of a trove of some 30,000 letters — the vast majority unopened — that were donated by the filmmakers behind “Dear Mr. Brody,” a documentary that begins streaming on Discovery+ on April 28. In the movie, the letters (some read aloud by their authors, whom the filmmakers tracked down) provide a sometimes emotionally devastating counterpoint to the wild tale of Brody’s Age of Aquarius grandiosity.

They are part message in a bottle, part voyeuristic parlor game, part potential bonanza for historians.

“It’s very, very unusual to get everyday people’s stories into the archives in a way like this, with thousands of people writing and talking about their lives at one moment in time,” Jones said.

But the letters also pose some scholarly conundrums, starting with a basic question: Just how does an archive deal with a mountain of unopened mail?

The letters now at Columbia resurfaced a decade ago, when Melissa Robyn Glassman, a producer of “Dear Mr. Brody,” was sorting through a storage locker belonging to the Hollywood producer Edward R. Pressman (“Badlands,” “Conan the Barbarian,” “Wall Street”), who was preparing to donate his archive to the Academy of Motion Picture Arts and Sciences.

Up on a shelf, she noticed some boxes labeled “Brody letters.” Inside were piles and piles of letters, all addressed to the same person, all postmarked January 1970 — and all unopened.

“I asked Ed’s wife about them,” she recalled in a joint video interview with Keith Maitland, the documentary’s director. “She said, ‘Oh, I’ve been trying to get Ed to throw them away for years!’”

Pressman had acquired the letters in the early 1970s, along with the rights to a screenplay about Brody, which he envisioned turning into a Billy Wilder-style black comedy. (Possible title: “The Last Flower Child.”) “I imagined Richard Dreyfuss” as the star, Pressman said in an interview.

Brody’s story, which unfolded over the course of less than two weeks, certainly had no shortage of crazy twists. A few days after appearing on “Ed Sullivan,” he got a recording contract and cut several tracks, including one called “The War Is Over.” “I’m not giving away money,” he told a CBS reporter. “What I’m giving away is good feelings for mankind.”

But the story took a darker turn. An article in The New York Times the morning after his “Ed Sullivan” appearance quoted Brody as saying he had announced his big giveaway “while tripped out on drugs.”

“What a joke I’ve pulled on the world!” he told the reporter. (An official from his bank called his claims about the size of his fortune “gross exaggerations.”)

News footage in the documentary shows him flipping the bird at crowds outsides his window and bitterly denouncing the sometimes terrifying hordes asking for money. “They’re sick,” he told an interviewer. “They don’t need money. What they need is food, shelter and love.”

In an interview in the film, a friend of Brody’s described tagging along as he tried to land a chartered helicopter on the White House lawn, in a bid to pay Richard Nixon and the North Vietnamese government $1 billion to end the war.

Initially, Glassman wanted to revive the effort to make a feature film. But what kept pulling at her was the letters, which she began taking home at night. “I became obsessed,” she said. “I started opening them with my mom.”

Maitland, the husband of an old friend she hired to take photographs of them, had a similar reaction. “It wasn’t one story,” he said of the Brody tale. “It was a million stories.”

And the letters in Pressman’s storage locker, it turned out, were just the tip of a very large iceberg. The filmmakers tracked down Brody’s son, who turned out to have about 100,000 more, which had been found stashed in a toolshed and then saved by a screenwriter who had also tried to make a biopic.

The Paradox of a Countercultural Era

“Dear Mr. Brody” offers kaleidoscopic shots of envelopes elaborately decorated with doodles and stickers. Most of the still-unopened letters at Columbia are more prosaic, though plenty have peace signs drawn over the seals.

An hour and a half of opening yielded many stories of debt, illness and desperation. But there were also plenty of children asking for money for toys, pleas for help with college tuition or a down payment, requests for money to start “a hard-rock radio station in a university town” or an off-the-grid newspaper in Alaska — or to just live like Mr. Brody.

“Let’s face it,” a 24-year-old woman in the East Village wrote, “we too would like to go to an island and make love!”

In the documentary, the filmmakers zero in on heart-tugging individual stories, like the mother and daughter who each wrote letters, unbeknown to each other. But they also uncovered some striking clusters that point to broader themes. One group of letters from the children of migrant agricultural workers in Immokalee, Fla., written as a school assignment, bluntly describe the violence and alcoholism rampant in their town.

One envelope held an elaborate pitch from a Black film producer proposing to join with a dozen craftspeople and start an all-Black film studio, complete with a detailed business plan and scripts for four projects.

“They said, ‘We’re just looking for someone to believe in us enough,’” Maitland said. None of the films appear to have ever been made, he said, and the aspiring filmmakers, now all dead, left little other trace.

And then there were the sheer larks. Through a colleague, Maitland heard that the young Paul Stanley, the future guitarist of KISS, had written Brody a letter.

It remains to be seen how historians will use the vast trove — or how they will even know what to look for. For Jones, a scholar of the ’60s, the letters illustrate the paradox of an era defined in popular memory by a countercultural ethos that didn’t penetrate very deeply into society.

Brody, whom Jones described as “hyper-privileged,” had access to “all the most beautiful things, including this beautiful shiny idea that you could use wealth to solve literally all the problems of the world,” the curator said. “But what he got back, and what I sense shocked him, is how little of that had touched the lives of the vast majority of people.”

Donating the letters to an archive, the filmmakers said, was a goal from the beginning. Several archives were interested, but with a stipulation: If the letters were donated unopened, they would have to stay that way.

Jones said he could imagine getting interested parties together for “a letter-opening party,” to make a dent in the overwhelming pile. “But in the day-to-day use of the reading room,” he said, “we’ll need to take a more buttoned-down approach.”

Opening the letters may be magical, but it’s also exhausting. After an hour and a half, Jones said he felt drained.

But it was also hard to stop. “There’s a rule with archival research,” he said. “The last thing you open will be the best.”